- September 22, 2019
Our coverage of Mid-South in 1979 continues with a look at the week ending September 30th: a new Monday night tradition begins, Mike George is a champ champ ... champ & more!

Here's a look at the talent roster along with their SPOT ratings for the week. Starting this week, Tri-State (McGuirk) will be covered in a separate post. 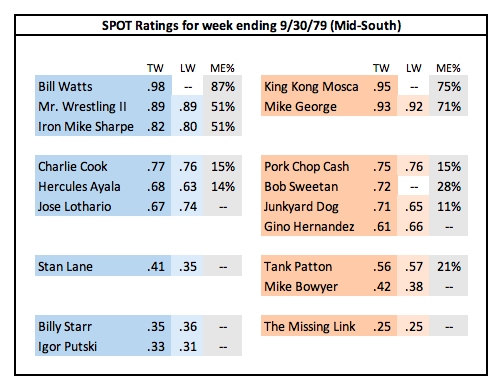 The split between Watts and McGuirk had an interesting side effect on the weekly schedule for Mid-South Wrestling. Historically, Tulsa had been the "A" town on Monday nights. With Watts now running Louisiana and Mississippi, he needed a town to run on Mondays. New Orleans had been run primarily on Thursdays dating back many years, but Watts decided to move it to Monday. Monday nights at the Municipal Auditorium would end becoming huge for Watts, particularly in Junkyard Dog's heyday as a babyface in the early 80s. This week may have been the first time the Auditorium was run on a Monday. Watts loaded up the card, advertising himself & Dusty Rhodes to face Ernie Ladd & Ken Patera in the main event. Wahoo McDaniel took Dusty's place in the match, which was a victory for the babyfaces. Ladd came in from Georgia and Patera from Mid-Atlantic for the one shot. Wahoo had just finished up a run in Mid-Atlantic and was working in spots for Southwest and Georgia.

A tag team battle royal was held in Shreveport to crown the first-ever Mid-South Tag Team champions. The newspaper report from the show is very confusing, so I'll just state that Mike George & the returning Bob Sweetan became the first champs. An unadvertised Buck Robley returned on that show as well, though he won't appear on the weekly SPOT charts until next week.

George defended his North American title against Mr. Wrestling II in Jackson in a match with the disqualification rule waived (meaning if II won by dq, he would win the title). George was also advertised to defend against Iron Mike Sharpe in Baton Rouge, though results from that show in the newspaper didn't list the match.

On Saturday night in Greenwood, George defended the Mississippi state title against King Cobra, who for now was a part-timer primarily working the Mississippi towns. This means that at this point in time, Mike George was the North American champ, the Mississippi champ AND one-half of the Mid-South Tag Team champs. One title that George did not lay claim to was the Louisiana state title; that belonged to Iron Mike Sharpe. Sharpe defended against King Kong Mosca in Lafayette.

Hercules Ayala and Junkyard Dog continued their respective climbs up the cards. They were on opposing sides of a tag team feud, with Ayala & Charlie Cook taking on Pork Chop Cash & JYD in New Orleans, Jackson and Baton Rouge.