- September 22, 2019
Our coverage of 1982 continues with a look at the week ending September 26th: taped fist matches, a Freebird attempts to collect a bounty, the Mississippi state title changes hands, The Grappler finds a new friend & more! 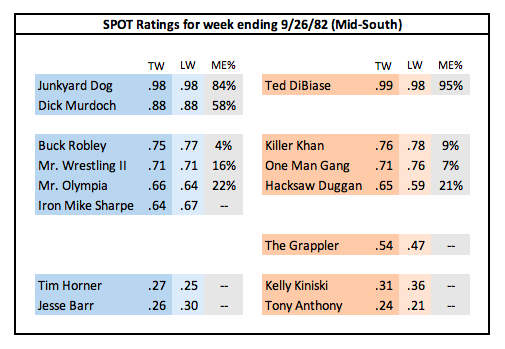 Baton Rouge and Jackson this week were headlined by taped fist matches between Junkyard Dog and Ted DiBiase. These were presumably non-title matches won by JYD. DiBiase did defend the North American title successfully in Shreveport and New Orleans against Dick Murdoch.

Killer Khan defended the Mississippi state title against Mr. Olympia in Jackson. While results for this show are not available, title histories online indicate that Olympia won the title here.

Scandor Akbar continued his feud with Buck Robley, with some of the matches this week being advertised as bounty matches. Attempting to collect the bounty in Shreveport and New Orleans was Terry Gordy. Gordy came in for the week from Georgia. In addition to the 2 bouts with Robley, he also faced Mr. Wrestling II in Baton Rouge and worked a six-man tag in Jackson. Gordy was a babyface in Georgia at the time, so it's interesting to see Watts use him as a heel here. Since Gordy was just in for the week, I did not include him in the above chart, but his rating would have been a .70, placing him in between One Man Gang and Hacksaw Duggan in the upper mid-card.

Speaking of Duggan, this is the first week his SPOT rating was above a .60, which is my theoretical cut-off point between "mid-carders" and "upper mid-carders". This is his twelfth week in the territory, so you can get an idea of how slowly he was moved up the cards.

No newcomers are listed in the SPOT chart, but there was a new face* on the New Orleans card. There's an asterisk because a) we didn't get to see his face, and b) he wasn't new. Grappler II defeated Jesse Barr in the opening match in New Orleans. Grappler II was Tony Anthony, who had been working here for about a month and a half as himself. He spends a couple of weeks working either as Anthony or as Grappler II depending on the town. By next week, he's working as Grappler II more often than as himself, so I will remove Anthony from the chart and replace him with Grappler II. A minor bookkeeping note: when I calculate the SPOT ratings for Grappler II and Anthony, I treat them as two separate people. It's not a Stagger Lee/Midnight Rider situation where the fans know who it is under the mask.