- September 10, 2019
Our coverage of 1979 continues with a look at the week ending September 16th: Watts battles King Kong, a feud from Houston is imported into the territory, McGuirk runs his first "solo" show & more! 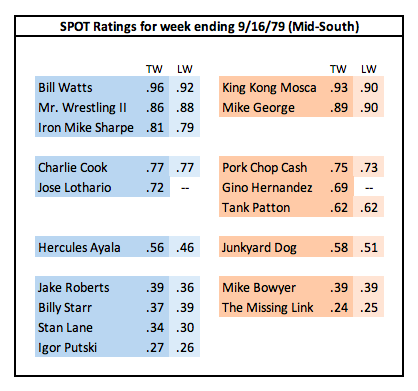 Notes/Analysis: Bill Watts and King Kong (Angelo) Mosca headlined the cards this week, with singles bouts in Alexandria, New Orleans and Shreveport. In the other cities, they were on opposite sides of tag team bouts. Watts would team with Iron Mike Sharpe or Mr. Wrestling II and Mosca would team with Tank Patton or Ernie Ladd. Ladd was still full-time in Georgia but was booked here sporadically.

Gino Hernandez and Jose Lothario were not quite full-time here, but worked here enough that I have included them in the SPOT ratings. Gino and Jose were feuding in Houston on Paul Boesch's shows. Houston at the time was closely affiliated with Fritz Von Erich's promotion, but Gino and Jose were only working Houston and not the regular Von Erich towns. Watts brought the feud to his territory starting with the Lake Charles show. Interestingly enough, Lake Charles had been run out of Fritz' East Texas office through 1974. McGuirk/Watts ran it for several months in 1975, then I believe it was not run again until earlier in 1979.

In known title matches this week, Mike George defended the North American title against Iron Mike Sharpe in Alexandria and against Mr. Wrestling II in Jackson. George also faced II in New Orleans (with II winning by DQ) in what was likely a title match, but the results I have don't specify one way or the other.

Charlie Cook faced Pork Chop Cash in Texas death matches in Alexandria and Jackson. Cook also faced Tank Patton in a bunkhouse rules match in Shreveport. Other matches of note included Mr. Wrestling II facing Junkyard Dog in Alexandria and JYD facing Jake Roberts in Jackson, New Orleans, Lafayette and Lake Charles. It should be noted that Stan Lane subbed for Roberts in New Orleans while I don't have results for any of the other cards that match was advertised for. JYD and Jake had wrestled each other numerous times in Stampede earlier in the year. Sometimes younger wrestlers were matched up with familiar opponents to make them feel comfortable, and sometimes they were put up against veterans so they could learn and improve. JYD being booked against II and Roberts this week are examples of both those scenarios.

Leroy McGuirk ran Tulsa on Monday this week. In addition to Brian Blair, Sugar Bear Harris and Troy Graham, all of whom worked Tulsa the previous week along with the "Watts crew", Leroy brought in several new faces to fill out the card. The main event saw David & Kevin Von Erich take on Sugar Bear & Oki Shikina for the U.S. Tag Team titles (I don't have results but believe Sugar Bear & Shikina won the match, or at the very least were billed as champions afterwards). The semi-main was a match between Les Thornton and Don Bass that was billed as a tournament match for the Junior Heavyweight title. Other wrestlers on the card were Jim Wright, Phil Hanson, Tom Shaft and Mack Alberts.

David, Kevin and Thornton were brought in from East Texas. They would all come back for occasional appearances but would not be considered regulars here. Both Shikina and Shaft had been wrestling for the Culkins' Mississippi-based promotion before it folded in August. Prior to coming here, Don Bass' last known whereabouts had been in Central States in June.

It should also be noted that ticket prices for this show were drastically reduced and the card billed as a "Special Bargain Night". Ringside seats, which had been $5, were reduced to $3. All other tickets (previously between $2 and $4) were priced at just $2 for adults and $1 for children.

It will be a couple more weeks until McGuirk is running enough shows for me to start calculating SPOT ratings, but I'll continue to keep tabs on his shows and the crew until that time.
1979 Mid-South 1979 Tri-State