- September 01, 2019
Our coverage of 1979 continues with a look at the week ending September 9th: what is believed to be the first "Mid-South" show, three new faces work Tulsa (and only Tulsa), Watts makes the towns, Mike George juggles the title belts & more! 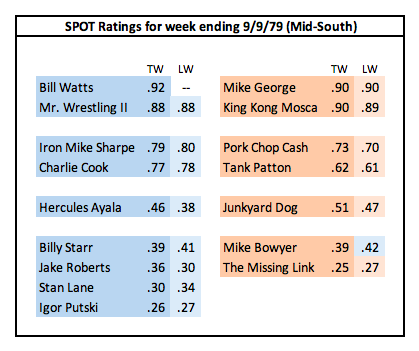 Notes/Analysis: It is generally stated that the "first" Mid-South Wrestling house show was the Tuesday show in Alexandria. What is clear from looking at the card for Monday in Tulsa is that McGuirk was at least in some fashion involved with it. The Tulsa card features the regular crew that had been working in the territory plus three new faces, Brian Blair, Sugar Bear Harris (Jim "Kamala" Harris) and Troy Graham. These three wrestlers did not appear on any other cards during the week, and all were victorious in their matches against "Watts" talent (Blair beat Tank Patton, Graham beat Mike Bowyer, and Sugar Bear beat Billy Starr & Stan Lane in a handicap match).

McGuirk did not run any shows the rest of the week, and next week he runs Tulsa with his own full crew, which includes the three wrestlers mentioned above. We'll take a look at that card in next week's update. As for the three new faces, Blair seems to have wrestled sporadically in Hawaii and Florida in 1979 but his last full-time stint anywhere was the previous year in Central States. Sugar Bear and Troy had been wrestling for the Culkins in Mississippi. That group ran what appears to be their last shows the first week of August. There was a show in Jackson on August 18th billed as a "joint" show between Watts and the Culkins, but the only Culkin talent that appeared on the card were Pork Chop Cash and King Cobra. And in the case of Pork Chop, he had just started full-time for Watts.

The biggest change to the cards for the rest of the week involved Watts. He had been making sporadic appearances between here, Georgia and Florida in August, but the first week of Mid-South saw him returning to the ring in most of the towns. In Alexandria, he teamed with Iron Mike Sharpe against King Kong Mosca & Tank Patton, in Baton Rouge he teamed with Charlie Cook against Mosca & Patton, in Chalmette and Shreveport he faced Mosca in singles bouts, and in Monroe he teamed with Mr. Wrestling II to face Ernie Ladd & Mike George. Ladd was in Georgia at the time, but was booked for this show and on one other show next week.

Jerry Oates and Buck Brannigan are not on the cards this week and thus were removed from the SPOT ratings. In the case of Oates, it may have been an injury, as he doesn't go elsewhere and over the next couple of months has a handful of bookings here. Brannigan next shows up in Georgia in late October. Mike Bowyer, who seemed to be positioned as a babyface up through last week, finds himself wrestling against babyfaces this week, so I have moved him to the heel side of the ratings chart. He was booked against Jake Roberts in Baton Rouge and Chalmette, and against Hercules Ayala in Shreveport and Loranger.

In title matches for the week, Mr. Wrestling II faced Mike George for the North American title in Tulsa and Shreveport. I believe II was the champ going in to both bouts. Results for Tulsa have George beating II while in Shreveport II won (no indication is made if they were pinfall or submission victories or DQs/countouts). Most title histories list George as winning the title from II on a TV taping in Shreveport, though some sources list the date as September 5th and some as the 8th. It's possible it was taped the 5th and started airing on the 8th.  Iron Mike Sharpe faced George in a no-DQ match in Baton Rouge for the Louisiana state title (I believe Sharpe won the title here). Sharpe and George also faced off for that title in Loranger.