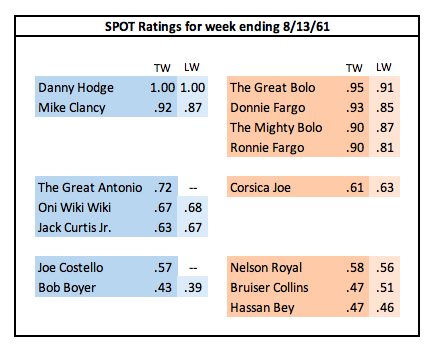 Analysis/Notes: The babyface side was bolstered with two new faces this week. Joe Costello came in for his second stint in the territory, the first having been in 1959. The most recent whereabouts I have for him before coming here were in Arizona in the first few months of the year.

The second newcomer was The Great Antonio. Antonio, real name Antonio Barichievich, was born in Yugoslavia and arrived by refugee ship in Nova Scotia in 1945. Shortly thereafter he embarked on a career as a strongman. The earliest reference I have found regarding him in a wrestling ring was in July 1958 in Ontario, where he was billed as 6'8" and 407 pounds and defeated four other men in a handicap match. He is perhaps most well-known in wrestling for a famous (well, infamous) match against Antonio Inoki in December 1977. An article, which includes an embedded video of the match, can be found at https://grantland.com/the-triangle/wrestlings-greatest-shoots-volume-3-antonio-inoki-vs-the-great-antonio/

Joe McCarthy was not booked on any of the cards I have this week, so I removed him from the SPOT ratings. He will return next week. The only significant movement in the ratings this week was the continued climb of Donnie & Ronnie Fargo up the cards. I only have two bookings for them here this week, main events in Tulsa against Danny Hodge & Mike Clancy, and the next night in Little Rock against Clancy & Al Galento. Donnie's name shows up in Tallahassee, FL for Gulf Coast later in the week teaming with "brother" Jackie, but I do not know if it was just a one-shot and if Ronnie was there as well (possibly under another name).

Other notable main events during the week were Hodge defending the World's Junior Heavyweight title in New Orleans against Great Bolo, and Hodge teaming with Great Antonio to face Great Bolo & Mighty Bolo in Oklahoma City.