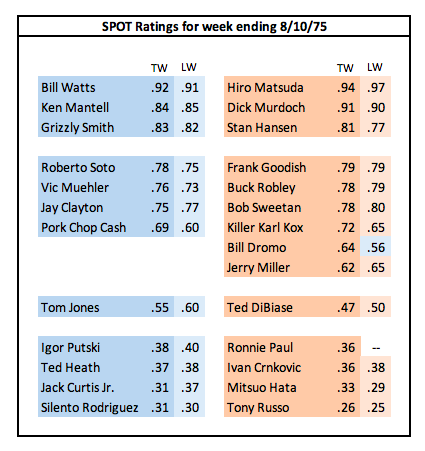 Data/Analysis: The big news this week was the heel turn of Bill Dromo. Last week he worked as a heel in Baton Rouge, but this week he's a full-fledged heel in all the towns. He was booked against Igor Putski in Monroe and Chalmette, Tom Jones in Shreveport, and Grizzly Smith in Baton Rouge for a lumberjack match.

Danny Hodge is not booked on any of the cards this week. I can't find records of him in any other territory during the week. Last week, he did injury angles in some of the towns during an "arm wrestling match" against Frank Goodish, so it's possible that was cover for a legitimate injury and he needed a week or so to heal up. Leaving the territory were Ronnie Garvin and Dick Reynolds. Garvin went to Georgia while Reynolds had a handful of appearances in the AWA over the next several months.

The only newcomer was Ronnie Paul. Paul had a couple of previous stints here with the most recent one being in 1973. He came in from Florida, but tragedy would end his stint here the following week (sorry for the cliffhanger, but I do this one week at a time; you'll have to wait until next week to find out what happened).

Pat O'Connor finished up a two-week stint this week. He faced Dick Murdoch in Tulsa and teamed with Bill Watts to face Murdoch & Killer Karl Kox in Shreveport and Chalmette. Watts and Murdoch faced off in a singles bout in Jackson. O'Connor might have been the referee there, as the newspaper ad says there would be a "special NWA referee" and O'Connor is not booked for a match on any of the cards that night. The Murdoch singles bouts were title defenses of his North American Heavyweight title. Hiro Matsuda had three defenses of his NWA World's Junior Heavyweight title, against Ken Manteel in Jackson and Monroe, and Roberto Soto in Chalmette.

Chris Taylor was advertised for appearances this week, booked in battle royals in Tulsa, Shreveport and North Little Rock, and to team with Jay Clayton in Fort Smith against Bob Sweetan & Frank Goodish. However, he did not make these appearances, as he was hospitalized the previous week after blacking out in a Davenport, Iowa dressing room prior to a show there. Newspaper reports at the time said his hospitalization was due to a deep abscess in his right calf. He returned to the ring later in the year, wrestling on a few AWA cards in October.

Rip Tyler was booked in Baton Rouge and Chalmette. He may have been injured during the Baton Rouge match, as the Chalmette newspaper says he lost his match there against Grizzly Smith "by default". He's booked on one or two shows per week for the next couple of weeks, so I don't consider him a full-timer at this time, though he will become one several weeks later. His SPOT ratings for the shows he was booked on in this time period would have been a .73.

Pork Chop Cash and Tom Jones continue to move in opposite directions on the cards. In the first week of July, Jones had a .80 SPOT rating and Pork Chop had a .44 SPOT rating. Now several weeks later Jones has a .55 and Pork Chop has a .69, so you can see there's a drastic change in the role of each. I don't have any real explanation as to why Jones was moved down the cards; he had numerous stints here dating back to 1969 when he was the first African-American male to be a regular here. He was still relatively young (35), though Pork Chop was eight years younger. Pork Chop was mostly working in the lower Louisiana and Mississippi towns, while Jones was often booked in the northern part of the territory, which seem to be the "A towns" at this time. So Jones just may have been in a logjam with the other main eventers and upper mid-carders working that end of the territory.

The other angle of note is following up on last week's loser leave town match in Shreveport where Buck Robley beat Vic Muehler. This week, Robley's opponent is listed as "Masked Rossetini". An article in the newspaper states that Rossetini looks "remarkably like ... Muehler", and in case you're still not convinced, remember that Mueller's real name was Vic Rossetani. The same angle was taking place in North Little Rock, though the name Rossetini is not used in newspaper ads, he's merely listed as "Mystery Wrestler". In both cases, I have included Rossetini/Mystery Wrestler's matches in Muehler's SPOT rating, as it's clear the intent was for fans to know that it was the same person under the mask.