- August 30, 2019
Our coverage of 1961 continues with a look at the week ending September 3rd: the Louisiana towns are shufflin', two newcomers are Scufflin', a Bruiser leaves to (maybe) become a Ripper & more! 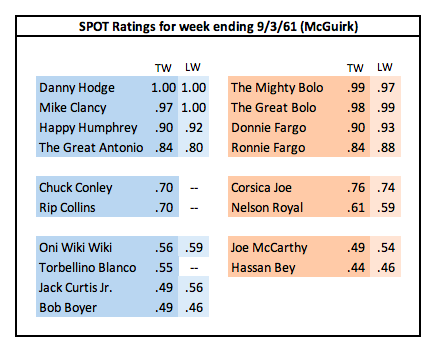 Both Monroe and Shreveport this week had stronger lineups than had been the norm. Donnie & Ronnie Fargo faced The Scufflin' Hillbillies in both towns, while Shreveport was headlined by Danny Hodge defending the NWA World's Junior Heavyweight title against Corsica Joe. Hodge also defended against Corsica in New Orleans.

The Scufflin' Hillbillies were Chuck Conley & Rip Collins. The two had been teaming up for about a year, working first for Al Haft and then for the Barnett/Doyle promotion out of Indianapolis. Debuting here this week, it was the first time in the territory not only for the team, but also for both men individually. They were a big hit wherever they went. Bill Apter has been quoted as saying they "were the greatest" after having watched them wrestle in New York when he was a teenager.

Also coming in this week was Torbellino Blanco. After spending a couple of years wrestling in Mexico, Blanco had a lengthy run in East Texas starting in mid-1960. He then spent a couple of months in Amarillo before coming here. Leaving the territory were Bruiser Collins and Joe Costello. Costello went to wrestle for Gulas. It is believed by some (including wrestlingdata dot com) that Bruiser Collins was the man who was later known as Ripper Collins. Right after Bruiser Collins leaves this territory, a Roy Collins starts in Central States. By the end of the year, he is billed in Central States as Roy "Ripper" Collins. It should be noted that wrestlingdata dot com does NOT link the records of that Roy Collins to Ripper Collins, though it does acknowledge that Ripper had worked as Roy in the AWA. Confused yet? If I had to make an educated guess, I'd say they (Bruiser/Roy/Ripper) are all the same person. If anyone has information that can help to either confirm or deny, please share if possible.

In towns not mentioned above, the main events tended to be either a battle royal featuring Happy Humphrey or Mike Clancy teaming with The Great Antonio to face The Great & Mighty Bolo. In Stillwell, yet another member of the Bolo "family", Bolo Jr., is advertised for a battle royal. The Bolo Jr. gimmick shows up occasionally over the years as a cohort of Great Bolo; I don't know who this particular version was, as it appears to be a one-off appearance on a spot show. Also making singular appearances this week are Al Galento and Red McKim. Tony Neopolitan is booked on two of the Louisiana cards.