- August 29, 2019
Our coverage of 1968 continues with a look at the week ending September 1st: Louisiana circuit wrestlers Jack Dalton (aka Don Fargo) & Kenny Mack arrested "in conjunction with alleged torture initiation by a motorcycle gang which calls itself the Pagans" & more! 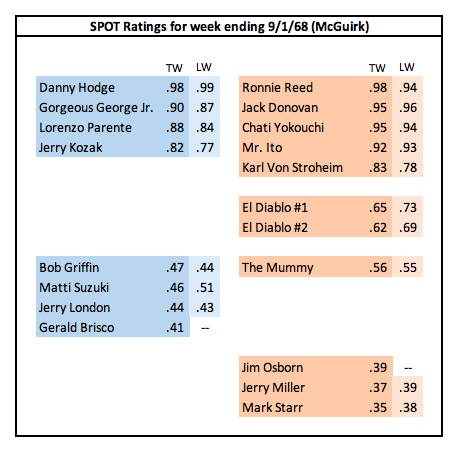 Notes/Analysis: The US Tag Team title situation was cleared up in two towns this week, as Jack Donovan & Ronnie Reed beat Gorgeous George Jr & Jerry Kozak in Tulsa and Little Rock to lay sole claim to the disputed titles. In Springfield, however, the two teams went to a draw, with each team scoring one fall before the sixty minute time limit expired.

The only other title match during the week was Danny Hodge defending the NWA World's Junior Heavyweight title against Chati Yokouchi in Monroe, with Hodge losing the first fall before coming back to win the next two falls and thus retain the title.

Sonny the Wrestling Bear (along with his trainer Nick Adams) returned here after spending last week in the lower Louisiana circuit. Sonny faced off with Karl Von Stroheim in Shreveport and Monroe and against Ronnie Reed in Longview. The ad for Longview says that this was the first time a wrestling bear appeared in east Texas, though I have no way of verifying that at this time. I don't put special attractions or part-timers in the SPOT ratings chart, but Sonny would have had a rating of .81; Adams mostly wrestled in prelims and had a .36 rating.

Haystack Muldoon left the territory and went down to lower Louisiana. Also leaving were Billy Managoff and Frank Marconi. Marconi's next known stop is in Central States starting in late October. Managoff's whereabouts after leaving here are unknown; in fact, little is known about Billy or whether he wrestled under any other names.

Returning from lower Louisiana this week was Gerald Brisco, who had spent the previous six weeks working in the lower part of the circuit. Also coming in was Jim Osborn, who had been in Southern California for the previous three months. Osborn had been here in the past, including one week earlier in the year, but his last regular stint in the territory was back in 1965. 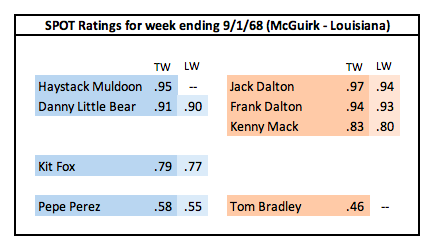 Notes/Analysis: The big news from this area happened outside of the ring, as Jack Dalton (real name Don Kalt aka Don Fargo) and Kenny Mack (real name Lawrence McMullen) were arrested in the early morning hours of Thursday, August 29th when they (along with Frank Dalton) returned home after the show in Alexandria. They were wanted in conjunction with an incident that happened late Tuesday/early Wednesday after the show in Baton Rouge. Newspaper reports state they were arrested "in conjunction with alleged torture initiation by a motorcycle gang which calls itself the Pagans". Fargo, in his book with Scott Teal entitled The Hard Way, says the pair were bonded out later that day by Bill Golden in order to make the show in Chalmette that night.

As an interesting aside, this is the first reference to Golden in conjunction with the lower Louisiana end of the McGuirk circuit. Golden, father of Jimmy Golden, popped up as a promoter in various areas in the south over the years. At some point in (I believe) early 1969, it appears that McGuirk ends his association with this sub-circuit and that Golden takes it over; though later in the year it seems McGuirk goes back in and the Louisiana towns are slowly integrated into the full territory. Golden being mentioned here shows that he was working for the group in some capacity at this time. Oni Wiki Wiki was also part of the "office" promoting towns in Louisiana

Fargo and Mack are listed on a couple of ads for the following week's cards, but their names don't appear in any results I have for those shows. In Fargo's book he says that the two left the area shortly after the incident to go work for Dick the Bruiser. On September 4th, Fargo was booked on three additional charges related to the incident, those being "simple burglary, aggravated damage property and carnal knowledge of a juvenile" per the afternoon edition of the Baton Rouge newspaper The Advocate.

The most sensational description of the (alleged) incident came in the August 30th morning edition of The Advocate. The article opens with "A barefoot walk through broken glass, a sex orgy, the discovery of dope and the arrest of two more persons..." and only gets better from there, stating the (alleged) victim says he "was almost drowned in a bathtub, nearly had one eye punched out with a broomstick, was beaten with a motorcycle chain, urinated on, had cigarette lighter fluid poured over him and then set afire". Fargo disputes the more violent aspects of the incident in his book, saying they were just roughhousing around and the worst that they did was make the victim run barefoot over some broken bottles.

No further information about all of this is available except the interesting footnote that the (alleged) victim was hospitalized again almost two weeks later after mysteriously losing control of his motorcycle. Newspaper reports list him as having been unconscious for almost two weeks straight following the accident, and that witnesses said no-one else was involved.

As mentioned above, Haystack Muldoon came down here from the main circuit while Gerald Brisco left here and went up to the main circuit. Muldoon would stay here for two weeks. This week, he teamed with Danny Little Bear & Kit Fox to take on the Daltons & Mack in Loranger, Baton Rouge, Chalmette and Lafayette, while in Alexandria he teamed with Pepe Perez against the Daltons. Also coming in to the area was Tom Bradley. Bradley competed infrequently for McGuirk over the course of the year, and was occasionally used as a referee. He came down here for two weeks to even out the roster, which had four full-time babyfaces and only three heels.