- August 21, 2019
Our coverage of 1968 continues with a look at the week ending August 25th: the tag tam titles are held up (in most towns), Hodge & Parente square off with Yokouchi & Ito in a couple of stipulation matches, Danny Little Bear teams with an actual bear & more. 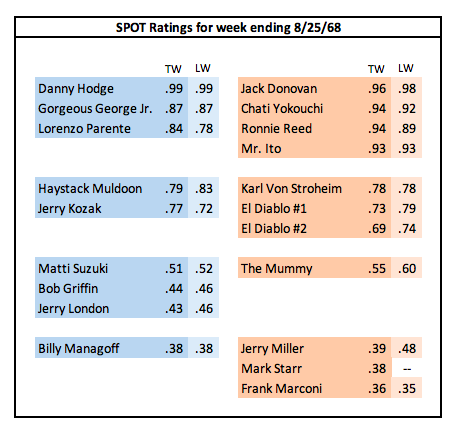 Notes/Analysis: The controversy surrounding the US Tag Team titles was mentioned in the build-up to several shows this week. If you'll recall, Gorgeous George Jr & Jerry Kozak defeated champs Jack Donovan & Ronnie Reed in an impromptu TV match. Donovan & Reed and their manager Mrs Jack Donovan protested that since an official contract wasn't signed, it was not a title match and therefore they should still be champs. In Little Rock, the two teams went to a 90-minute time limit draw, thus the titles were still in a state of flux. In Fort Smith, Donovan & Reed were still billed as champs and defended the titles against Los Diablos in a 3 out of 5 falls match. Those two teams faced off again the following night in Longview in a non-title Texas rules match; in this case, the newspaper article acknowledged the title controversy. A clever little touch to this is that it was said Mrs Jack Donovan was in "St. Louis trying to appeal" the George-Kozak decision and would not be at ringside for the match. In Oklahoma City, Donovan & Reed again went to a draw with George & Kozak.

Other title matches during the week saw Danny Hodge defend the NWA World's Junior Heavyweight title in Tulsa against Jack Donovan and in Fayetteville against Reed. Hodge also teamed with Lorenzo Parente to face Chati Yokouchi & Mr Ito twice, a steel cage match in Springfield and a Texas death match in Wichita Falls.

Sonny the Wrestling Bear and his trainer Nick Adams left here after one week and went to the "lower Louisiana" circuit. They would come back here next week. The only newcomer was Mark Starr, who came from the Louisiana circuit where he had been wrestling as The Mongol. 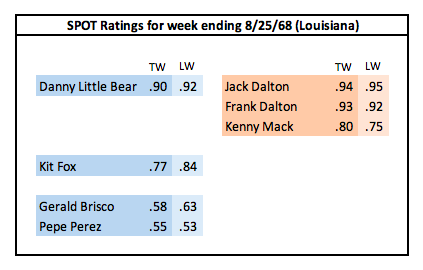 Notes/Analysis: As mentioned above, The Mongol moved up to the main McGuirk circuit and Sonny the Wrestling Bear came in along with Nick Adams. Sonny "wrestled" Kenny Mack in Loranger and Jack & Frank Dalton in Chalmette. He also teamed up with Danny Little Bear to face the Daltons in Lafayette and with Little Bear & Kit Fox to face the Daltons & Mack in Baton Rouge. Please don't ask me how they worked tag team matches with a bear. Sonny was also booked in a battle royal in Alexandria. Sonny was generally in the main event or close to it; if I included him in the chart above he'd be just above Little Bear with a .92 SPOT rating. Nick Adams was generally in the prelims and would have had a .35 rating.

As they had been doing since they started running the town, they brought in a couple of extra bodies from the main circuit for the Chalmette (just outside of New Orleans) card, with Jerry Miller & The Mummy coming in to put over Little Bear & Fox.