- August 14, 2019
Our coverage of 1968 continues with a look at the week ending August 18th: long before intergender matches were all the rage we've got an intergender/interspecies/handicap match in Oklahoma City, the tag team titles kinda sorta maybe change hands on TV & more. 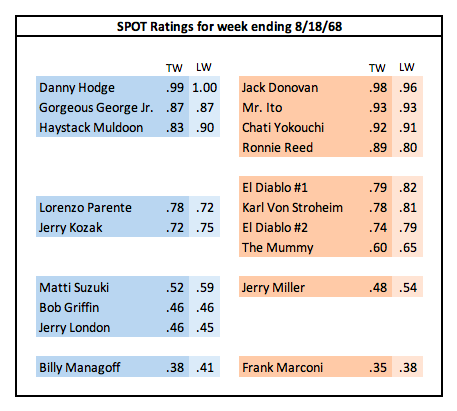 Notes/Analysis: Joe Louis finished up his two-week stint as (mostly) a special referee last week, but another special attraction joined the crew this week. Sonny the Wrestling Bear, along with trainer Nick Adams, arrived in the territory. Just this month, the Shreveport Times published an article about the history of wrestling bears in Louisiana, which can be found at https://www.shreveporttimes.com/story/news/2019/08/03/shreveport-louisiana-bear-wrestling-history/1696447001/

I generally don't include special attractions in the weekly SPOT charts, but if I did, Sonny would be just above Lorenzo Parente with a .79 rating. Nick Adams is not included because he would not be considered a "regular" member of the crew, but his SPOT rating would have been a .36, putting him at the bottom of the chart along with Billy Managoff and Frank Marconi.

Sonny was booked against Karl Von Stroheim in Tulsa, Little Rock, Springfield and Wichita Falls. In Fayetteville he went up against Ronnie Reed. And in Oklahoma City, the bear worked a handicap match against Jack Donovan & ... his wife, Mrs. Jack Donovan (who in addition to managing her husband & Reed was also a trained wrestler). So yeah, there were interspecies matches long before there were intergender matches; who's more woke now?

Known title matches during the week were Donovan & Reed defending the US Tag Team titles in Shreveport against Danny Little Bear & Kit Fox (who were actually part of the Louisiana crew but worked in Shreveport much of the time), against Gorgeous George Jr & Haystack Muldoon in Monroe, and against Los Diablos in Fort Smith and Longview. The Fort Smith bout was contested inside of a steel cage. The tag team titles were also defended in Oklahoma City, where challengers Chati Yokouchi & Mr. Ito faced champions ... Gorgeous George Jr & Jerry Kozak. Based on newspaper reports, it appears an impromptu match aired on TV where George & Kozak beat Donovan & Reed to seemingly win the titles. But Mrs Jack Donovan would later protest, saying since it hadn't been a pre-scheduled match the titles were not on the line. So as the TV tape made its' way through the territory, both teams made claims to the title. In some towns, one of the two teams would defend the titles, while in others the two teams would face each other to determine the rightful champs. 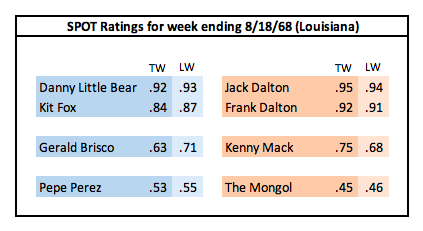 This was the third week of Monday night shows in Loranger. As mentioned above, Danny Little Bear & Kit Fox usually worked Shreveport on Mondays, so the Loranger cards often featured wrestlers not on the rest of the loop. Oni Wiki Wiki was not only on the show, but in the main event against Kenny Mack.

Chalmette featured Gorgeous George Jr & Haystack Muldoon coming in from the "main" circuit to face Frank & Jack Dalton for the Louisiana tag team titles. In a mild surprise, George & Muldoon apparently won the match and the belts. This title change may not have been recognized outside of Chalmette, as the Daltons and Little Bear & Fox are still feuding over the titles in other cities. And Little Bear is billed as the Louisiana Heavyweight champion by virtue of his victory in a battle royal last week in Lafayette. This week, he defended the title against Jack Dalton in Lafayette, and none of the other towns mention this belt, so it may have just been acknowledged in Lafayette.