For new readers, this post and this post will help you understand the SPOT rating and what it means. 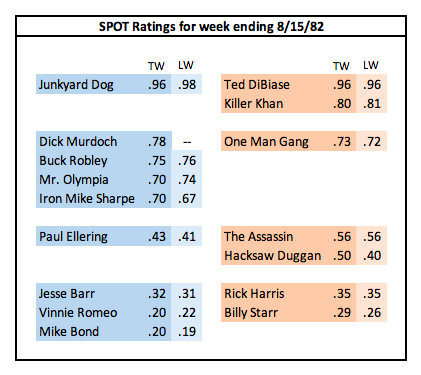 Notes/Analysis: The big news this week was the return of Dick Murdoch. "Capt. Redneck" had been in Japan since mid-June after spending much of the first half of the year here. This week, he was booked in Jackson against Hacksaw Duggan, defeated One Man Gang in Little Rock, was booked in Shreveport teaming with Buck Robley against Duggan & Ted DiBiase, and was booked in Lake Charles teaming with Iron Mike Sharpe against Gang & Killer Khan. Results from at least one online source indicate Murdoch did not appear in Lake Charles, with Mr. Olympia subbing for him.

Hacksaw Duggan continues his slow climb up the cards, while Paul Ellering seems to have cooled off. Both came in at the same time, and while Ellering's push seems to have stalled, Hacksaw is definitely being groomed for a much bigger role. He's already aligned with DiBiase, but I think they're putting the focus on DiBiase as the North American champion while Akbar's group of heels (One Man Gang, Killer Khan & The Assassin) occupy the next rungs on the ladder. When DiBiase is truly established as the top dog (or big cheese, if you will), anyone associated with him automatically becomes a "made" guy in the eyes of the fans.

In addition to the regular crew, Kerry Von Erich and King Kong Bundy worked Oklahoma City, with Kerry defeating Bundy. The Oklahoma City and Tulsa cards often featured some talent from World Class, so this was par for the course. Another member of the World Class roster at the time, Bill Irwin, was booked in Shreveport to team with One Man Gang against Sharpe & Olympia.