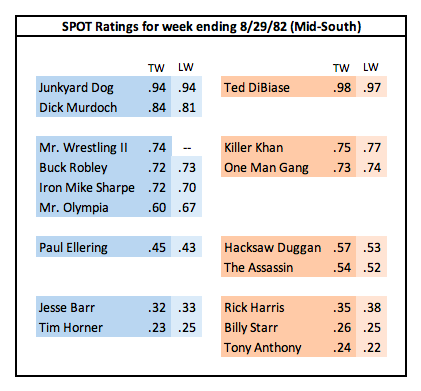 Notes/Analysis: Mr. Wrestling II came in from Georgia this week. This would be his first stint as a regular here in a few years, though he had been making occasional appearances including as recently as July. He started on the road in Baton Rouge against Killer Brooks. As mentioned last week, Brooks was in Southwest at the time but came here for a few shots. Also working Baton Rouge were Kevin Von Erich and The Magic Dragon (Kazaharu Sonoda) from World Class. Baton Rouge was headlined by a no-DQ match between Junkyard Dog and Ted DiBiase. The JYD-DiBiase match also main evented Biloxi and Shreveport.

Scandor Akbar was managing Killer Khan and One Man Gang (and maybe The Assassin) at this point in time, but found himself in the ring on a few occasions during the week. In Jackson he teamed with Gang to face Iron Mike Sharpe & Paul Ellering. In Biloxi, Sharpe teamed with Dick Murdoch & Buck Robley to face Akbar, Gang & Khan. The next night in Shreveport, the team of Akbar, Gang & Hacksaw Duggan faced Sharpe, Murdoch & Robley. Khan faced Mr. Olympia in a Mississippi State title match on that same card. Yes, the Mississippi State title was defended in Louisiana. And it changed hands too, as Khan won the match and the title. Khan had also been the Louisiana State champ, but lost the title to Iron Mike Sharpe at the previous week's TV taping in Shreveport.

Youngsters Tim Horner (who had turned 23 the previous week) and Tony Anthony (22 years old) continued to work the prelims, gaining valuable experience against different opponents. Anthony wrestled against Duggan, Olympia and Robley during the week.

Duggan continued moving up the cards in his eighth week in the territory. His first week in saw him with a SPOT rating of .23, and it has increased every single week since. He competed in his second main event this week, teaming with DiBiase in Jackson to face Robley & Murdoch.