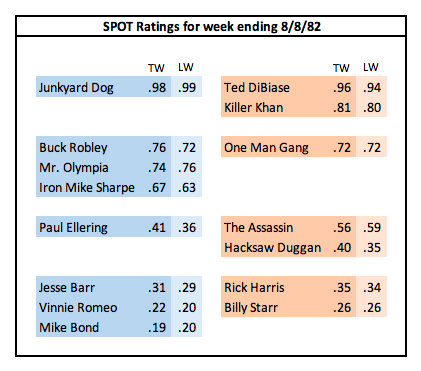 Data/Analysis: The only change in the roster this week was the departure of Steve Williams. Steve had spent most of the summer on the road and then returned to the University of Oklahoma for his senior year, where he was one of the top-rated players on the Sooner football team. NCAA rules at the time (which may or may not still apply) were that turning pro in one sport would only affect your eligibility to compete in the same sport on the collegiate level, so he was still able to play football in his senior year.

With Junkyard Dog not booked on the cards in the first part of the week (he may have been on the road in Georgia or he may have been taking a break), the top matches on those cards featured Buck Robley vs Ted DiBiase and Killer Khan defending the Louisiana Heavyweight title (against Mr Olympia twice and Paul Ellering once). JYD was back in action on Saturday, facing Ted DiBiase in Alexandria and again the next night in Baton Rouge.

In addition to the full-time crew, Killer Brooks came in for a match against Mr. Olympia in Baton Rouge. It was a one-off appearance for Brooks, who was in Southwest at the time, though he would return for a few more matches in a couple of weeks. Also making a one-off appearance were Michael Hayes & Terry Gordy, who were booked in Monroe against The Assassin & One Man Gang. Hayes & Gordy were in Georgia at the time as babyfaces, and worked the Omni in Atlanta the day before the Monroe card.