- July 10, 2019
I continue looking at the year 1968, and this week is the first time we're able to look at week-to-week changes in the SPOT ratings for this year. 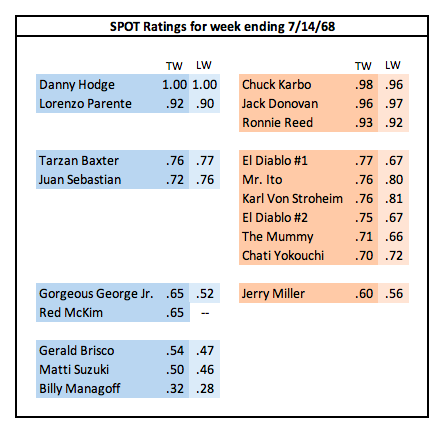 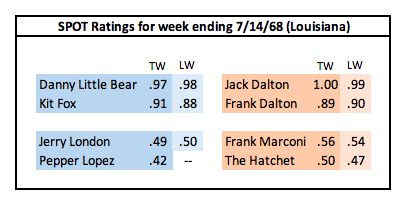 Analysis/Notes: Looking at the SPOT ratings and comparing them to last week, the biggest movers were Los Diablos and Gorgeous George Jr., all of whom moved up the cards on average this week. The territory occasionally ran heel vs heel matches on the upper portions of the cards, and this week saw Los Diablos working Karbo & Yokouchi in Fort Smith, plus Karbo taking on Von Stroheim the next night in Longview.

The only newcomer to the ratings this week is Red McKim. McKim had been in the lower Louisiana end of the territory, but came back to the main loop this week. Leaving the territory was Antonio Rocca. I don't have any info on his whereabouts after leaving. He next shows up here in May 1969.

In addition to the wrestlers listed in the chart, Tom Bradley had a couple of bookings during the week. Jessica Rogers worked against Mrs. Jack Donovan at least once. Donovan generally was working as the manager for Jack Donovan & Ronnie Reed.

In the lower Louisiana circuit, Pepper Lopez comes in, replacing Red McKim who (as mentioned above) moved to the main circuit. Lopez' name shows up on some Gulf Coast cards prior to coming here. Aside from that, there isn't much change in the structure of the cards for these towns. That's generally going to be the case going forward, as they kept a very small crew and didn't have too much turnover.