- July 04, 2019
Here is our first look at Tri-State Wresting in 1961, covering the week beginning Monday, July 3rd and ending Sunday, July 9th. If you're new to the blog, reading this post and this post will help you understand the SPOT rating and what it means. 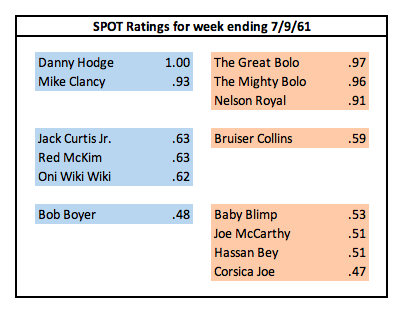 Analysis/Notes:
Promoter Leroy McGuirk, who had primarily been running shows in parts of three states (Oklahoma, Arkansas and Missouri; though they also ran towns along a tiny sliver of Texas), expanded into Louisiana around this time. New Orleans started in June, Shreveport was added at the beginning of July, and Monroe and Baton Rouge would be added the second full week of July. With all these new towns, the roster would slowly grow over a several week period. Danny Hodge was the top star, with a SPOT rating of 1.00, and was transitioning from a feud with Nelson Royal to one against the Great Bolo.

Who's who: Great Bolo was Al Lovelock, this version of Mighty Bolo is believed to be Pepper Martin, I believe Bruiser Collins was Ripper Collins, Baby Blimp was George "Two Ton" Harris.

In addition to the full-time roster members in the chart above, women wrestlers the Fabulous Moolah, Judy Grable, Rita Cortez and Vickie Page, along with female midget wrestlers Baby Cheryl and Darling Dagmar, started a two-week stint this week. Generally, Moolah teamed with Dagmar to face Page & Cheryl, with Grable meeting Cortez in singles matches, but this wasn't always the case. They were generally placed in the middle of the card, with SPOT ratings just above that of Jack Curtis Jr. and Red McKim.

Newcomers to the territory this week were Corsica Joe and Hassan Bey. Corsica Joe came here from East Texas for his first run in the territory. Bey had been here previously the year prior; his last known whereabouts were working for Gulas in late 1960.

Tiny (aka Grizzly) Smith finished up here the previous week. From here, he went to the Jim Barnett/Johnny Doyle circuit based in Indianapolis.

In future weeks when I list the SPOT ratings, I will also list the ratings for each wrestler the previous week (and maybe even the previous two weeks) so we can track any significant movement up or down the cards for certain wrestlers.