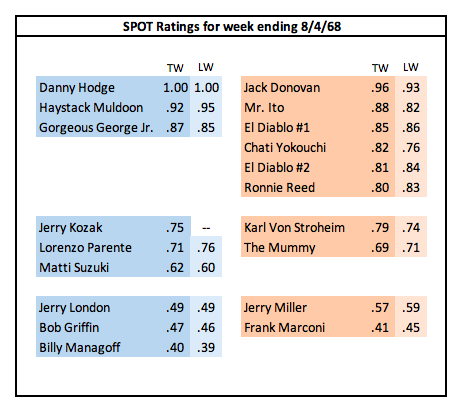 Analysis/Notes: The big news in the territory this week was the arrival of Joe Louis. Louis, former heavyweight boxing world champion, embarked on a second career as a wrestler in 1956, but was injured just a couple of months in. After that, he would be brought in to territories as a special referee. More often than not, the highlight of the night would be Louis delivering a knockout blow to whoever was the heel in the match he would referee. While I don't have reliable attendance figures for much of this time frame, the newspapers listed the attendance for three of this weeks' shows featuring Louis:
Tulsa - 4,612
Monroe - 4,700
Longview - "over 3,000"

Not only did Louis draw large attendance figures, the promotion raised ticket prices in at least two towns for Louis' appearances, so the gates were up even more than the increase in attendance. In Oklahoma City, the price for a ringside seat was raised from $2 to $2.50. Other tickets were raised by 25 cents, though children's tickets stayed at 50 cents. The ticket prices in Longview were actually doubled, with ringside going from $2 to $4, general admission going from $1.25 to $2.50 and even kids tickets went up from 50 cents to $1. In at least one interview years afterwards, Louis said he would get paid as much as $1,500 a night to referee.

Louis refereed main events involving Danny Hodge four nights out of the five he worked this week. In Tulsa and Monroe, it was Hodge vs Jack Donovan. In Longview and Oklahoma City, it was Hodge vs Karl Von Stroheim. In Fayetteville, Louis refereed Donovan & Ronnie Reed vs Los Diablos. Louis would stay here for two weeks, enabling him to work all the major towns on the loop at least once.

The Hodge vs Von Stroheim match in Longview was the finals of a tournament that had been running over the last 12 weeks, with the winner billed as getting a 1968 Pontiac Executive. Von Stroheim pinned Hodge to seemingly win the match, but continued to attack Hodge afterwards. When Louis tried to stop him, Von Stroheim took a swing at Louis, who ducked and then KO'd him. Louis then awarded the match to Hodge. One thing I have noticed in my research was that this type of "reverse decision" was used often. The heel would score the deciding fall, but then do something after the match to warrant a reversal by the referee. It was one of many tricks that promoters and bookers had in their toolbox to keep a feud going.

Aside from Louis, the other newcomer to the territory this week was Jerry Kozak. Jerry came in from Amarillo, which was his home base for the majority of his career. Here, he was generally aligned with Gorgeous George Jr and Haystack Muldoon in their battles against Chati Yokouchi & Mr Ito with manager/wrestler Von Stroheim. Six-man tags occurred this week in Tulsa and Little Rock, with tag team matches involving various combinations of those six (or Muldoon & someone else) happening in the other towns. 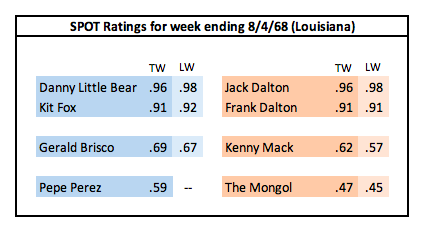 The only change to the roster this week was the departure of Pepper Lopez and the debut of Pepe Perez. Pepe had been wrestling for Gulf Coast, so he was a familiar face to fans in this area, as Gulf Coast had run the area previously before McGuirk came in earlier in the year.

The other change was in the weekly loop. They started running Chalmette (just outside of New Orleans) this week, with it being run on Thursday nights and Loranger moving to Monday nights. Because Danny Little Bear & Kit Fox were usually booked in Shreveport on Mondays (the only town on the "main" circuit that they worked), the Monday cards have a few wrestlers different from the rest of the loop. This week's Loranger card had Buddy Austin and Duke Jones, plus midget wrestlers Lord Littlebrook and Jay Cox. In addition, the Chalmette cards often featured a couple of guys from the main McGuirk circuit. This week Jack Donovan & Ronnie Reed were in to defend the US Tag Team titles against Little Bear & Fox.

A notable bout this week was another in the series between Little Bear & Kit Fox and the Daltons, this one in Lafayette with the ropes wrapped in barbed wire. I believe the ring was also surrounded by a wire fence.