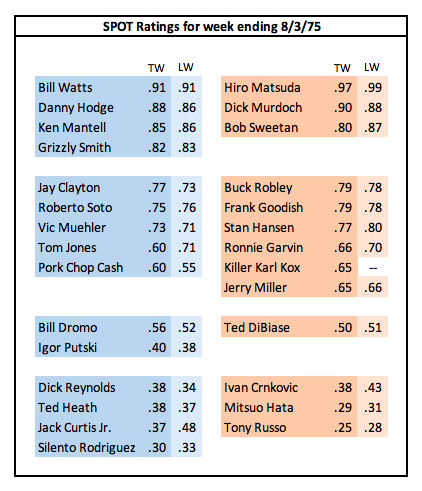 Analysis/Notes: Killer Karl Kox returned from his Japan tour, wrestling against Roberto Soto once and Danny Miller twice. Miller continues to make occasional appearances as a part-timer here while his full-time gig is in Mid-Atlantic. Miller is joined this week by two other notable part-timers, Dusty Rhodes and Pat O'Connor. Dusty comes in for the week as a heel and teams with old friend Dick Murdoch to help Dick in his feud with Bill Watts. They faced Watts & Miller in Shreveport and Jackson, and Watts & O'Connor in New Orleans. O'Connor also defeated Ronnie Garvin in Shreveport and wrestled Hiro Matsuda to a 60-minute draw in Baton Rouge.

Hiro Matsuda continued to defend the NWA World's Junior Heavyweight title against all comers, facing Ken Mantell three times during the week and Tom Jones twice. Danny Hodge & Jay Clayton were advertised to defend the US Tag Team titles against teams such as Stan Hansen & Frank Goodish, Bob Sweetan & Jerry Miller, Goodish & Sweetan, and Goodish & Buck Robley. In two of the matches where Goodish was on the opposing team, the matches were preceded by Hodge vs Goodish in an arm wrestling match. It appears that Hodge was "injured" during the arm wrestling matches, and Clayton would instead team with another babyface who wrestled earlier on the card.

Bill Dromo wrestled as a heel in Baton Rouge, teaming with Ronnie Garvin against Grizzly Smith & Ken Mantell. Dromo is still wrestling as a babyface everywhere else, but I believe by next week he's a heel everywhere.

Women wrestlers Jean Antone and Betty Niccoli spend the week in the territory. Their matches are generally in the mid-cards, as is the usual for the special attractions at the time. Bill Ash finished up his run here this week. It looks like his next stop is a month later in Memphis as one half of the masked Golden Hawks tag team.