Here's a look at the talent roster along with their SPOT ratings for the week. The crew that worked central and southern Louisiana is listed separately in the second chart. 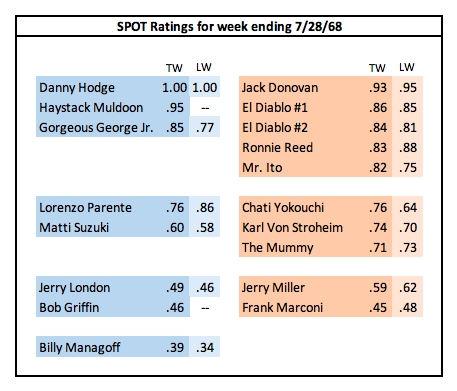 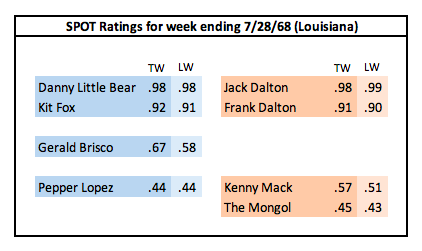 Analysis/Notes: There were two newcomers to the territory this week, Haystack Muldoon (not to be confused with Haystack Calhoun; though as you'll see below, that WAS the original intent) and Bob Griffin.

Haystack Muldoon was a Jack Pfefer creation, one of the many "sound-alike" wrestlers he had in his stable earlier in the decade. Complete records for Muldoon are sketchy; his last known whereabouts prior to this run are believed to be in the spring of 1967 when he worked as The Ozark Mountaineer for Gulas. He spent most of his first week here teaming with Gorgeous George Jr. They faced the new tag team combination of Chati Yokouchi & Mr. Ito in Tulsa, Little Rock and Oklahoma City. Yokouchi & Ito were managed by Karl Von Stroheim, who assumed a player/coach role so to speak as he still wrestled most nights.

The other newcomer is Bob Griffin. From Jacksonville, Florida, I believe Griffin was trained by Don Curtis. After spending a couple of months in Florida, he came to the McGuirk territory this week and was mostly used in a preliminary role. He's probably best known for his run as half of the masked tag team The Patriots in the mid-70s with Bobby Hart.

With Muldoon and Gorgeous George wrestling in a few main events and semi-mains, Lorenzo Parente moved slightly down the cards his SPOT rating falling from .86 to .76. On the heel side, Chati Yokouchi & Mr. Ito move up as their newly-formed tag team gets a push.

Not listed in the above chart are Oni Wiki Wiki, Red McKim and Tom Bradley, all of whom had at least one booking during the week but were not full-time.

In the lower Louisiana circuit, the only major change was that The Hatchet, who wrestled and also served as manager of Frank & Jack Dalton, was unmasked as Kenny Mack. In Baton Rouge, he put his mask up in a match with Gerald Brisco and lost. I'm not sure if he was unmasked in the other towns on the loop, but by next week he is listed as Mack on all the cards.

For the lower Louisiana circuit, the frequent teams were Danny Little Bear & Kit Fox and Frank Dalton & Jack Dalton, while the frequent matches were Little Bear & Fox vs the Daltons and Little Bear vs Jack Dalton. They ran an angle in every town with Little Bear's father, a performer known as The Indian Rubber Man (presumably a contortionist). He would do his performance early in the show, then during the main event would end up at ringside, only to be attacked by one or both of the Daltons.
1968 McGuirk