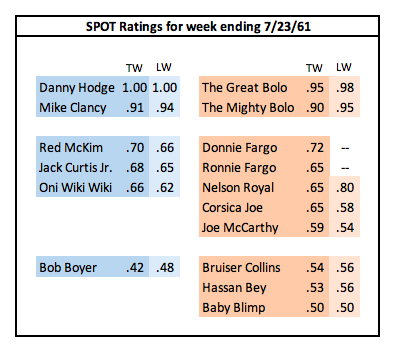 Analysis/Notes: Nelson Royal continued to be moved down the cards while Corsica Joe was moved up. Two weeks ago Royal had a .91 SPOT rating and Corsica debuted with a .47. This week they both have a .65. The introduction of The Mighty Bolo as Great Bolo's tag team partner contributed to Nelson's de-push, as Royal had been a primary opponent of Danny Hodge's but Hodge switched into a program with the Bolos, usually teaming with Mike Clancy.

The two newcomers this week are the Fargo Brothers, Donnie & Ronnie. Donnie (aka Don Fargo and about a hundred other names) had been here before, a six-month stint in 1954-55 as Don Kalt. At the beginning of 1961 he was teaming with Jackie Fargo for Gulas, but left in early February and went to Pittsburgh. There he teamed with a youngster named Jimmy Dykes, and apparently was impressed enough with him that he brought him here and christened him Ronnie Fargo. Ronnie would later be known as Jim Dalton. The Fargos were billed as being "just in from Madison Square Garden". I don't think Ronnie had wrestled in MSG, and if he did it certainly wasn't as a Fargo. Donnie had wrestled in MSG, usually as Don Stevens but at least once as Don Fargo. Nevertheless, they received a big push upon their arrival.

Hodge defended the NWA World's Junior Heavyweight title against Corsica Joe in Wichita Falls and Mighty Bolo in both Tulsa and OKC.

I have a couple of attendance figures this week from newspaper reports. Shreveport drew "approximately 600" fans, while Paris drew "an estimated 300". The newspaper in Paris said another card was scheduled for the following Friday, but there are no further details and it's possible the low attendance spooked them and the follow-up didn't happen.

Some of the more frequent matches at this time include:
Danny Hodge & Mike Clancy vs Great Bolo & Mighty Bolo
Great Bolo vs Mike Clancy
Donnie Fargo vs Red McKim
1961 McGuirk