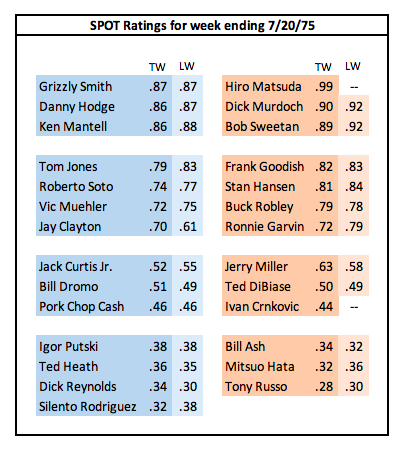 Analysis/Notes: The two biggest changes in SPOT ratings this week were Jay Clayton and Ronnie Garvin. Clayton received a little bit of a push as tag team partner of Danny Hodge and moved into higher profile matches, including a shot at Hiro Matsuda's NWA World Junior Heavyweight title in North Little Rock. Garvin continued to be moved down the cards.

Bill Watts is not listed in this week's ratings. At this point in time he is bouncing back-and-forth between here and Georgia a lot. Since he didn't have any known bookings in this territory during the week, I didn't include him, even though he was here the previous week and the following week. That's the same reason Hiro Matsuda wasn't listed last week, as he went to Stampede for a week to defend the Junior Heavyweight title. He returned here this week and thus is back in the ratings.

The only full-time newcomer this week was Ivan Crnkovic. Crnkovic was billed as being from Croatia, but I am not sure if he was born there or is legitimately of Croatian descent. He had been wrestling for less than a year when he came here, and had spent some time in Stampede and occasional appearances for the AWA, particularly when they ran in Manitoba.

Chris Taylor was brought in for the week. The 1972 Olympic bronze medalist in freestyle wrestling had been trained by Verne Gagne and was booked as a special attraction, spending a week or two in a territory at a time, dating back to March 1974. His SPOT rating for the week was a .85, so he would be in the main eventer category listed just below Hodge and Ken Mantell. The Spoiler had one booking here for the week, in Jackson against Dick Murdoch.

Some of the more frequent matches at this time include:
Hiro Matsuda vs Ken Mantell
Bob Sweetan vs Tom Jones
Danny Hodge vs Hiro Matsuda
Bill Dromo vs Ted DiBiase
Ken Mantell vs Ronnie Garvin
1975 McGuirk