- July 03, 2019
Here is our first look at Tri-State Wresting in 1968, covering the week beginning Monday, July 1st and ending Sunday, July 7th. If you're new to the blog, reading this post and this post will help you understand the SPOT rating and what it means.

In early 1968, Leroy McGuirk expanded into central and southern Louisiana for the first time in several years. He had been running Shreveport and Monroe, but both of those towns were in the northern part of the state and closer to the rest of the territory. The remainder of Louisiana operated with its' own crew. Well, kind of. It was a small crew, generally between 6-10 wrestlers per show. Some of the wrestlers would only wrestle in the lower Louisiana towns, and some wrestlers would come from the "main" end of the territory and stay for a couple of weeks. The crew was generally a step down from the crew that worked the main end of the territory, so it wouldn't be right to compare SPOT ratings from what are essentially two different circuits (a comparison to the current Raw/Smackdown brand split isn't entirely out of place). So for now, we will treat them as two separate entities. 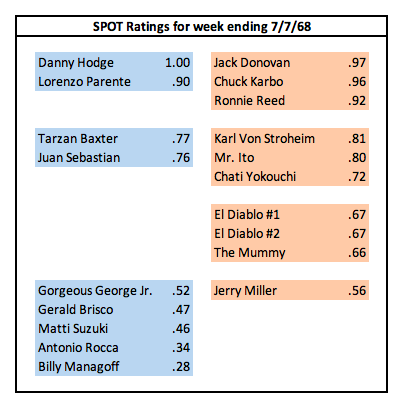 Lower Louisiana:
Tuesday - Baton Rouge
Wednesday - Alexandria
Thursday - Loranger (they ran two shows on this day; one in the afternoon and one in the evening, due to it being the 4th of July)
Friday - Lafayette

Analysis/Notes:
Tag teams were featured prominently in the territory during this time. Frequent teams are listed below, but no less than 7 teams would be considered "regular" teams, and that's with a total crew of just 19 wrestlers on the main circuit.

Danny Hodge has a perfect SPOT rating of 1.00. As a reminder, that means that for this week, the two weeks prior and the two weeks after, he was in the main event of every card he was booked on. It's far from the only time we'll see a perfect score from him; in fact, he had a perfect 1.00 exactly seven years prior, which you can see in our coverage of 1961.

Who's who: Ronnie Reed was better known as Buddy Colt, Tarzan (aka Leon) Baxter also wrestled as The Wrestling Pro, the identities of El Diablo #1 & El Diablo #2 are not known (although Treach Phillips may have been #2 at some point in their run here), the Mummy was Benny Ramirez, Antonio Rocca was Tony Rocco. In the lower Louisiana circuit, Jack Dalton was Don Fargo and the Hatchet was Kenny Mack.

In future weeks when I list the SPOT ratings, I will also list the ratings for each wrestler the previous week (and maybe even the previous two weeks) so we can track any significant movement up or down the cards for certain wrestlers.
1968 McGuirk