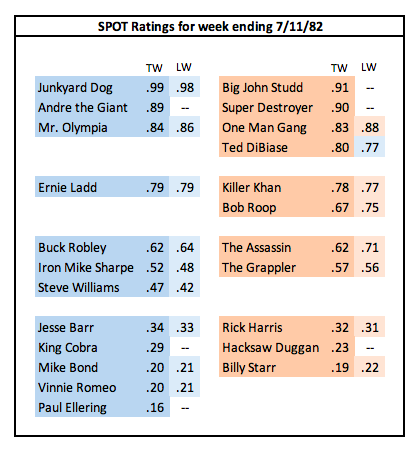 Analysis/Notes: This is the first week where DiBiase is definitely working as a heel on some of the house shows. He still works against Bob Roop in Loranger and Greenwood, so the turn likely still hasn't aired in every market. You'll notice in the chart above that DiBiase's Last Week SPOT rating is shaded in blue to reflect that he was a babyface last week.

New to the SPOT ratings this week are Andre the Giant, Big John Studd & Super Destroyer (Scott Irwin), King Cobra, Hacksaw Duggan and Paul Ellering. Starting with the Saturday show in Jackson, the cards are billed as "Summer Spectaculars" with a loaded lineup. In addition to the wrestlers listed above, female wrestlers Judy Martin and Vivian St. John are in the territory as well, mostly working singles bouts against one another in the mid-card (their SPOT rating is a .40).

You can get a good idea of how important Junkyard Dog was as a draw by seeing him with a higher SPOT rating than Andre the Giant. JYD was in the main events most of the time, with Andre being second from the top more often than not. Studd & Destroyer were basically "on loan" from Georgia for a brief run here, billed as the International Tag Team champions and often in title vs title matches against JYD & Mr. Olympia. While Super D returned to Georgia after the stint, Studd goes to Florida.

Looking at Ellering and Duggan, you can start to see how newcomers who were going to be pushed would get their start in the territory at this time. Both are clearly being groomed for a higher position on the cards, but in their first week on the road they are put in preliminary matches, getting wins over some of the regular prelim guys. As we move forward, we can watch their SPOT rating change from week-to-week and get a feel for how quickly guys are moved up the cards.

On the babyface side, both Iron Mike Sharpe and Steve Williams had increases in their SPOT rating. In the case of Sharpe, he found himself facing DiBiase in many towns for DiBiase's first match as a heel; one can assume it's to build DiBiase up for matches against JYD the next time in each town. In the case of Williams, it's more an indication of his being slowly moved up the cards.

On the heel side, The Assassin and Bob Roop have significant decreases in their ratings, with One Man Gang also moving down a good bit. Looking at the cards, both the Assassin and Roop are being moved down the cards, while OMG's decrease is mostly due to newcomers Studd & Destroyer taking a lot of the main events, as well as DiBiase's turn leading to him having a slightly higher rating.