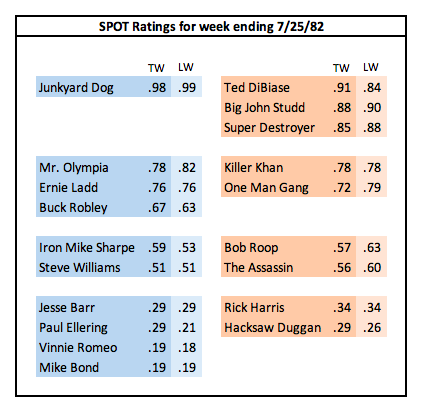 Analysis/Notes: Ted DiBiase assumes the role of "lead heel" this week, with his SPOT rating increasing from .84 to .91. Many of the other heels see small decreases in their ratings as DiBiase moves up. On the babyface side, Andre the Giant finished his brief run here the previous week; as such, some of the other babyfaces see increases in their SPOT ratings as they move up the card to take Andre's place.

In addition to Andre, Billy Starr and King Cobra are absent from this week's ratings. Cobra had a very short run here. He came in from Memphis, and returned there after just a couple of weeks. Starr is not booked on any cards this week, but he returns the following week.

Women wrestlers Judy Martin and Vivian St. John finished up their run here this week. Vicki Williams may have substituted for St. John on at least one card.

Also making appearances were Mr. Wrestling II, the Masked Superstar and Leroy Brown. II and Superstar were in from Georgia for the weekend and faced each other in Jackson and Alexandria. Leroy Brown had just started in Mid-Atlantic (coming from Georgia) but worked some shots here, including in Alexandria against Killer Khan.

DiBiase and Junkyard Dog both worked twice in Monroe. DiBiase faced Iron Mike Sharpe and JYD teamed with Mr. Olympia against Big John Studd & Super Destroyer, then they faced each other in a Lights Out match in the final match on the card.