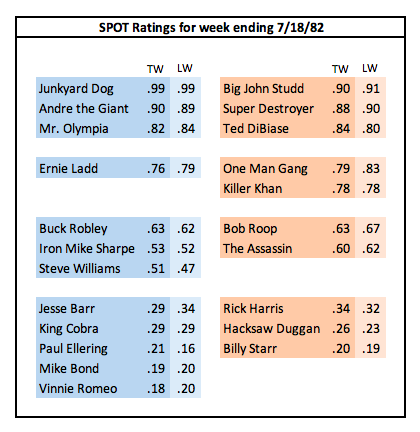 Analysis/Notes: Not much changed this week, as the promotion continued their run of Summer Spectacular cards leading up to a show at the Superdome in New Orleans on July 17th. Junkyard Dog worked twice on that show, first against Ted DiBiase and then teamed with Mr. Olympia to face Big John Studd & Super Destroyer. The other major match on the card was Andre the Giant vs Killer Khan.

In addition to the wrestlers listed above, female wrestlers Judy Martin and Vivian St. John are in the territory.

No newcomers this week, but The Grappler finished up the previous week and went to New Japan. He would return here in September.

Paul Ellering and Hacksaw Duggan continued to work prelims, with small increases in their SPOT ratings but nothing significant. With the promotion running most towns once every 2-3 weeks, it will take at least that long to see them move up the cards.