- July 01, 2019
Here is our first look at Mid-South Wresting in 1982, covering the week beginning Monday, June 28th and ending Sunday, July 4th. If you're new to the blog, reading this post and this post will help you understand the SPOT rating and what it means. 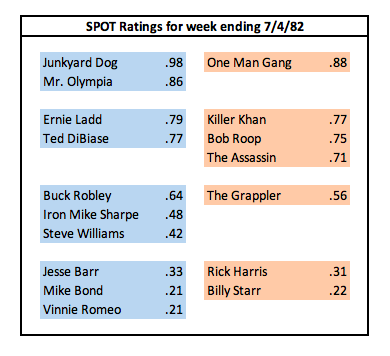 It's well documented that JYD was a big draw, and here you can see his SPOT rating was near-perfect (a SPOT of 1.00 would mean he was in the main event on EVERY card over a five-week period covering this week, two weeks before and two weeks after).

Ted DiBiase turned heel on the June 23rd TV tapings in Shreveport. The show aired in some markets a few days later, but many fans didn't see the turn until the weekend of July 3rd-4th (and other markets may have seen it a week after that). DiBiase is wrestling against Bob Roop on most of the house shows during this week, so I've kept him on the babyface side for now.

I'm not 100% sure Mike Bond should be on the babyface side. With most of the preliminary wrestlers, you can look at their opponents and easily figure out which "side" they're on. But Bond wrestled against babyfaces and heels almost equally. I'll keep on him on the babyface side unless I receive enough evidence to "overturn" that ruling.

General Scandor Akbar was managing Gang, Khan and the Assassin (and possibly the Grappler)

Newcomers this week were Buck Robley and Vinnie Romeo. Robley hadn't been here regularly since the previous September. He had a couple of tours in Japan plus a stint in Southwest during his time away. Romeo had been here previously, also leaving in September of 1981. He was in Mid-Atlantic for most of his time away, but also spent a month in Florida right before coming back here.

In future weeks when I list the SPOT ratings, I will also list the ratings for each wrestler the previous week (and maybe even the previous two weeks) so we can track any significant movement up or down the cards for certain wrestlers.