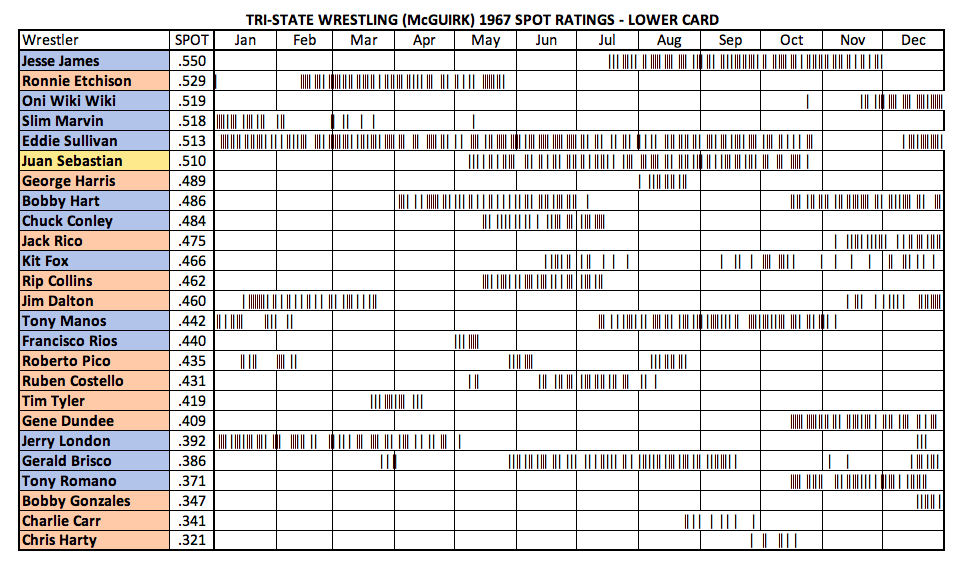 Jesse James - James started wrestling as a teenager in 1933 or 1934 and had numerous stints here dating back to 1938. He hadn't been here in over 5 years when he returned in July. James came here from Mid-Atlantic, and returned there in early December after a four and a half month run here. The would be his last stint in the McGuirk territory, and his career as a full-time wrestler looks to have ended in early 1974.

Ronnie Etchison - Etchison had made a handful of appearances here in 1943, but this might have been his first stint as a regular. He came here from East Texas in mid-February, and after staying a few months he returned to his home base of Central States. He would return here in 1970.

Oni Wiki Wiki - His name translates to "Super Fast Fast", which gives you an idea of his style in the ring. Wiki Wiki had numerous stints here dating back to 1959. He was also McGuirk's "front man" in Shreveport dating back to the early 60s, and may have helped run some of the other Louisiana towns as McGuirk expanded south in 1968 and 1969. Before coming here in the fall, the most recent listings I could find for him were in Gulfport Mississippi; I'm not sure if those were Gulf Coast shows or an outlaw promotion.

Slim Marvin - "The Scufflin' Hillbilly" Slim Marvin was an undersized wrestler. He often teamed with Billy Garrett as an offshoot of the original Scufflin' Hillbillies tag team, which consisted of Chuck Conley and Rip Collins. Originally the Garrett & Marvin version were advertised for shows in the territory at the tail end of 1966, but for whatever reason Marvin ended up wrestling as a solo while Garrett teamed up with Dick Dunn as the Red Raiders. Marvin may have injured his leg during a match in Longview, TX in January. After making a handful of appearances in the spring, I'm unsure of his whereabouts until the summer of 1968 when he works for Gulas. Wrestlingdata.com says he returned here in 1970 in a different role, manager Beauregard Van Buren.

Juan Sebastian - Sebastian came here in May from Mid-Atlantic, where he had been wrestling as El Gaucho. This was his first stint in the territory. Looking at his opponents, it appears he was positioned as a babyface at first but after a few weeks he switched over to wrestling as a heel.  He stayed through mid-October and then went to Georgia. He would return here in 1968.

Bobby Hart - The son of Frankie Hart, Bobby came here in April from Georgia. He left in July to wrestle for Northland Wrestling Enterprises in Ontario and returned here in October. He was given a significant push in Longview, TX, teaming with Danny Hodge once and wrestling against him once, plus winning a tournament in November for the newly created East Texas State title.

Chuck Conley - Conley was here in the very beginning of the year as one half of the Medics. After dropping mask vs mask matches around the horn to the Assassins, Conley went to wrestle for Gulas, where he re-formed the Scufflin' Hillbillies with Rip Collins. Both Conley and Collins came here in May, but not as a team. Conley wrestled as a babyface for a couple of months, while Collins wrestled as a heel. Both returned to Gulas in August where they again worked as a team.

Rip Collins - As mentioned above, Collins came here for two months as a heel from May to July. Both before and after this run, he had been teaming with Chuck Conley as the Scufflin' Hillbillies for Gulas. He had been here previously and had teamed with Conley; I'm unsure if there was a storyline explanation for him being a heel during this run. This was Collins' last stint in the territory. Conley returned briefly in 1972, teaming with Vic Nichols as yet another version of the Scufflin' Hillbillies.

Kit Fox - Enough about hillbillies, let's move on to another time-honored wrestling stereotype. "Indian chief" Kit Fox had numerous stints here dating back to 1952. After October 1965, his name doesn't seem to show up anywhere for several months. He was involved in an auto accident in Oklahoma City in July 1966, filing a $154,000 lawsuit against the other driver the following month (results of that suit are unknown). He returned to action in June of 1967, wrestling here for a little over a month and then going to Arizona. He would return here in the fall, wrestling as a semi-regular. In 1968 he would be a big part of McGuirk's expansion into central and southern Louisiana.

Gerald Brisco - A 20-year old Brisco would make his pro debut on March 25th in Joplin, teaming with older brother Jack against Krusher Karlssen & Scandor Akbar. He wrestled the following week in Little Rock, Oklahoma City, and again in Joplin. After that, his next bookings wouldn't occur until late May, at which point he was a regular through mid-September. This lines up with the typical college summer break, as he was a student at Oklahoma State University at the time. He did have a couple of bookings in the fall, and then worked regularly in December over the holidays.
1967 McGuirk