By the end of 1977, Ron Fuller's Southeastern territory based out of Knoxville was firmly established. Ron took control of it in 1975, and they were running towns in eastern Tennessee and parts of Kentucky and Virginia. In early 1978, Fuller purchased Gulf Coast Championship Wrestling; the following article appeared in the January 8th edition of the Mobile (AL) Register. 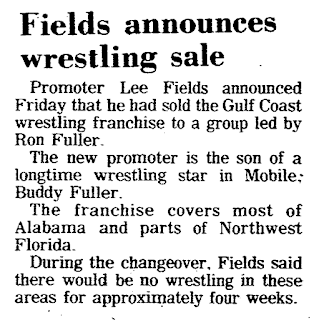 Newspaper ads that I have from Panama City, Mobile, Montgomery and Pensacola refer to the new promotion as Southeastern Wrestling (or NWA Southeastern Wrestling) from the get-go. However, the promotion still used Gulf Coast Championship Wrestling signage on their TV program. My good friend Beau James (http://www.kingofkingsport.com) told me he has seen some ads that still called it "Gulf Coast", and he might have even seen a "Southeastern Gulf Coast" somewhere. According to the very reliable Karl Stern at whenitwascool.com , the renaming of the promotion to Southeastern didn't occur until 1980 when Fuller started running Birmingham and other northern Alabama towns that had been run by Nick Gulas. And even when it was called Southeastern, it had a different crew than the Knoxville territory of the same name run by the same promoter. So there's a tiny bit of confusion as to what we should actually call the promotion at this point in time.

To keep things simple, we will just refer to the territory as Southeastern (Mobile/Pensacola). The first weekly cards in the new territory after Fuller took over look to be in March in Panama City, FL (though they ran Dothan at least once during the month). The other towns didn't start back up until April, so when we start looking at SPOT ratings in next week's column, they will be for the second quarter of the year, from April through June.

I have complete data for three weekly towns: Mobile AL (Wednesdays), Panama City FL (Thursdays) and Pensacola FL (mostly Sundays but occasionally on Tuesday). In addition, I have a few cards from Montgomery AL run on Mondays. There are a handful of results online from Dothan AL, which was run on Fridays. 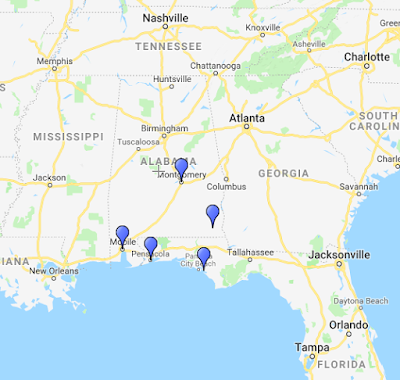 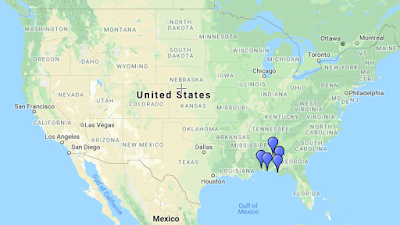 Here is a look at the roster as Fuller starts running in the new region. The following wrestlers competed on at least one of the Panama City cards in March and stayed on as the territory started running the rest of the circuit in April.

Bob Armstrong - Bob had been working in Georgia prior to coming here, though it appears he did a few shots for the Knoxville version of Southeastern in January under a mask as The Georgia Jawjacker.

Burrhead Jones - Burrhead left Central States in November of 1977 and came to Gulf Coast, staying through the sale from Fields to Fuller.

Charlie Cook - Cook left Georgia in February and worked some of the March cards here. He may have also worked a handful of cards for Championship Wrestling from Florida in March.

Mike Stallings - Stallings worked a couple of shots in Memphis in December. Prior to that, he had been in Central States, leaving in July 1977.

Reuben Gibson - The younger brother of Ricky Gibson used a few different names at the beginning of his career. While he eventually settled on Robert Gibson, he wrestled here as Reuben Gibson. Prior to coming to this territory, he had been wrestling in Memphis.

The Assassins - Per wrestlingdata.com, this version of the Assassins was Randy Colley & Roger Smith. Randy was previously in East Texas through September 1977, while Roger was in Georgia through October. The team was managed here by Rip Tyler. Random trivia: Colley had billed himself as "The Real Rip Tyler" in Gulf Coast back in 1976 for an angle which led to Rip Tyler (the actually, really real version) returning to the area.

David Schultz - Schultz finished up a three month stay in Memphis in January before coming here.

Eddie Mansfield - Mansfield was wrestling in Southern California in the fall of 1977. It appears he worked some shows for Gulf Coast in the winter before the sale.

Ron Fuller - Because running one territory and working behind the scenes to start running another one just wasn't enough for Ron, he was also wrestling during this time. He was under a mask as the Tennessee Stud in Knoxville as well as working for Sam Muchnick in St. Louis.

Next week we'll look at the territory in the second quarter of 1978, looking at the movement of talent in and out, the big feuds, and our exclusive SPOT ratings. But we'll end this column with a little tease of something else...
As Fuller started running these new (for him) towns, he surely had a lot of things on his mind. Spending the night in jail after a show probably wasn't one of them. It should have been.
1978 Southeastern