In the fourth quarter of 1978, the top wrestlers in the Mobile/Pensacola division of Southeastern included Ron & Robert Fuller, the Mongolian Stomper, Don Carson and Bob Armstrong.


The below chart lists the wrestlers who were regulars in the territory between October 1st and December 31st, 1978. They are ranked by their Statistical Position Over Time, a number between .000 and 1.000 representing the average spot on the cards they were booked on (a 1.000 would mean they were always in the main event). 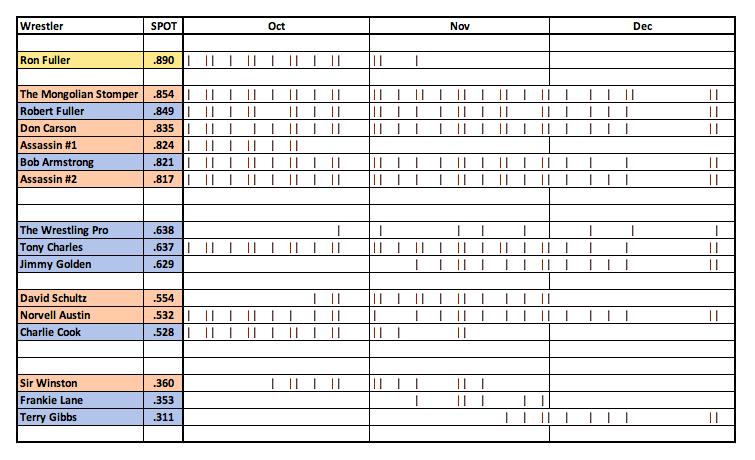 Other newcomers to the territory were Frankie Lane, Jimmy Golden, Sir Winston and Terry Gibbs.

Lane came in for a few weeks in November. He had been in Memphis prior to coming here, and went to Georgia when he left.

Golden came in from Knoxville in November. He had been teaming with Rip (Ervin) Smith there, feuding with Dennis Condrey & Phil Hickerson (who were managed by Ron Wright). On November 10th in Knoxville, Golden & Smith lost a "losers will not wrestle in the area as a team for one year" match.

Sir Winston came in for about a month from Florida. After spending his first few years bouncing around territories like so many other wrestlers, Winston settled in Florida in 1976 and wrestled there sporadically for the next few years. 1978 seems to have been the end of his career as an active wrestler.

Gibbs came here in late November from Knoxville. Debuting in Georgia in the first half of 1977, Gibbs worked various territories for several years before becoming primarily enhancement talent for the WWF in 1984.

Ricky & Reuben Gibson left the territory in early October. Reuben went to Memphis (where he used the Robert Gibson name). I don't have anything on Ricky until he makes a couple of appearances here in late December and January, then shows up for a few weeks in Southern California in June of 1979 before working for Gulas.

Also leaving the territory during the quarter was one of the Assassins (Roger Smith), Charlie Cook, David Schultz and Ron Fuller.

Aside from Gorgeous George, Jr., the other manager in the territory was Billy Spears. Spears continued to manage the Assassins, and then managed Assassin #2 & Don Carson when Roger Smith left.

The Wrestling Pro continued to appear here on a part-time basis. Other wrestlers booked for appearances during the quarter here included Ken Dillinger, Rick Connors, Roy Lee Welch, Ted Allen, Buddy Fuller and Andre the Giant. Buddy, father of Ron & Robert, was booked to team with Robert on October 22nd in Pensacola against Assassin #2 & Norvell Austin.

Andre was advertised for November 16th in Panama City, teaming with Robert Fuller to face Don Carson, Assassin #2 & Norvell Austin. Prior to this appearance, his last known booking was November 9th in Kansas City. He does a week for the WWWF starting on November 17th and then goes to Mid-Atlantic.

Armstrong-Stomper occurred four times in Panama City and three times in Mobile. In Panama City, they wrestled each other three weeks in a row, with the third match being a non-title 10-round boxing match. Five weeks later they met again in a Texas death match. That same stipulation also occurred the previous night in Mobile.

Next week on Charting the Territories we are going to start taking an in-depth look at Leroy McGuirk's territory, commonly referred to as Tri-State Wrestling.

We will be starting with the SPOT ratings for 1966, and from there go a lot more in-depth, using data & statistics to answer a number of questions about the territory.

I will look at the data I have and attempt to answer the question "how complete is this information"? Can we pinpoint exactly how many shows we're missing; can we prove that we're missing weekly stop(s) on the loop; and to take it a step further, can we use the info we have to "guess" the missing cards? If we know we're missing weekly towns, can we guess which towns they might be?

Can we use statistics & data to rank the different towns based on the strength of the lineup? Can we also look at the # of wrestlers per card per town to get an idea of its' importance in the grand scheme of things? Did these change over time; did towns become more or less important over the years?

Is there a sweet spot of calculating wrestler SPOTs over a shorter period of time that best captures their movement up and down the cards while still having a large enough sample size?

Can we come up with a way of assigning a numerical value to frequently occurring matches to determine the biggest feuds?

Can we look at wrestlers and feuds as they travel from town to town and find a pattern? Are feuds more likely to start in certain towns and gradually work their way to others? With such a large territory, do wrestlers spend periods of time concentrated just in one part of it for weeks at a time before moving to others?

Can we improve the title history/lineages that are out there? How accurate are they? Did different towns have their own lineages of the same title?

Can we definitively answer the question of who wrestled under various masked gimmicks at different periods of time? Or for wrestlers that very little info is known about, can we obtain more info using data?

In case this blog wasn't nerdy enough, clearly you can see it's about to get a whole lot nerdier.
1978 Southeastern