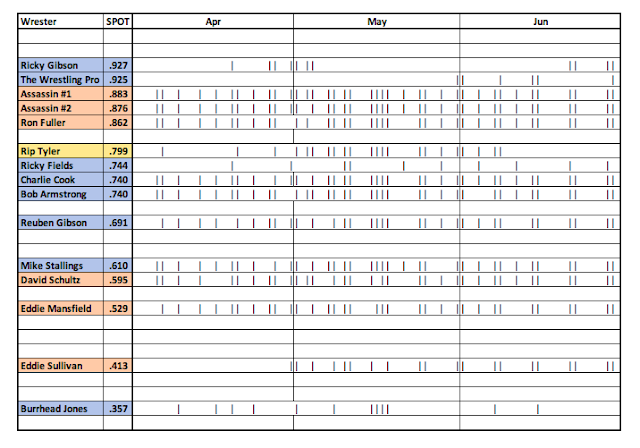 Babyfaces are highlighted in blue, heels in orange (Rip Tyler turned from heel to babyface during the quarter). The spacing between wrestlers is meant to approximate the differences in their SPOT. The vertical lines to the right of their SPOT indicate the days they were advertised/booked on a card.

As touched on above, Rip Tyler had quite the rollercoaster quarter. At the beginning of April, he was managing heel team the Assassins (Randy Colley & Roger Smith). He turned babyface in mid-April and was used as a wrestler from that point on. That run didn't last long, as he left the promotion in early June.

Replacing Tyler as manager of the Assassins was Billy Spears, who had been in East Texas.

Eddie Sullivan came in as a regular at the end of April. He had most recently been wrestling for the Culkins' ICW promotion in Mississippi.

Ricky Gibson came in for a couple of weeks in April, mostly to team with his brother Reuben (aka Robert Gibson). The brief stint appears to have ended with a storyline suspension and he returned to Fuller's Knoxville territory. He would come back in late June as a regular.

Ricky Fields and the Wrestling Pro were not booked regularly, but they were generally booked in specific towns. Using the towns I have data for, Fields was booked in Pensacola and Mobile while the Pro (who most likely was Leon aka Tarzan Baxter) was booked in Panama City.

Burrhead Jones was booked on cards less frequently than most of the other wrestlers in the territory, and after a couple of appearances in June he went to Mid-America (Gulas).

Other wrestlers with bookings during the time period included Greg Peterson, Ken Lucas, Rocket Monroe, Terry Latham, Mike Jackson and Jack Brisco. Brisco was booked in Mobile on April 5th as part of a tournament to crown the inaugural Southeastern Heavyweight champion. While Ron Fuller won the tournament, another interesting piece of news involving Fuller happened that night. 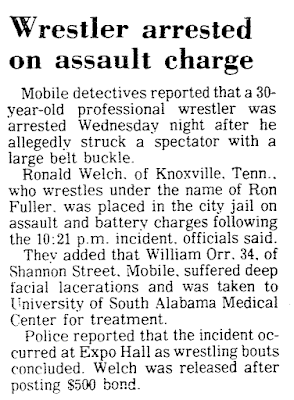 Looking at some of the part-timers, a closer look at the lineups shows a pattern. Ricky Fields, the Wrestling Pro, Ken Lucas and Rocket Monroe had all been mainstays of the Gulf Coast territory. When Fuller won the Heavyweight title, the first couple of months were spent defending it against those wrestlers more often than not. Clearly, it was to help establish Fuller as a top guy, and bringing in some of the stars of the previous iteration of the territory would help draw fans to the new promotion in town. It's also clear that they were building Bob Armstrong up as the top challenger for the title and a concerted effort was made to keep he and Fuller apart. Their first match here took place in early June in Mobile, where Armstrong won the title from Fuller. They were rematched for the next three weeks (in Mobile only), with the third match being a Texas Death match and the fourth match having two referees. Fuller regained the title at some point in all of this.

Even as the top singles champion, Fuller generally didn't put himself into the main event on every card. The Assassins were in the main event spot more often than Fuller. They were billed as Southeastern tag team champions, and would face various combinations of the main babyfaces on the roster; primarily Charlie Cook and Reuben Gibson, but also Bob Armstrong, Ricky Gibson and Mike Stallings.

As the summer months kick in, Fuller's territory is up and running a full schedule. Several new faces will come in over the next few months, many of whom have ties to the area or to Fuller's Knoxville territory. Next week we'll update the blog with a look at the third quarter of 1978.
1978 Southeastern