In the fourth quarter of 1978, the top wrestlers in the Pacific Northwest included Roddy Piper, Dutch Savage, Jonathan Boyd and Bad News (aka Killer) Brooks.

The below chart lists the wrestlers who were regulars in the territory between October 1st and December 31st, 1978. They are ranked by their Statistical Position Over Time, a number between .000 and 1.000 representing their average spot on the cards they were booked on (a 1.000 would mean they were always in the main event). 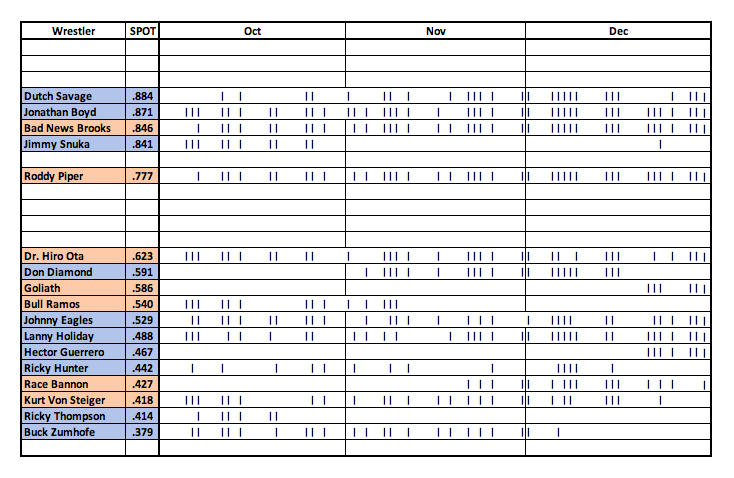 Bad News Brooks - Usually (but not always) billed in newspaper ads here as Bad News Brooks, "Killer" Tim Brooks started in early October, coming from East Texas. This was his first and only stint as a regular here, though he worked at least once in 1977, taking a handful of dates here and in Vancouver in between stints in Stampede and Southern California.

Race Bannon - Bannon had a pretty short career between 1977 and 1979. He came here in mid-November from Vancouver. He likely took his ring name from the character in the Johnny Quest cartoon.

Roddy Piper - Piper's legendary run in this territory began on October 7th in Portland with a victory over Johnny Eagles. He came here from Southern California, where he had been for most of the previous two and a half years. Some of his first matches here were against a man he would later feud with in the WWF, Jimmy Snuka. They faced each other three times here (that I have records for), all in Salem OR.

Ricky Hunter, Hector Guerrero, Goliath (of Black Gordman & Goliath fame) and Ricky Thompson were not full-time here but were booked enough to be include in the SPOT rankings. Guerrero & Goliath both came in from Southern California for two weeks around the holidays. Thompson is the father of Robert Thompson, who was a mainstay years later for Roland Alexander's All Pro Wrestling.

While he didn't wrestle regularly here during the time period, I do want to make note of Matt Borne's appearances in the territory. His pro debut occurred on December 6th in Portland, teaming with father Tony Borne to beat Kurt Von Steiger & Race Bannon. He wrestled on a few other cards for the first month of his career, but only in Portland. By mid-January of 1979, he was on the road as a regular.

Buck Zumhofe - Buck left in early December. His name shows up next in Hawaii in February 1979, and he returned here in April.

Bull Ramos - Ramos left in November and went to East Texas. He would return about a year later. Looking at his SPOT ratings from quarter to quarter, you can see he was phased down on his way out. His last week in the territory saw him lose singles matches to both Lanny Holiday and Buck Zumhofe.

Jimmy Snuka - Snuka left in late October to start his big run in Mid-Atlantic (though he would return for at least one shot over the holidays). His last matches here saw him lose to Roddy Piper and, in a tag match, teamed with Jonathan Boyd to lose to Bull Ramos & Dr. Hiro Ota. He was also booked in a Texas Death match against Bad News Brooks; results are not known but I would guess that Brooks won the bout.

Nationally known stars making appearances here in the quarter were Don Leo Jonathan, Gene Kiniski and Red Bastien. Both Jonathan and Kiniski appeared only on Seattle cards. Bastien's full-time career ended in December 1977, but he had a handful of matches in 1978 and 1979, including two here in November.

Midget wrestlers Butch Cassidy, Coconut Willie, Cowboy Lang and Tokyo Joe came in for two and a half weeks in late October/early November.

The two most frequently occurring main events during the quarter (using only the cards I have first-hand data for) both involved Jonathan Boyd and Bad News Brooks. They faced each other in 10 singles matches, and the team of Boyd & Dutch Savage faced Brooks & Roddy Piper 7 times.

As for the tag team matches: in Salem it progressed from a non-title match (won by Brooks & Piper) to a title match (where Boyd & Savage retained the belts). Both matches in Eugene appear to have been non-title matches. Most title histories list Brooks & Piper winning the belts on 12/31 in Tacoma. Boyd & Savage are listed as having won the titles from Buddy Rose & Ed Wiskowski on November 21st in Portland. Rose & Wiskowski were in Northern California, but they did work that Portland card in a losing effort to Boyd & Savage, so it would appear they returned that week (they also wrestled the night after in Seattle) to drop the straps.