In the first quarter of 1978, the top wrestlers in the Pacific Northwest included Jesse Ventura, Jimmy Snuka, Buddy Rose and Ed Wiskowski.

The below chart lists the wrestlers who were regulars in the territory between January 1st and March 31st, 1978. They are ranked by their Statistical Position Over Time, a number between .000 and 1.000 representing their average spot on the cards they were booked on; a 1.000 would mean they were always in the main event) 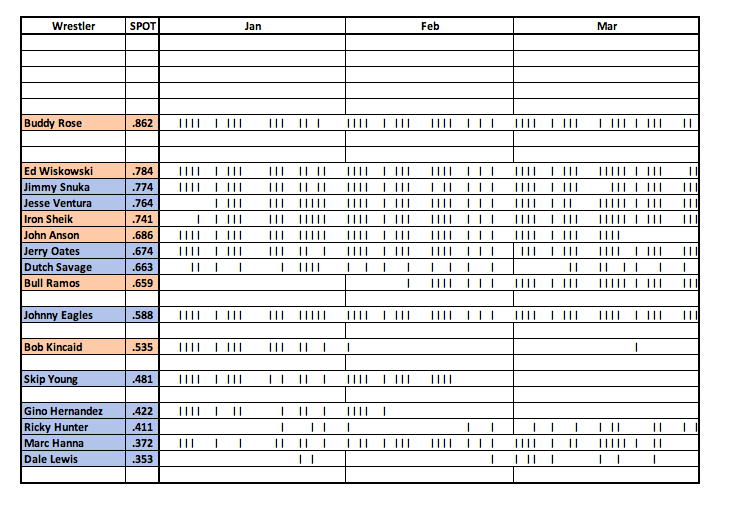 Bull Ramos - "Apache" Bull Ramos had been a regular here on-and-off since 1972. In late 1977 he was wrestling in east Texas. Bull spent the first five weeks of the year in All Japan before returning here in mid February.

The Iron Sheik - Sheik had been wrestling in east Texas in the summer and early fall of 1977, I believe using the name Iron Sheik Farouk. He came here in early January for his first and only stint in the territory.

Jesse Ventura - After spending the first six months of his career in Central States, Ventura came here in October 1975 for a long run. He started as a heel, but turned babyface to feud with former partner Buddy Rose for about a month before going to Hawaii in July 1977. He stayed there through the end of the year and returned here in early January.

Veterans Dale Lewis and Ricky Hunter were not full-timers but made enough appearances for me to calculate their SPOT. They often worked as referees on cards they didn't wrestle on.

Bob Kincaid - Kincaid left at the end of January to wrestle as The Texas Outlaw for All-Star in Vancouver. He would return here in early 1979.

Buddy Rose - Rose left the first week of April to go to Hawaii. On the way out, he dropped a stretcher match in Portland (billed as the first-ever such match in the city) and a loser-leaves-town match in Seattle, both to Ventura.

John Anson - Anson left in mid-March. By May, he was wrestling in Vancouver. It appears that the final matches of his career were in August of 1978.

Skip Young - Skip left in February and went to Tri-State. He would not return to this territory.

Other wrestlers of note who made appearances during the quarter:

Andre the Giant came here for several days at the end of January.

Don Leo Jonathan was booked on a couple of cards in Seattle during the quarter.

The two most frequently occurring main events during the quarter were:

Jesse Ventura vs. Buddy Rose - As mentioned above, Ventura beat Rose in a loser-leaves-town match in Seattle and a stretcher match in Portland. This matchup occurred three weeks in a row in Salem, three times in a five week period in Eugene, two consecutive shows in Seattle and twice in Portland.

Jimmy Snuka & Jesse Ventura vs. Buddy Rose & Ed Wiskowski - This matchup occurred four times in Portland, twice in Seattle, once each in Eugene and Salem, and once in Tacoma (a town I don't have complete data for).
1978 Pacific Northwest