In the fourth quarter of 1978, the top wrestlers in Mid-America included Randy Savage, Dutch Mantell and Bobby Eaton.


The below chart lists the wrestlers who were regulars in Mid-America between October 1st and December 31st, 1978. They are ranked by their SPOT (Statistical Position Over Time, a number between .000 and 1.000 representing their average spot on the cards they were booked on; a 1.000 would mean they were always in the main event) 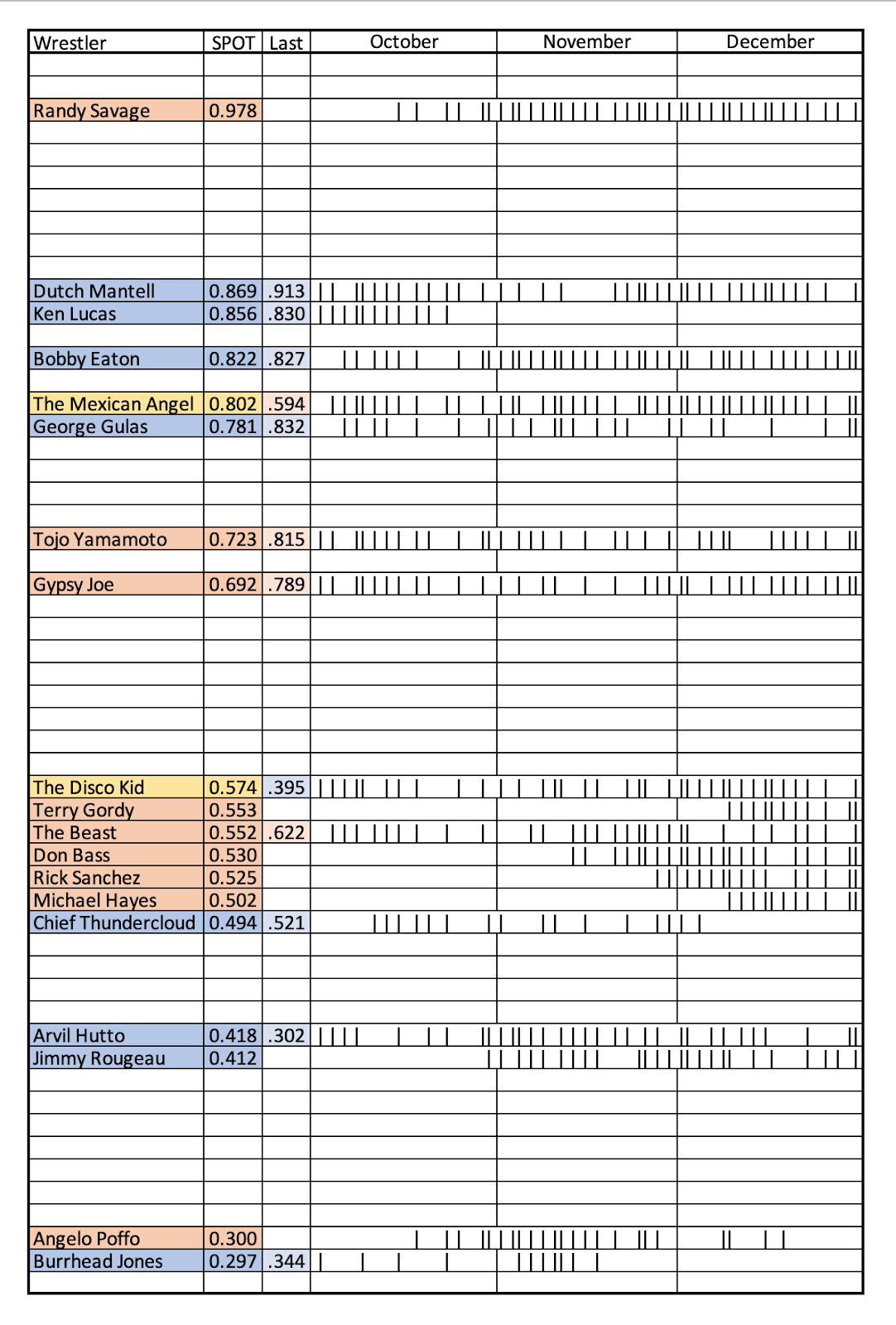 Angelo Poffo & Randy Savage - Poffo & Savage returned from Grand Prix in October. Both stayed into early 1979, though Poffo may have been injured or just used on a part-time basis after mid-December. In February '79, Poffo went to Portland and Savage went to Detroit; each stayed until early April when Poffo opened up his ICW promotion.

Chief Thundercloud -Thundercloud returned in October after taking a few weeks off. After early December he was booked on a part-time basis for a few more months.

Don Bass - Bass came here in November after spending about a month and a half working for Jarrett. Bass had worked for Gulas previously dating back to 1972, but this was his first stint with him since the split with Jarrett the previous year.

Jimmy Rougeau - Rougeau, later known as Jacques Rougeau and the Mountie, started for Gulas as an 18-year old in late October. He had been wrestling in Stampede for a couple of months after working occasionally in Detroit early in the year. In 1979 he would change his ring name to Jerry Roberts, but would start using Jacques Rougeau (or in some cases Jacques Rougeau Jr.) in 1980.

Michael Hayes & Terry Gordy - Hayes & Gordy came in together in December after working as a team for the Culkins in Mississippi. Hayes was 19 years old at the time; Terry was 17. They may have started here as babyfaces, as they wrestled against heels more often than not for the first couple of weeks. By the end of the year, however, they were definitely positioned as heels.

Rick Sanchez - Sanchez had wrestled for Gulas several times before dating back around 10 years. In most other territories he used the name Abdul Zaatar. He had been using that name for Jarrett for a couple of months before coming here in late November.

Burrhead Jones - Jones left in mid-November and shows up in Southeastern before the end of the year.

Ken Lucas - Lucas left in October and returned to Southeastern.

You can see there is a lot less turnover at this point in time. Nine wrestlers (Arvil Hutto, the Beast, Bobby Eaton, the Disco Kid, Dutch Mantell, George Gulas, Gypsy Joe, the Mexican Angel and Tojo Yamamoto) all stayed in the territory for the entire three month period. The newcomers were a mix of VERY young talent (Rougeau, Hayes & Gordy), outlaw or outlaw-friendly wrestlers (the Poffos and the Sheik), and veteran drifters with a history of working for Gulas (Bass & Sanchez). One can read between the lines and surmise that the NWA was "leaning" towards Jarrett more than a year after the split, though Gulas was still technically an NWA member (Harley would come in January to defend the World title), plus there still seemed to be a good relationship with the Georgia office, as you'll see below.

Las Vegas Louie managed Gypsy Joe & Tojo Yamamoto in October. He finished up in November and was booked in a few singles bouts against either Dutch Mantell or George Gulas on the way out.

Nationally known stars passing through the territory during the time period: Andre the Giant, Jackie Fargo, Mark Lewin and the Sheik. In addition, Chattanooga used several wrestlers from Georgia at the end of the year and into January 79, including Luke Graham, Mr. Wrestling, Ole Anderson, Thunderbolt Patterson and Tommy Rich. Georgia television aired in Chattanooga and the territory ran a reduced schedule around the holidays, so this freed up many of the guys to work Chattanooga make a little money.

Jim Dillon and Walter Johnson (former defensive tackle with the Cleveland Browns) started in December but were not booked on enough cards to be considered "regulars" in this quarter.

Women midget wrestlers Princess Little Dove, Marie LaVeau and Baby Cheryl were booked for a week and a half in late October/early November. Little Dove was advertised against LaVeau for a couple of shows, then against Cheryl for a couple.

Next up on Charting the Territories, we will stay in 1978 but head out west to the Pacific Northwest territory. A lot of well-known stars passed through the territory in '78, it should be a fun trip down memory lane.
1978 Gulas