The below chart lists the wrestlers who were regulars in Mid-America between July 1st and September 30th, 1978. They are ranked by their SPOT (Statistical Position Over Time, a number between .000 and 1.000 representing their average spot on the cards they were booked on; a 1.000 would mean they were always in the main event) 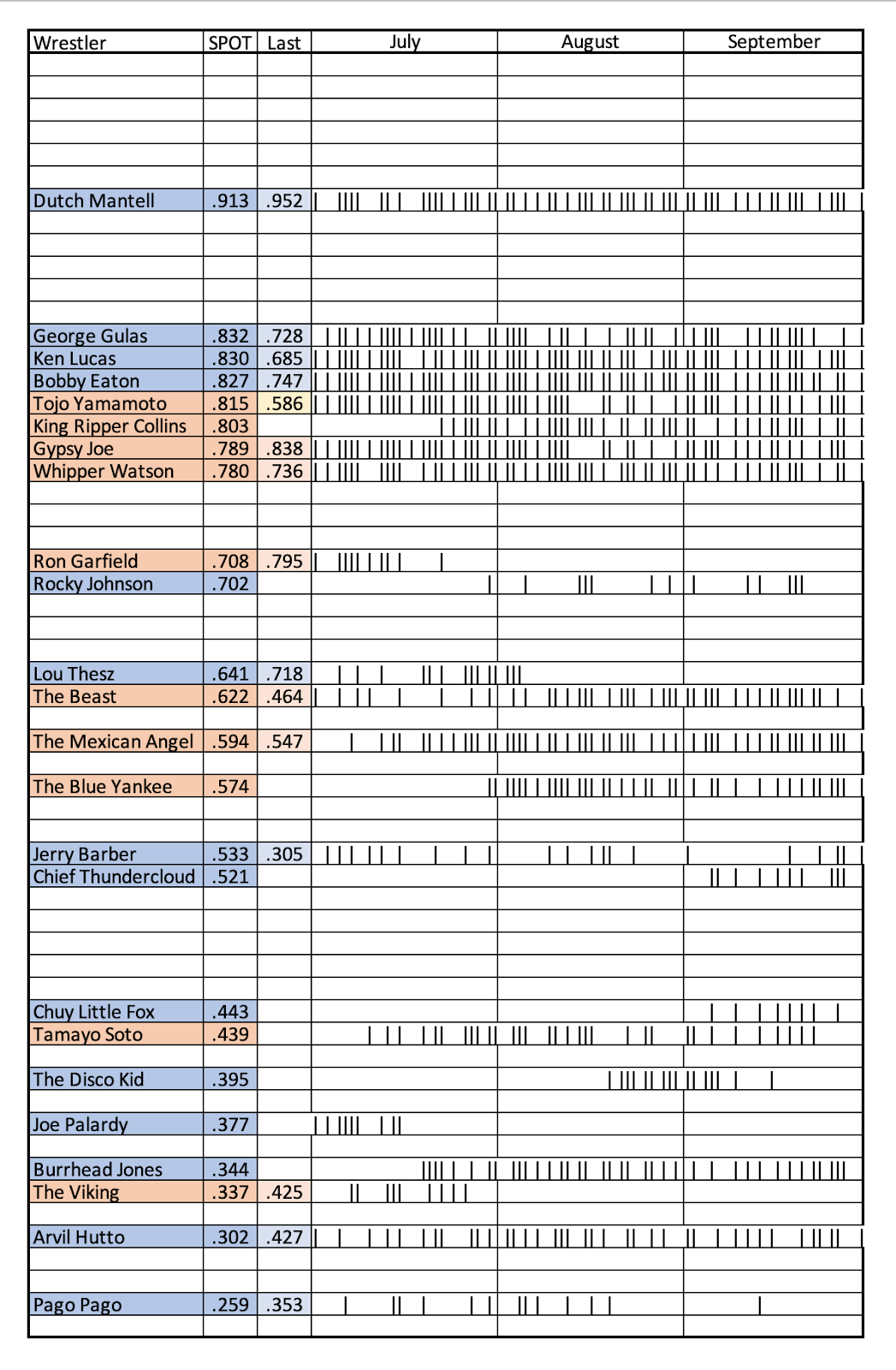 The Blue Yankee - Curtis Smith wrestled under several masked gimmicks over the course of his career, most notably as one half of the second iteration of the Infernos with his brother Rocky. He had been wrestling as the Blue Yankee in Central States before coming here at the end of July. On at least one occasion he was billed as the Mighty Yankee here, but the majority of ads list him as Blue Yankee.

Burrhead Jones - Burrhead spent the first half of the year in Southeastern, coming here in mid-July. He had wrestled on and off for Gulas dating back to 1972. He was sometimes billed as the cousin of Rufus R. Jones, which may have been legit.

Chief Thundercloud & Chuy Little Fox - During Chief's run here earlier in the year, Chuy was his manager (often billed as his "drummer boy"). Chief returned from Puerto Rico in September, and this time, Chuy joined him in the ring. Per wrestlingdata.com, Chuy was Chief's son in real life. Chuy stopped wrestling at the end of September; it is unknown if he returned to his role as manager/drummer boy, as his name is not listed in any advertisements after that point.

The Disco Kid - This was Rip Rogers, who had wrestled occasionally here earlier in the year as Mark Sciarra. After wrestling some in the WWA and over the summer for Grand Prix, he came here in mid-August. For his first week here, he was advertised as the Disco Man; it was changed to the Disco Kid after that.

King Ripper Collins - Collins, best known for his time in Hawaii in the late 60s and early 70s, came here once before, shortly after the split with Jarrett. He had been wrestling for the Culkins in Mississippi since November 1977 and returned here in July. After retiring from in-ring competition in 1980 he opened up a nightclub in Hawaii called The Squared Circle.

Joe Palardy - "Joltin" Joe wrestled for various territories between 1975 and 1979. His only stint here started in late June and lasted about a couple of weeks. He may have returned to the ring in 1985 for Championship Wrestling from Georgia.

Pago Pago - Pago wrestled here on a semi-regular basis in the third quarter of the year. After September, his name doesn't show up anywhere until a brief run here in May 1979, and nothing after that.

Rocky Johnson - Rocky should probably be placed in the "nationally known stars passing through" category, but I wanted to include him as a regular so that I could show his SPOT rating of .702, which seems low. It appears that both he and Lou Thesz were just used to add some star power to Gulas' cards, especially as he was running opposition to Jarrett in Louisville AND facing opposition from Jarrett in Chattanooga. Rocky had been wrestling in East Texas, and spent about two months going back and forth between here and there plus making shots in St. Louis.

Tamayo Soto - Soto, who wrestled under several different names over the course of his career, came here in July and stayed for just over two months. Soto had a few runs for Gulas in the 60s, but hadn't been here since 1970. Among the other names he used were Joe Soto and Rocky Tamayo.

Lou Thesz - Thesz jumped ship to Jarrett in August. He was reportedly unhappy with his payoffs working for Gulas. At one point he was advertised for Gulas and Jarrett cards two days apart in Chattanooga. It appears he worked both of them, but after that did not make his scheduled appearance in Nashville for Gulas.

Ron Garfield - Ron finished up his run here in July. I don't have any knowledge of his whereabouts afterwards.

The Viking - Viking finished up in July. Looking at my theories on who this _might_ have been from Part 2, I'll take a look at where those wrestlers showed up next. Bobby Kay starts for Mid-Atlantic in September 1978. Rudy Kay's name doesn't show up anywhere until Grand Prix in August of 1980. El Vikingo's name doesn't show up again until 1980 in Puerto Rico, but there isn't much info on Puerto Rico during this time so that doesn't mean much.

Las Vegas Louie managed Gypsy Joe, Tojo Yamamoto, Whipper Watson & King Ripper Collins throughout the quarter. He also managed Ron Garfield while Garfield was here. There are listings of him managing the Mexican Angel and the Blue Yankee, but those may just be cases where they were teaming with one of Louie's regular charges and the ad just lists Louie as the manager of the team.

Nationally known stars passing through the territory during the time period: Jackie & Roughhouse Fargo, the Sheik, Mark Lewin and Harley Race, who defended the NWA World title against Dutch Mantell on September 20th in Nashville.

Other wrestlers with bookings during the time period included Butch Thornton (who continued to work just in Chattanooga; as a point of reference, his SPOT for the quarter was .643, placing him just above ... Lou Thesz), Buck Forrest, Rick McCord, Don Kent, King Kong Gordon, Eric Embry, Gene Spurlock, the Masked Odysseys, George Weingeroff, Mike Jackson, Dale Mann and Tony Santos.

Pepper LaBianco and Wenona Little Heart were in for a couple of weeks in July. Joyce Grable and Suzette Ferreira were in for a week in September. Cora Combs, Debbie Combs and Sherry Lynn had multiple appearances. Heather Feather made several appearances in late August and September, primarily feuding with Las Vegas Louie.

Ginger the Wrestling Bear had a few stints here during the quarter.

I mentioned Harley Race coming in for a title defense in Nashville. That card, on September 20th, was absolutely stacked. Underneath Harley-Dutch was a cage match with the Sheik scheduled to defend his NWA U.S. title against Rocky Johnson (who did not appear on the card; Mark Lewin took his place), Jackie & Roughhouse Fargo, the Fabulous Moolah, and a one-night tournament for the Mid-American title, which was won by the Mexican Angel.