In the second quarter of 1978, the top wrestlers in Mid-America included Randy Savage, Dutch Mantell and Don (Fargo) Garfield.

The below chart lists the wrestlers who were regulars in Mid-America between April 1st and June 30th, 1978. They are ranked by their SPOT (Statistical Position Over Time, a number between .000 and 1.000 representing their average spot on the cards they were booked on; a 1.000 would mean they were always in the main event) 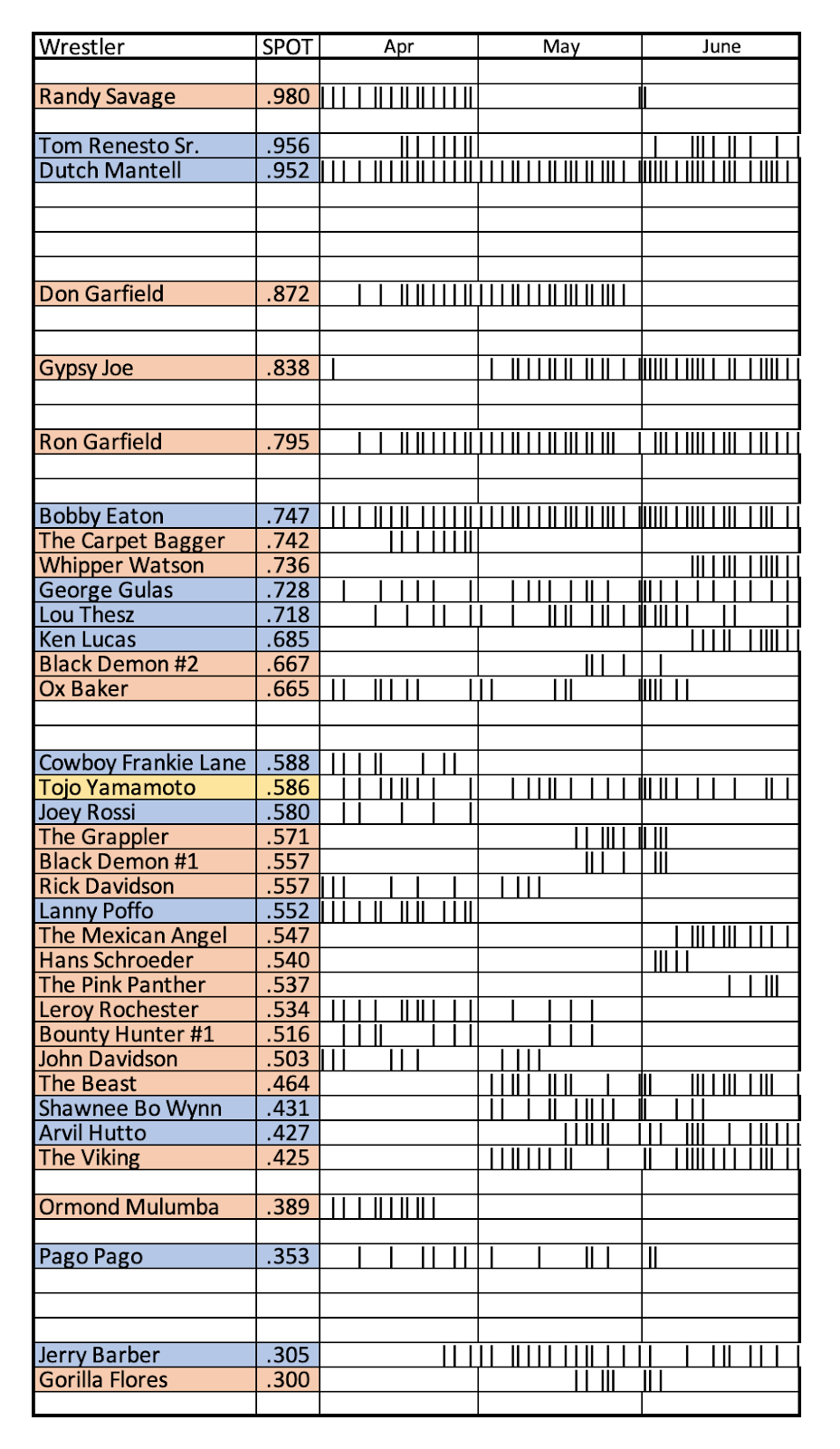 Arvil Hutto - Hutto was a long-time friend of Bobby Eaton. He had wrestled a handful of matches for Gulas dating back to the summer of 1977, and became a regular in mid May.

The Beast - Yvon Cormier wrestled throughout the US and Canada as the Beast, and all the evidence points to this being him. It looks like he was in Puerto Rico before coming here in early May.

The Black Demons - The identity of these wrestlers is not known. They were here for a couple of weeks in May. This may have just been two guys thrown under masks to balance out the face/heel ratio, as several heels left the territory all around the first two weeks of May.

The Carpet Bagger - This was Angelo Poffo under a mask, though on at least one occasion during this run he was advertised as Angelo Poffo. He was here for a couple of weeks in April, then went to Grand Prix (along with both of his sons). He would return in October.

Cowboy Frankie Lane - Lane, who was here in late 1977, had been wrestling for Jarrett in the early part of the year. He then spent a week or so in Georgia before coming here at the end of March. He stayed for about a month before going back to Jarrett,

Don & Ron Garfield - Don was Don Fargo. This fact was acknowledged by the promotion; some advertisements listed him as Don (Fargo) Garfield. A post on Wrestling Classics says that Ron was actually named Earl White. The story goes that Fargo met him at a bar in Amarillo (where Fargo was wrestling in the beginning of the year), got in a fight with him, and was impressed enough with his fighting ability that he trained him to be a wrestler. I have a hunch that this was not the only time Fargo broke someone into wrestling in that way. The two started here in early April, but Don left in late May and went to Jarrett for a couple of weeks while Ron stayed here. Don may have been Mid-America champion when he left, and Gulas may have just switched the title to Ron and pretended he had been the champ all along.

George Gulas - Gulas returned to a full-time schedule in the spring after returning from an elbow injury (not sure if it was legit or storyline).

Gorilla Flores / The Grappler / The Mexican Angel - All three of these roles are believed to have been portrayed by Francisco Flores. If that's the case, it means that Francisco wrestled twice on the same card several times, as Gorilla Flores and the Grappler were booked in separate matches on the same card frequently. The Grappler was definitely unmasked and revealed to be Flores in more than one town, and Flores then definitely continued to wrestle here as the Mexican Angel. It's possible that someone else was the Grappler up until he was unmasked, but I have no evidence to support that.

Hans Schroeder - Hans was booked here for a couple of weeks in June. However, he may not have actually shown up. For the cards I have results for, his name does not appear, and it appears he actually worked for Jarrett during the same time period.

Jerry Barber - Jerry had been working for Gulas dating back several years, but had not been here since October 1977. His name doesn't show up anywhere else until he returned here at the end of April.

Ken Lucas - Ken came here in June from Central States. He had a few prior stints for Gulas dating back to 1968.

Lou Thesz - Thesz had retired in 1970, but returned at a limited schedule in 1973, including running opposition to Gulas in 1976 in Nashville and Chattanooga. His last known match before coming here in April was the prior November for Henry Rogers in Missouri.

Ormond Mulumba - Mulumba came in at the end of March and stayed for about a month. Before coming here, his last known bookings were for New Japan in early 1977 as Brutus Mulumba. After leaving here, his next known stint was in Grand Prix starting in July 1979.

The Pink Panther - This wrestler's identity is unknown. He was here for a couple of weeks in June. He often wrestled against Ginger the Wrestling Bear (see below). It may have been someone who traveled with the bear, though the dates don't line up exactly.

Shawnee Bo Wynn - Wynn returned for a month and a half stint starting in May. After this run, he had at least one match later in the year for Gulas, as well as a handful of matches in 1979. An article in the Nashville newspaper in March discusses Wynn being trained by Lou Thesz, and mentions Saul Weingeroff as his manager, though Saul does not seem to have appeared with him at any wrestling events. This article also helped me pinpoint his identity; he is not the "William Wynn" I mentioned in Part 1. Shawnee was his real name, and he played for Tennessee State in 1973 (with Ed "Too Tall" Jones) and the Houston Texans of the WFL in 1974.

Tom Renesto Sr. - Tom had been retired from the in-ring aspect of wrestling since Gunkel's All-South closed up, but was booking for Gulas. He did an angle on TV with Randy Savage which led to him being a special referee for Savage's matches around the loop, which then led to him coming out of retirement to feud with Savage.

The Viking - The identity of this wrestler is unknown. He came in early May. It doesn't seem to be Bob Morse, who wrestled as the Viking in Central States and other places, but retired in 1975. He came at the same time as the Beast, so I wonder if he was one of Yvon Cormier's brothers. Cormier had three brothers who wrestled: Leo Burke, Bobby Kay and Rudy Kay. Burke was in Stampede during this time, but there are no records of Bobby or Rudy wrestling anywhere at the time the Viking was here. It's possible one of them was the Viking, but I have absolutely no evidence other than a hunch. Another theory: when the Beast was in Puerto Rico, there was a wrestler there by the name of El Vikingo who has no Puerto Rico appearances during the time the Viking was here. Vikingo mostly wrestled in Puerto Rico his entire career, but did work Stampede. Could be the same guy, but basically a wild guess on my part.

The Bounty Hunter - I still don't know if this was one of the Novak brothers or someone else. This wrestler left Gulas in May. David Novak started for Jarrett in June, and Jerry Novak joined him as a regular in October.

Joey Rossi - Joey's run here as a full-timer ended in April. He wrestled sporadically for another month or so before going to Mississippi in June for the Culkins.

John & Rick Davidson - The Davidsons left in mid-May. Their whereabouts after that are unknown until a year later when they show up in Puerto Rico.

Lanny Poffo & Randy Savage - Both left (along with their father) at the end of April and went to Grand Prix. Savage was booked here for a couple of dates at the end of May, and would return later in the year.

Leroy Rochester - The future JYD left in May, and may have gone back to North Carolina and worked outlaws for the summer. His next known major bookings were in Germany in September, where he stayed for a month and a half before going to Calgary. According to Beau James, he was sent to Germany by Stu Hart as a precursor to coming in to Stampede.

Ox Baker - Ox left in June. He then made a couple of appearances for the WWA, and then went to Japan in September.

Pago Pago - Pago took about a month off in early June. It is unknown if he went somewhere else, was injured, or just took some time off.

Not included above is Joe Palardy, who started the last week of June.

Las Vegas Louie managed Don & Ron Garfield when they debuted here. It is said that Louie owned a local furniture store, and he may have actually paid Gulas to be a manager. After Don Garfield left, Louie also started managing Gypsy Joe. He then added Whipper Watson & Tojo Yamamoto to his stable in late June.

Nationally known stars passing through the territory during the time period: Jackie Fargo, Mr. Wrestling II, the Sheik and Tommy Rich. Don Ross made a few appearances in May.

Other wrestlers with bookings during the time period included Bill Helm & Joe Ball (who worked in Louisville when Gulas started running there in May), Bobby Whitlock, Eric Embry, the Masked Marvel, Mike Porter (who years later ran NWA Main Event out of Nashville), Spider Man, Tony Santo and the Wolfman.

Midget wrestlers Fuzzy Cupid & the Carolina Kid finished up their three week stay that began in March. Carolina Kid then returned along with Kid Chocolate for a week and a half in June. On at least one of the shows they were here for, Billy the Kid was advertised instead of Kid Chocolate.

Ginger the Wrestling Bear was here for a week at the end of June.

In Part 3, we'll cover July through September of 1978. New faces will include a Yankee, a King, a Soulman, a Roughhouse, and a Disco Man (who then becomes a Disco Kid).
1978 Gulas