NWA Mid-America, promoted by Nick Gulas (with Harry Thornton as co-promoter in Chattanooga), operated out of Nashville. The split with Jerry Jarrett happened the year before, so at this point in time the promotion ran a much smaller geographical area than in the past. Starting in May the promotion would run opposition to Jarrett in Louisville, with Jarrett retaliating by running opposition in Chattanooga. By the end of the year, both stopped running opposition and focused on their defined areas. The weekly loop looked like this:

-Chattanooga was run on Sundays 14 times during the year and once on Friday, but every other week was a Saturday
-They ran Louisville, KY between May and September; the shows bounced around between Tuesdays, Thursdays and Sundays

I have data for 258 cards from 10 different cities. These maps show the cities and towns I have (at least some) data for. 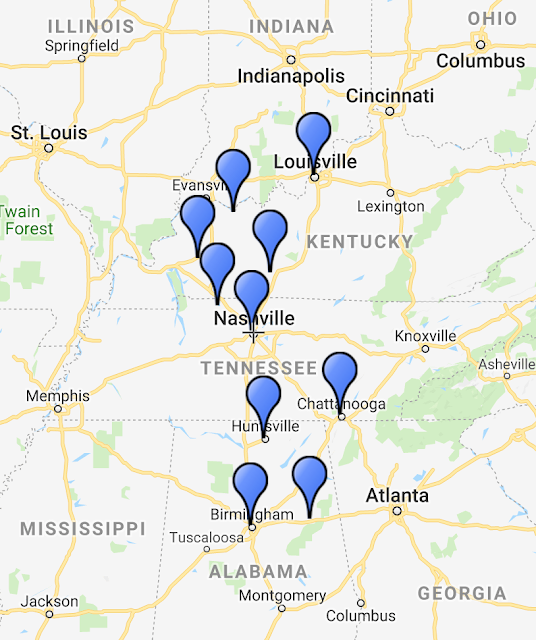 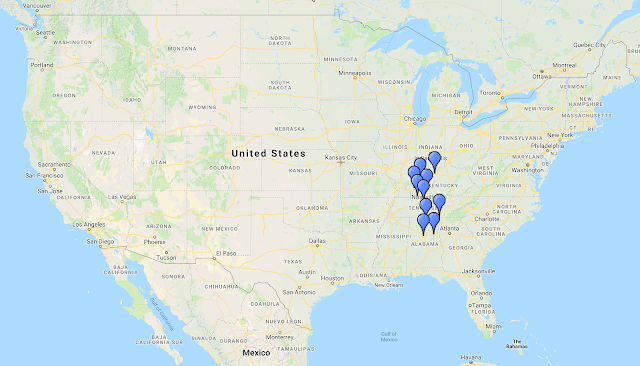 The following wrestlers were on the "full-time" roster at the end of 1977:

Bobby Eaton - Bobby debuted for Gulas back in 1976, making sporadic appearances on TV and in prelims. He started as a full-timer with a pushed role in October 1977.

Don Kent - Don had been making regular appearances since August, but also wrestled for the Sheik, the WWA and Georgia during this time. He had teamed with Al Costello as the Fabulous Kangaroos from 1967-1975, as well as a brief reunion in Puerto Rico in early 77.

Joey Rossi - Joey, the son of Len Rossi, returned from Mid-Atlantic in April.

Lanny Poffo - Lanny came here in August from Mid-Atlantic. He started as a heel, but turned babyface in December. Lanny debuted as a pro in 1973, working shows for Phil Golden for several months.

Len Rossi - Len, a fixture of the Gulas territory for almost fifteen years starting in 1958, had been retired since he was severely injured in a car accident on December 8th, 1972. He was advertised as a special referee in Nashville in July of 1977. The following month he announced he was training for a comeback and returned in October.

Pez Whatley - Pez had been here since April, though he did a seven-week tour for New Japan starting in late August.

Tojo Yamamoto - Aside from a handful of matches for the Sheik during 1977, Tojo was a regular here all year (and for many years prior). Aside from Chief Thundercloud and George Gulas (both of whom appear to be on the injured list at this time, either in storyline or for real), he was the last wrestler remaining who stuck with Gulas when the split with Jarrett occurred.

Angelo Poffo - Angelo came here with Lanny in August after spending some time in Florida and Grand Prix. Even though Lanny turned babyface at the end of the year, Angelo stayed as a heel.

Buzz Tyler - Buzz came in with Rip Tyler and Bad Boy Hines in November. He had worked for the IWA (this was after Eddie Einhorn left) in the early part of the year.

Gypsy Joe - Joe started 1977 in Stampede, then did a tour of Japan for IWE before coming here in June. He returned to Japan for a week in August and then returned here.

Rip Tyler - Rip had spent several months working for the IWA in North Carolina and then the Culkins in Mississippi (after they split from Leroy McGuirk) before coming here in November.

Butch Thornton - Butch, son of Chattanooga announcer and co-promoter Harry Thornton, was a regular ...  in Chattanooga only. He was on pretty much every card there during this time, and I imagine he was on their TV as well, since the Chattanooga TV was aired live Saturday afternoons and filmed at the local station. He was on just a handful of other cards in the territory during 1978, so I don't consider him a regular.

Don Ross - I am also not counting Don as a regular, as he was booked more as a special attraction than as a regular member of the roster. Don won the WBBG Mr. America bodybuilding title in 1977, and later in the year wrestled a handful of matches for the Sheik before coming here. He was generally booked in the last match of the night, but it was often billed as a special attraction and not the "main event". Also, his opponents were generally not main event caliber. He may have wrestled in southern California for a few years in the late 60s and early 70s as the Invader. Years later, he definitely did wrestle in southern California as Ripper Savage.