In the third quarter of 1966, the top wrestlers in Florida included Jose Lothario, Eddie Graham, Wahoo McDaniel, the Masked Medics, Sputnik Monroe and the Von Stroheims.

The below chart lists the wrestlers who were regulars in Florida at some point between July 1st and September 30th, 1966. They are ranked by their SPOT (Statistical Position Over Time, a number between .000 and 1.000 representing their average spot on the cards they were booked on; a 1.000 would mean they were always in the main event)

Amazing Zuma - Zuma came here at the end of July from Tri-State. Newspaper ads in Orlando and Eau Gallie listed him as Amazing Zuma whereas most other papers billed him as Argentina Zuma. Zuma was compared throughout his career to Argentina Rocca and at one point worked a program with him in New York, with 3 matches at Madison Square Garden between November 1959 and January 1960.

Bobby Daniels - Daniels came here in July from Gulf Coast. He stayed about a month and then went to East Texas, where he wrestled as Nick Adams. He continued to use the Adams name for the rest of his career, which included a few more brief stints here between 1967 and 1971.

Dick Steinborn - Steinborn was wrestling in Georgia over the summer, but making periodic trips here during that time. He was in as a regular starting in late August. He had spent a lot of time here dating back to the early 1950s, as his father Milo was the promoter in Orlando. His most frequent opponents over the course of his career were Jody Hamilton and Tom Renesto.

Hiro Matsuda - Matsuda returned in late August. He had left here in the spring to go Tri-State, and after staying there for about a month he worked a couple of shots here before going to Japan in late May for a little over a month.

The Infernos - The Infernos returned in early September after a five and a half month run in Georgia. Some online sources have them wrestling in Birmingham over the summer, but that was almost certainly the Blue Infernos, who were Frank Martinez & Gypsy Joe.

Jim Osborne - Came here in mid-July from Gulf Coast, left in early September and went to Georgia. This was his only stint in Florida. Also wrestled as Paddy Osborne, Red Osborne and Dr. X over the course of his 15-year career.

Ken Ackles - Ackles was here for a few weeks in July for the second of his two stints in the territory, with the first one back in 1952. His whereabouts right before coming here are unknown, the most recent data I found has him in the WWWF through May 1965. When he left here, he worked a shot for Georgia and then went to Gulf Coast for a month.

Mike Paidousis - Paidousis returned from parts unknown in mid-July. He stayed for about 6 weeks and went to Southern California at the beginning of September. He would return for a couple of shots in 1967 and then again in 1972 for a brief stay.

The Mummy - This Mummy was Benny Ramirez; he was probably the most well-known version of the gimmick. This was his first and only stint in the territory. He came in late August from East Texas. On July 19th, 1965, Ramirez was stabbed by a 79-year old fan after a match against Pedro Morales in Pasadena, CA. He missed about a month of action while recovering.

Pancho Rosario - Rosario came here from Georgia for the first time at the end of July. He stayed a couple of months and then went to Tri-State in October. He would return here in 1970, where he was billed at times as Gypsy Joe Rosario. He also wrestled as Pancho Valdez in other territories. A few years earlier he worked for Tony Santos and Jack Pfefer as "Bruno SamNartino", purposely meant to confuse fans into thinking Bruno Sammartino would be on the card.

Pedro Amessa - This was Pedro's second stint in the territory, with the first coming in 1963 under the name Indio Joe. He came in mid-June from East Texas, where he was wrestling as Indian Joe. He left in early October and went to Georgia as Argentina Amessa. He would return here in 1970 and 1974, using yet another name, Tony Romano. As Romano, he frequently teamed with Joe Soto in Mid-Atlantic between 1970 and 1973.

Roberto Gonzales - Gonzales came here at the beginning of August; prior to that, he was wrestling in Stampede in May & June. He stayed through the end of the month and then went to East Texas. He would return in 1968. Gonzales also wrestled as Pedro, Pepe, Pete and Speedy Gonzales over the course of his 6 1/2 year career.

Silento Rodriguez - Silento came here in late July from Gulf Coast for his first stint in the territory, though he was booked here for about a week back in 1959. He was deaf and mute, hence the Silento name. After spending a few years in Mexico, Silento first came to the U.S. in the summer of 1959, wrestling in East Texas.

The Masked Medics - The Medics left in late July. They went to Gulf Coast, where they wrestled separately as Dick Dunn and Willie Garrett for a month before going to Georgia and teaming up as the Red Raiders. Dunn would return here in 1967 as himself, and Garrett would return in 1968 with Jim Starr as the Masked Medics.

Tarzan Tyler - Tyler went to East Texas at the beginning of August. He would return a year later for another stint, and would continue to come here on and off through 1971. After that, he wrestled one or two matches here in 1975.

Wahoo McDaniel - Wahoo left in mid-July. It was reported that he signed his contract with the Miami Dolphins the last weekend of July, and had no wrestling bookings over the summer before the AFL season started in September. The season ended on December 18th, and two nights later he was booked in Odessa, TX. He would stay in Amarillo for about a month and then return here.

Nationally known stars passing through the territory during the time period: Gene Kiniski and Lou Thesz.

Women wrestlers with more than one booking during the time period were the African Lioness (this does not appear to be the same woman who was here the previous quarter as the African Princess; in fact, one newspaper ad lists this woman as Georgia "The Masked Lioness" Brown, and at least one online source says this was indeed Sweet Georgia Brown), Bonnie Watson, Ethel Johnson, Penny Brooks, Sherry Lee, Susan Slade and Toni Rose.

Women midget wrestlers Darling Dagmar and Diamond Lil came in for about a week and a half in July.

CWF started running shows in Tallahassee in July of 1966; prior to that, Gulf Coast had been running the town but had not been there since the previous October. While the first few cards CWF ran were fairly typical lineups for the territory, the July 29th card saw half of the card imported from Georgia. Undercard wrestlers Evil Eye Valentine (later known as Enforcer Luciano), Chief Crazy Horse, Bob Armstrong and Kenny Mack all came in from Georgia to work the card. The four also wrestled at the TV tapings the next day in Tampa and that night in Lakeland (with Gordon using the name Jimmy Valentine in Tampa and Lakeland), but that seems to be the only CWF shows they worked at this time. The main event saw CWF regulars Jose Lothario & Silento Rodriguez take on Mike Paidousis & Don McClarity. 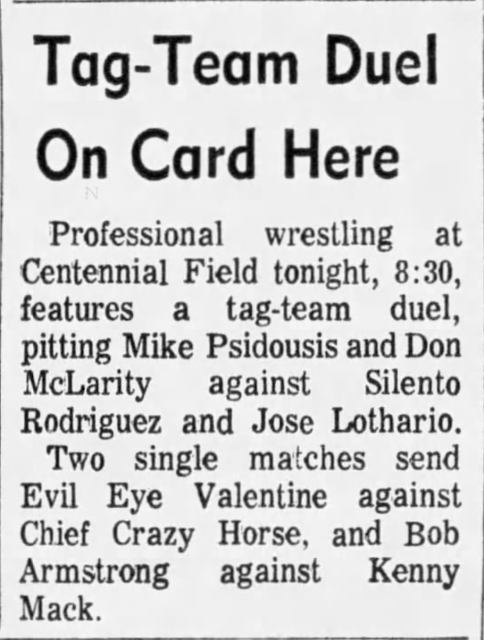