In the third quarter of 1966, the top wrestlers in Central States included the Stomper, the Viking, Bob Geigel, Bob Brown and Jack Donovan.

The below chart lists the wrestlers who were regulars in Central States at some point between July 1st and September 30th, 1966. They are ranked by their SPOT (Statistical Position Over Time, a number between .000 and 1.000 representing their average spot on the cards they were booked on; a 1.000 would mean they were always in the main event)

It appears that the territory ran less shows during the summer months. This holds true for several years that I've looked at. For example, St. Joseph, a weekly stop most of the year, was not run between the end of June and mid-October in 1966. Because of this, the roster in the summer months is significantly smaller than the rest of the year.

Newcomers (or returnees) to the territory during this time period:

Carlos Kalon - Carlos Colon started here at the end of June, which appears to be two weeks before his 18th birthday. He may have wrestled earlier in the year for the WWWF as Prince Kukuya. His last name was usually spelled "Kalon" in newspaper ads here, but was spelled "Colon" on more than one occasion. Born in Puerto Rico, Colon trained at the same gym as Antonino Rocca and Miguel Perez in New York, which was how he got in to wrestling. He wouldn't return to Puerto Rico until 1973, at which point he founded Capitol Sports Promotions, more commonly known as the World Wrestling Council, with Victor Jovica.

Jack Donovan - Jack wrestled here as Jack Dunnevant back in 1956, and this was his first time back here since then. He was known as "Dandy" Jack Donovan in most places, but here he was billed as "Handsome" Jack Donovan, perhaps to avoid confusion with manager Dandy Jack, who left shortly before Donovan came in. He came here from Amarillo in June. Donovan teamed up with the Viking frequently here, and they had many heel vs. heel matches against Bob Geigel & Bob Brown in the second half of the year.

Tim Geohagen - The Irish-born Geohagen came here at the end of June from British Columbia. This was his first and only stint in the territory. On more than occasion, newspaper ads listed him giving "hypnosis demonstrations" prior to his matches. This was apparently legit, as he is said to have studied hypnosis under noted psychiatrist and author Maurice Nicoll.

Alex Perez - Perez left in early September and wrestled at least once for All-Star in Nebraska before going back to Amarillo, where he had wrestled in the spring. He was advertised for a card here in December, but after that wouldn't return to the area until 1978.

Bobby Hart - Hart left in July and was probably wrestling full-time for Northland Wrestling Enterprises in Ontario over the summer. He would come back to the states in October, working some shots in East Texas and here before going to Georgia.

The Stomper - Stomper left at the end of June, He wrestled at least once for All-Star in Nebraska in July, then went to Hawaii in August. He would return here for a few shots in 1967, but wouldn't return as a regular until December 1969.

Women wrestlers with more than one booking during the time period were the African Princess, Betty Niccoli, Jean Antone, Verne Bottoms and Sweet Georgia Brown.

The August 21st card in Cedar Rapids, IA has a little something for everyone. A hypnosis demonstration, women wrestlers, a former NWA World Heavyweight champion, and an 18-year old rookie that would go on to become a Puerto Rican legend. 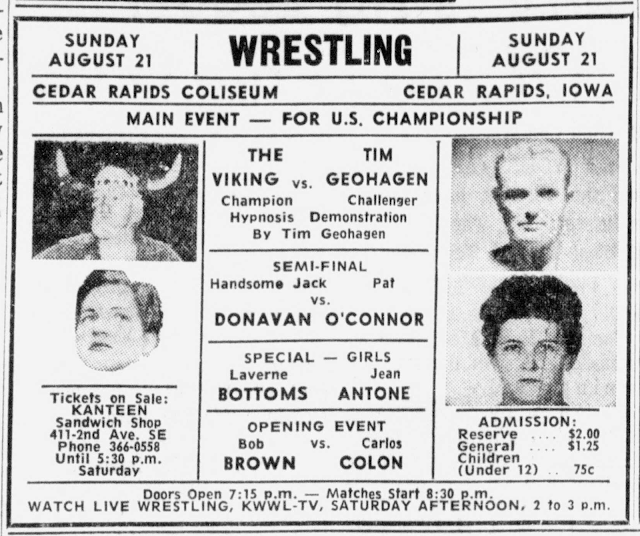