Heart of America Sports Attractions, more commonly known as the Central States territory, operated out of Kansas City. The most frequently run cities in 1966 (that I have data for) were:

I have data for 194 cards from 17 different cities and towns. 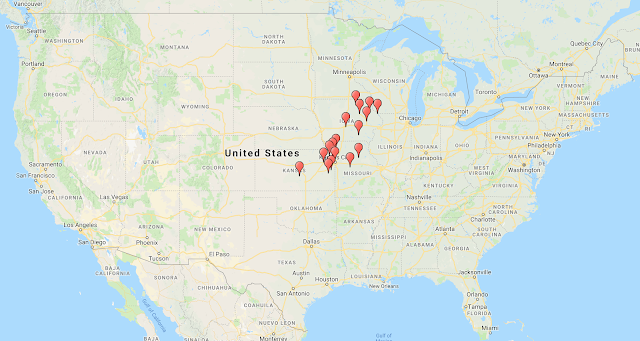 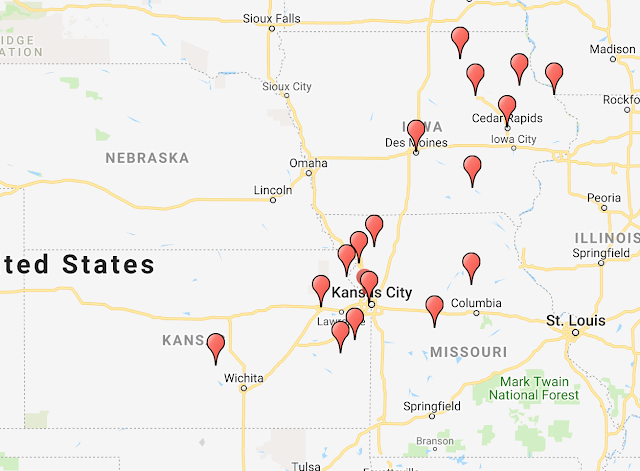 It should be noted that while results are available online for several weekly cards in Wichita, KS (run on Mondays), I do not have the ads or programs for this town, thus am not using them for SPOT calculations.

Bobby Shane - Shane debuted in May 1964 in the Pacific Northwest as Bobby Schoen. He came to Central States in January 1965, leaving in April to spend a couple of months in the Tri-State territory, followed by a run in Florida starting in September, before returning to Central States in late October. Though best known for his heel runs in Florida and Georgia, he was always a babyface when wrestling in this territory on and off through February 1970.

Cowboy Bob Ellis - Ellis first started coming to Central States in September 1958. By late 1965, Ellis was a regular in the territory but I would not consider him a full-timer. He wrestled here a couple days a week most weeks, but had regular bookings for other promotions, including the AWA, All-Star Wrestling in Nebraska, the Sheik's Big Time Wrestling and the Gulf Athletic Club in east Texas.

Lee Henning - Known as "Bulldog" Lee Henning, he had been a regular here off and on since 1958. He also had wrestled here several times very early in his career in the mid-1930's. Spent April and May of 1965 in Florida after beginning the year in Mid-Atlantic. No results for him were found after leaving Florida in early June until he returned to Central States in mid-October.

Pat O'Connor - A former NWA World Heavyweight champion (winning it from Dick Hutton in January 1959 and losing it to Buddy Rogers in June 1961), O'Connor at this point in time was a part-owner of this territory. While he mostly wrestled here throughout 1965, he did have a run in Tennessee for Nick Gulas early in the year, and made appearances for Fred Kohler in Chicago, the AWA, Amarillo and Mid-Atlantic.

Sonny Myers - Born in St. Joseph, MO, Sonny made his debut here in July of 1944 (which may have been his pro debut). Even though he wrestled all over the U.S. (as well as stints in Canada and Japan) he spent at least a little bit of time wrestling in this territory every single year from 1944 through 1968. He also operated Sonny Myers' Carnival throughout the midwest.

The Stomper - Better known as the Mongolian Stomper, Archie Gouldie first came to the region in August 1963. He spent the first few months of 1965 in Australia, but then returned to Central States in April, where he spent the rest of the year (aside from a two-week stint in southern California in May and June).

Bob Brown - "Bulldog" Bob Brown grew up in Manitoba, Canada, and made his pro wrestling debut in 1957. He first came to Central States in November 1964 and stayed throughout 1965. He did have occasional bookings for the AWA and All-Star in Nebraska during the year, but it was not uncommon for wrestlers in the territory to work for those promotions, as well as in St. Louis and Chicago, on nights when they weren't booked here. His nephew wrestled as Kerry Brown, though they were usually billed in wrestling as father and son as opposed to uncle and nephew.

Bob Geigel - Born in Iowa, Geigel debuted in 1950 and worked several shows in Iowa as well as at least one show in Kansas City that year. His first extended stint in Central States started in February 1958. Some time after Pinkie George resigned from the NWA in 1958, Geigel partnered with Gust Karras and Pat O'Connor to take the promotion over. After retiring as a wrestler, Geigel was President of the NWA on three separate occasions between 1978 and 1987.

The Viking - Bob Morse had wrestled both under his real name and as the Viking since 1958 for numerous territories. He came to Central States for the first of many runs here in October 1965, coming from Mid-Atlantic, where he had been since mid January.

Don Soto - Soto, who also wrestled as Manuel Soto and Cyclone Soto, came to Central States for his first and only stint in October 1965. Prior to that, he had been wrestling in Tri-State.

Jerry Miller - Miller, who also competed as Duke Miller, came here in June after spending the early part of the year in Georgia. Except for a few bookings in 1961 and 1972 this was his only stint in the territory.

Jim Wehba - Wehba is better known as Skandor (or sometimes Skandar) Akbar, a name he started using on the advice of Fritz Von Erich in November 1966. His wrestling debut had been in early 1963, and he was booked on a handful of shows in Tri-State for a couple of years before his first real run in a promotion, that being in Tennessee for Nick Gulas starting in July of 1965. He came here in October.

Victor Rivera - Rivera came here in November after spending a couple of months wrestling in east Texas. He is probably best known for his runs in Southern California (where he had numerous matches against John Tolos and Black Gordman) and the WWWF (where frequent opponents included Killer Kowalski and Toru Tanaka).

Featured Card - On December 9,1965, the weekly Thursday event in Kansas City was a big one. Reigning NWA World Heavyweight champion Lou Thesz teamed with Cowboy Bob Ellis to face Bob Brown & Bob Geigel in one half of a double main event. The other main event saw the Stomper face the Viking inside a cage with Pat O'Connor as the special referee. Also on the card was Victor Rivera vs Jim Wehba, Sonny Myers vs Don Soto and Jerry Miller vs Chris Belkas.