The below chart lists the wrestlers who were regulars in WCW at some point between April 1st and June 30th, 1966. They are ranked by their SPOT (Statistical Position Over Time, a number between .000 and 1.000 representing their average spot on the cards they were booked on; a 1.000 would mean they were always in the main event)

Kowalski was a heel for most of April, but he did wrestle against fellow heel Waldo Von Erich twice early in the month in Melbourne. He turned full-fledged babyface at the end of the month.

Bill Dromo - This was Dromo's only stint in the territory, coming from British Columbia in April and leaving for Hawaii in early July. A few years later, while wrestling in Calgary for Stu Hart, he lent a young rookie a pair of his boots while the rookie was waiting for gear to be shipped to him. That rookie was Wayne Coleman, better known as "Superstar" Billy Graham.

Bob the Bruiser - Listed in newspaper ads and results as Bob the Bruiser, other online sources list him as Bob "The Bruiser" Baker. He only used this name in Australia, back in the U.S. he used a few different names but mostly wrestled as Bobby Graham. He had toured here in 1965 and came back in April after wrestling in British Columbia.

Bruno Sammartino - Bruno spent a few weeks here in April and May. He also was here for a couple of weeks in the fall. Those were his only two trips to Australia over the course of his career. Besides these trips, which occurred in the third year of his first WWWF championship reign, he also toured Japan several times whilst WWWF champion.

Harley Race - Harley came in for a few weeks in June and July. He appears to have won the promotion's tag team titles with Larry Hennig shortly after arrival, and they lost them to Dominic DeNucci & Mark Lewin on July 1st. He had been wrestling for the AWA prior to his arrival, and after this brief stint (his only one for WCW in Australia) he went to All-Star in Nebraska.

Larry Hennig - Hennig came in with Harley Race in June. The two had just lost the AWA World Tag Team titles to Dick the Bruiser & the Crusher on May 28th. While Harley went to Nebraska after their time here, Hennig took a little time off before returning to the AWA. This was his only tour of Australia.

Mark Lewin - Lewin had done two tours of Australia in 1965, and returned in June. He had spent the first six months of the year wrestling in East Texas and Detroit, going back-and-forth between the two. While best known to today's fans as a heel using the names "Maniac" Mark Lewin and the Purple Haze in the 70s and 80s, he achieved fame in the 50s as one-half of a young, matinee-idol babyface tag team along with Don Curtis.

Mitsu Arakawa - Like many of the wrestlers billed as being from Japan, Arakawa was actually born in Hawaii. He served in the U.S. Army before becoming a professional wrestler. He toured here previously in 1965, and returned in April after spending the first few months of 1966 wrestling for the AWA and All-Star in Nebraska. He stayed through mid-July, after which he wrestled in Indianapolis.

Professor (Toru) Tanaka - Tanaka came here in April after wrestling in British Columbia under the name Okiyama. This was the first place he used the Tanaka name, and he teamed frequently with Mitsu Arakawa here. The two had teamed on a couple of occasions in Northern California in 1965, but Tanaka was wrestling as Charley Kawani at the time.

Art Nelson - Nelson left Australia in May and went to Amarillo, though he would return here later in the year.

Dominic DeNucci - DeNucci left in July, stopping in San Francisco before going to British Columbia. He would return here in 1968.

Killer Kowalski - Kowalski left in early July, spending the next couple of months wrestling in Quebec and the AWA. He would return here for three more tours over the next several years.

Nick Bockwinkel - Bockwinkel left in June and went to Hawaii. He would return for one more tour in 1967.

Waldo Von Erich - Waldo left at the end of the April and went to the WWWF. He would return in 1969.

On April 30th in Melbourne, Bruno Sammartino teamed with Dominic DeNucci to face Art Nelson & Waldo Von Erich. Also on the card, Killer Kowalski wrestled Professor Tanaka in one of Kowalski's matches as a babyface. Also on the card was Larry O'Dea vs Bob the Bruiser, Bill Dromo vs Nick Bockwinkel and Mitsu Arakawa vs Clem Lakis. 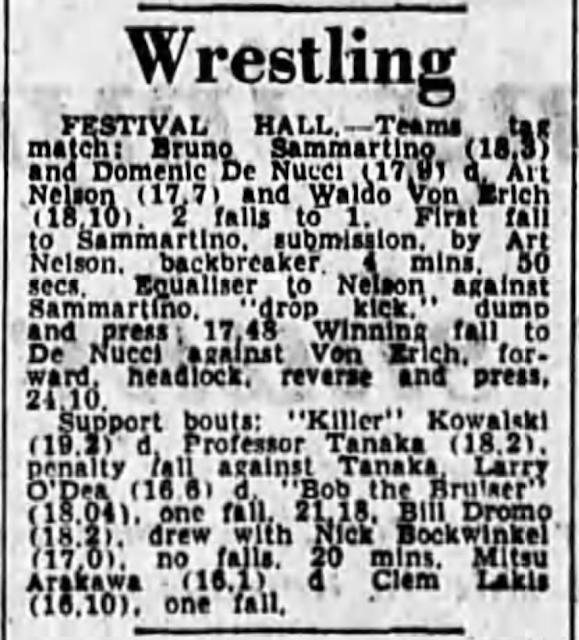