World Championship Wrestling promoted in Australia from 1964 to 1978. They generally brought in big name wrestlers from the U.S. for several months at a time as headliners and used local wrestlers on the undercards. Unlike most of the territories I'll be covering, I am using results from just 2 cities which were run on a weekly basis. They are the two largest cities in Australia, and I feel the sample size is enough to get a good feel for the promotion.

I have data for 81 cards from these 2 cities.

These maps shows the cities and towns the promotion ran in 1966, including not just Sydney and Melbourne but other towns that I found results for via online resources. 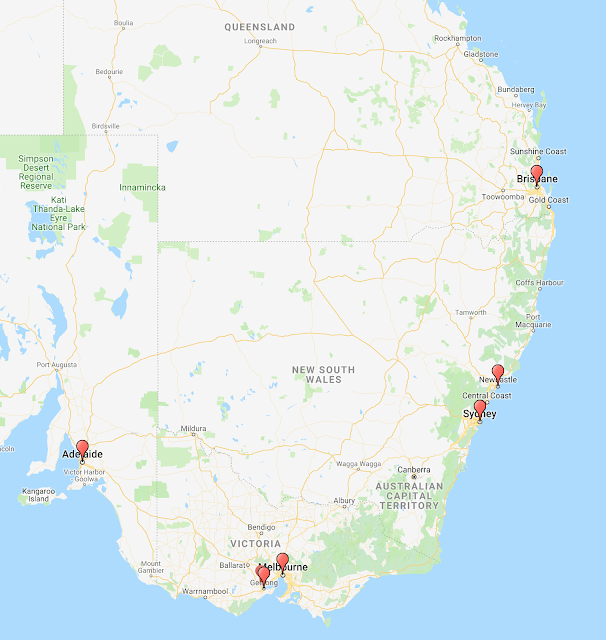 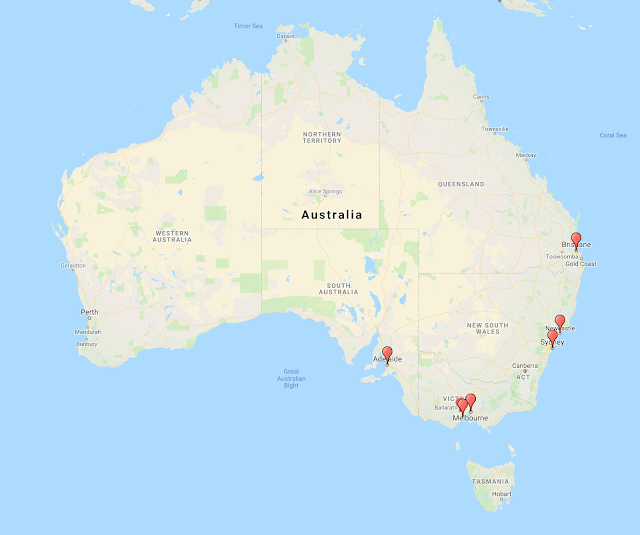 The following wrestlers were on the roster at the end of 1965 going in to 1966 (the U.S. based wrestlers all went home when the promotion shut down for the year after December 10th, so this list only includes the local wrestlers, who typically filled out the undercards)

Larry O'Dea - Larry wrestled in Australia and New Zealand in the early 60's and started with WCW in October 1964. In 1971 he and Ron Miller went to the U.S. (where the spelling of his last name was changed to O'Day) and wrestled together as the Australians in Florida, also spending a couple of months in Tennessee and working a few shows in Amarillo. Almost 20 years later, he came out of retirement to team with his son Jeff at Clash of the Champions XIX in Charleston SC, representing Australia in the NWA World Tag Team title tournament. They lost in the first round to eventual tournament winners Steve Williams & Terry Gordy.

Roy Heffernan - After wrestling in Australia since 1945, Heffernan traveled to the U.S. and teamed with Al Costello as the Fabulous Kangaroos. The team wrestled throughout the U.S. and Canada from 1957 through 1965. Heffernan returned to Australia and started with WCW in July 1965. While Heffernan wrestled against mostly babyfaces at this time and did team with heels, he also wrestled against heels occasionally (see the Featured Card below). I have labelled him as a heel here, but when we move into 1966 he seems to be wrestling as a babyface.

Johnny Boyd - Boyd, also known as Jonathan Boyd, debuted in late 1964. After spending several years wrestling for WCW, he traveled to the states with Norman Frederick Charles III (who may have been his cousin) to compete as the Royal Kangaroos for numerous territories.. He also teamed with Luke Williams in the early '80s as the Sheepherders (sometimes called the Kiwi Sheepherders or the New Zealand Sheepherders) when Williams' regular partner, Butch Williams, returned to Australia. Williams returned to the U.S. in 1983 after Boyd broke either one or both of his legs in a car accident while in the Southwest territory.

Alan Pinfold - Pinfold had been wrestling in Australia for almost 20 years before starting with WCW in November 1964. He wrestled for the promotion until retiring in 1975, at which point he became a referee.

Arthur Openshaw - Arthur appeared for WCW between late 1964 and July 1967. He was originally from Salford in North West England.

Eddie Swan - Swan wrestled for WCW from June 1965 through June 1967. In November 1964 a 26-year old named Eddie Swan came in second place in the Mr. Australia bodybuilding competition (which had been won by Roy Heffernan years earlier). The winner was Mike Hunt, who later became a referee for WCW. I have no confirmation of this Eddie Swan being the same one from the competition, but it seems possible given the timeframe and age.

George Lackey - George wrestled for WCW from November 1964 until May 1969. He may have been of Latvian or Lithuanian descent, and had been wrestling in Australia since 1960.

Featured Card - On December 3rd in Sydney, Mark Lewin and Skull Murphy faced off in a steel cage match. Also advertised was the team of Joe & Tom Hamilton. This was Jody Hamilton and Tom Renesto, who had been in Japan for the previous 2 months wrestling as the Assassins. In the results for this card, Tom was listed as Tony Martin, which is a name he used in numerous territories over the years. I don't believe there are any other listings for him as "Tom Hamilton". They faced Karl Gotch & Ron Reed on the card. Also advertised was King Curtis vs Roy Heffernan and Spiros Arion vs Red Bastien. Opening up the card was Ken Medlin vs Young Zorro.