The below chart lists the wrestlers who were regulars in Amarillo at some point between January 1st and March 31st, 1966. They are ranked by their SPOT (Statistical Position Over Time, a number between .000 and 1.000 representing their average spot on the cards they were booked on; a 1.000 would mean they were always in the main event)

Bobby Hart - Hart was a second generation wrestler who first appeared in U.S. rings in 1964 for Mid-Atlantic. He likely was wrestling for Northland Wrestling Enterprises in Ontario, Canada in the mid-60s, and came to Amarillo in mid-January. He stayed for 3 months, going to Central States in mid-April. He would return to Amarillo in 1971 with Lorenzo Parente; together they were known as the Continental Warriors.

Bulldog Plechas - Danny "Bulldog" Plechas had numerous stints in Amarillo dating back to 1957. Prior to his return in March, he was wrestling occasionally in Central States, All-Star in Nebraska and St. Louis. He was only here for a few weeks, after which he went back to Nebraska and St. Louis. Later in the year he went to Dallas after Fritz Von Erich took over the Dallas/Ft. Worth booking office. Plechas became booker for Fritz at that time. This brief run was his final stint in Amarillo.

Don Jardine - Perhaps better known as The Spoiler (a name he didn't start using until 1967), Jardine was known here as "Butcher" Jardine and sometimes Don "The Claw" Jardine (and on at least one occasion a newspaper ad listed him as Butcher "The Claw" Jardine). Coming at the end of January, this was his first regular stint in Amarillo (notwithstanding a few bookings in May 1965). He had been wrestling in Southern California before coming here.

Dutch Savage - Dutch is best known for his long run as one of the top wrestlers in the Pacific Northwest and the originator and master of the Coal Miner's Glove match. Debuting in 1962, he had been wrestling in Georgia since July 1965 and came here on January 2nd for his first and only run in Amarillo

Treach Phillips - This was Treach's third run in the territory, having been here previously in 1961 and 1963. He had been a regular in Memphis, and after spending a week in Tri-State he came here at the end of January, staying just 6 weeks before going back to Memphis.

Doug Gilbert - Gilbert left in early March and went to Memphis. He would return in 1970 under a mask as the Destroyer.

Tokyo Tom - Tom left at the end of March. I am unable to find any results for him after leaving here (under any of the names he used regularly) until 1967.

Several national stars passed through here during the time period: Art Thomas, Ernie Ladd, Haystack Calhoun, Jake (Grizzly) Smith and Pat O'Connor. Lou Thesz was advertised for one card in Amarillo in February but it was announced that "his plane was grounded" and he did not appear.

Other wrestlers with bookings here during the time period include Alex Perez, Bobby Bruns, Chuck Karbo, Kurt Steiger and a rookie named Jack Brisco (we'll get to him in Part 2).

Women wrestlers with more than one booking during the time period were Cora Combs and Kathy O'Brien.

Midget wrestlers Irish Jackie and Sky Low Low were booked here for a week in March. 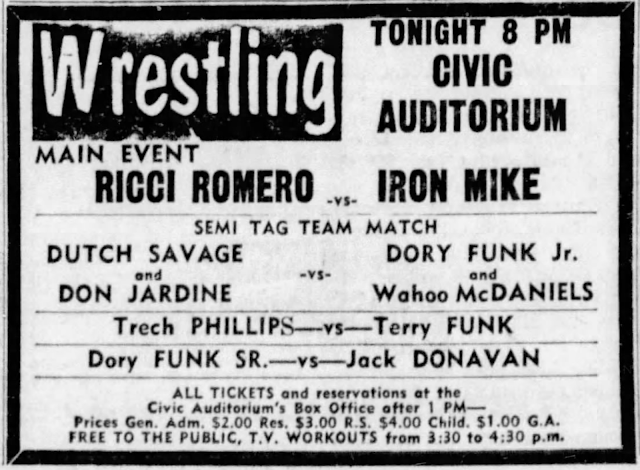