I have data for 286 cards from 15 different cities and towns. 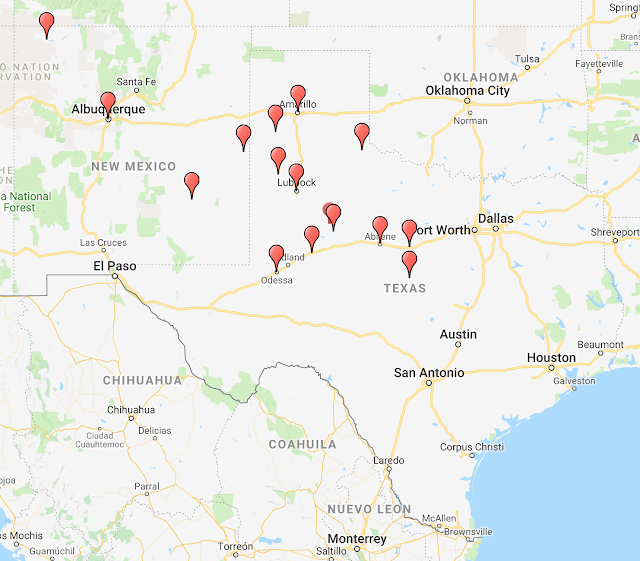 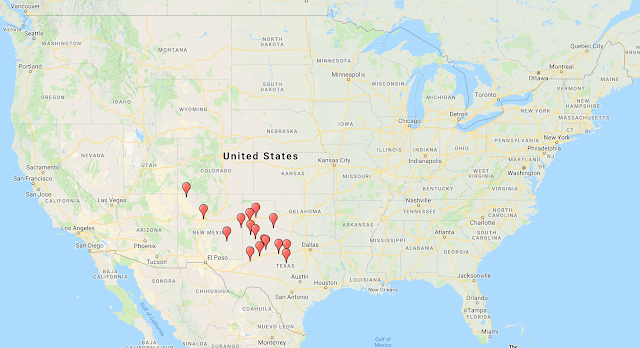 Dory Funk, Sr. - The patriarch of the Funk wrestling family, Dory Sr. had been a fixture in the territory for almost two decades, with his first matches in the territory having been in January of 1948. Behind he scenes he was part-owner of the promotion along with Doc Sarpolis. Dory made several appearances in St. Louis in 1965, but aside from that spent the year here. He was on the shelf for a couple of months after being injured in a car accident in August of 1965 but resumed a regular schedule in October.

Dory Funk, Jr. - The eldest son of the Funk family, Dory Jr. made his pro debut in January 1963. In 1965 he made numerous appearances in St. Louis for Sam Muchnick and toured Australia from March through June.

Terry Funk - Still a senior in college, Terry played the final football game of the season for West Texas State on November 27th and his first advertised booking as a wrestler was 9 days later in Brownfield, TX (against Red Osborne). His first match in Amarillo was three days after that against Sputnik Monroe.

Wahoo McDaniel - Like Terry, Wahoo was playing football in late 1965; Wahoo played for the New York Jets of the AFL, with the regular season ending on December 19th. Just two days later, Wahoo was booked in Odessa to face Gene Kiniski. Prior to the '65 football season, Wahoo had wrestled for Vince McMahon (Sr.) in the WWWF from mid-January through July.

Ricky Romero - Romero had been a top babyface for the promotion for many years. He had four sons who would become pro wrestlers, most notably Jay Youngblood. Ricky spent the first six months of 1965 in San Francisco.

Iron Mike DiBiase - Iron Mike (stepfather of Ted DiBiase) debuted as a wrestler in 1950, making his first trip to the Amarillo territory in 1957. Mike spent the first few months of 1965 wrestling for Big Bear Promotions in Phoenix and Tucson (not to be confused with the Ontario, Canada-based Big Bear Promotions).

Jack Cain - Cain was the manager of DiBiase at this time; prior to that, he had been a referee (and occasional preliminary wrestler) for the promotion dating back to at least November 1963. The earliest reference to him as a manager was August 1965. Cain was wrestling on a regular basis, often as the partner of DiBiase, sometimes in preliminary bouts as a singles wrestler, but always acknowledged as a manager.

Jack Donovan - Donovan, known as "Dandy" Jack Donovan in numerous places, came to Amarillo in October 1965 for his first and only stint in the territory. Prior to that he had been wrestling for Leroy McGuirk's Tri-State territory for a little over a year. Jack was married to wrestler Verne Bottoms.

Tokyo Tom - Tom was better known as Rey Urbano over the course of his 30+ year career, but used the Tokyo Tom name here dating back to 1963. Later in his career he was known as The Great Kabooki (not to be confused with more famous wrestler The Great Kabuki).

The Lawman - Don Slatton was the local promoter in Abilene and the surrounding areas, but had wrestled on a semi-regular basis as The Lawman dating back to September of 1961.

Doug Gilbert - This was Doug's second stint in the territory, with the first coming in early 1961. Doug wrestled under several different names over the course of his almost 30-year career, including Doug Lindsay, The Professional and Redbeard. Teamed with Dick Steinborn in the AWA in 1962 and 1963, where they were known as Mr. High & Mr. Low.

Featured Card - The final Amarillo card of 1965, which took place on December 23rd, was stacked, featuring the first-ever teaming of Wahoo & Terry Funk, plus Gene Kiniski (who would win the NWA World Heavyweight championship from Lou Thesz 15 days later in St. Louis) vs Central States mainstay Bob Geigel and a rare babyface matchup between Ricky Romero and Dory Funk, Sr. Rounding out the card was a womens' match featuring Kathy O'Brien vs Betty Niccoli and Rene Goulet vs Doug Gilbert.