An in-depth look at a title change that probably shouldn't be recognized as such.

UPDATE (1/11/2021): After reviewing the information in this article, wrestling-titles.com updated the title history of the NWA World Junior Heavyweight title to more accurately reflect its' status.

If you've listened to the monthly Charting the Territories podcast (http://chartingthepodcast.com), you have probably heard me discuss my views on title histories and the attempts by wrestling historians to present a clear and linear history.

While much of the time it is accurate to present title changes chronologically, there are numerous occasions over the course of professional wrestling history when this is misleading at best. In particular, I want to take a close look at two such reported title changes, involving Danny Hodge losing the NWA World Junior Heavyweight title to Lorenzo Parente in November 1965 and regaining it in January 1966.

Based on the exhaustive research I have conducted over the last couple of years into the Leroy McGuirk territory, I take issue with this. There are two factors at play:

We'll start with whether or not it was actually a title change. The two faced one another in a title bout on November 23, 1965 in Little Rock, AR. The "title history" listings on Wikipedia, wrestling-titles.com and wrestlingdata.com ALL list this as a title change (see below) 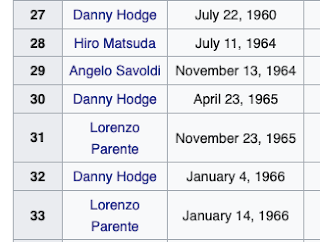 The results printed in the Arkansas Gazette, however, tell a different story.

The wording in this article strongly implies that, at best, the title was "held up". Parente won the third fall via disqualification, and as we all know, titles cannot change hands when the challenger wins that way.

So perhaps we should consider that the title was being held up pending a rematch? That seems well and good until we move forward two weeks, to the December 7th, 1965, card in Little Rock. The two are rematched, and the results follow.

Based on the wording in this article, Parente was champion of record going into the match and retained the title. So perhaps we should go back to November 23rd and say yes, that was a title change. But again, keep in mind Parente won the third fall of that bout by disqualification. And the results on December 7th explicitly state that Hodge won the rematch by disqualification and thus did NOT win the title.
Perhaps looking at the next match between the two in Little Rock can clear it up. On December 14th, the two were rematched in a bout with no time limit.

Once again, we have something different from the previous week. Here, the results seem to state that the claim to the title was "undecided", which lends a little more credence to the idea that the title had been held up on November 23rd, and NOT won by Parente.
At this time, I want to state that titles are props. I understand that we _want_ them to have significance, in that if a wrestler was picked to "win" the title, it was validation of their abilities as a professional wrestler. But realistically, titles served two primary purposes. First, they were an attempt to convince fans that wrestling was a legitimate endeavor. Second, they created "stakes" to build interest in a match. Just like stipulation matches (cage matches, Texas death matches, loser leaves town matches, etc) were used to create interest in a match, in particular a rematch between wrestlers, the same can be said for titles. It's just another tool that the booker and/or promoter had at their disposal to build interest for a match. Whether the beloved babyface loses the title and now must score a convincing victory over his heated rival to regain it, or whether a controversial ending leads to dispute over the rightful titleholder, these are merely tools in a booker's bag of tricks used to put asses in seats.
The following week in Little Rock (12/21), the two were on opposite sides of a tag team match, with Parente & Joe McCarthy beating Hodge & Bill Watts. This built to a "no rules, no referee" match (technically, the referee was stationed outside the ring and only entered to count falls) between Hodge and McCarthy on the 28th, which Hodge won.
This brings us to January 4th, where Hodge and Parente meet once again, this time in a steel cage match. The article leading up to the show again seems to indicate the title is "held up".

The results list Hodge as winning the match, and further say that he "captured the world's junior heavyweight championship" due to the victory. What this means to our original question on whether or not Parente actually won the title is unclear. In either situation (Parente winning the title or it being held up), Hodge's victory here would technically result in him "capturing" the title.
So, at best, the claim of a Parente title reign and subsequent loss back to Hodge is unclear. The match in which he supposedly won the title saw him win the third fall by disqualification. In lieu of further evidence (such as programs from the shows which may have explained the scenario in more detail, or perhaps unearthing TV episodes from the time frame or maybe finding some 'official' NWA records documenting title changes), there must at the very least be an asterisk next to Parente's "title win" on November 23rd.
Now let's discuss the second issue I have with this title change (that may not have actually been one); the issue of whether it was acknowledged throughout the territory. Short version: it was NOT.
The disputed Little Rock title change was on November 23rd. The very next night in Springfield MO, Hodge was billed as champion for a title defense against Parente. The following night in Wichita Falls TX, Hodge was billed as champion for a defense against Jerry Kozak, and the results explicitly state that he retained the title by defeating Kozak. So for the rest of the week, Hodge was still billed as champion.
The following week saw Hodge continue to be billed as champ. Hodge retains his title in Shreveport LA by beating Argentina Zuma and the next night is credited with a successful title defense against Tom Bradley in Monroe LA. On Wednesday in Fort Smith AR, Hodge goes to a time limit draw with Mike Clancy, and the results in the newspaper state that he "retained his junior heavyweight wrestling title". That same night, Parente is in Springfield MO taking on Joe McCarthy, and no mention is made of Parente having won the title. Hodge has two more successful title defenses that week, against Sputnik Monroe in Wichita Falls and against Kozak in Oklahoma City.
On Monday December 6th in Tulsa OK, Hodge and Parente are advertised against one another in a title match. The champion going in is not explicitly listed, but Hodge won the match. In Fort Smith on the 8th, he has a rematch against Clancy, this time with a 90 minute time limit (based on their time limit draw the previous week). Hodge wins that match and is explicitly said to have retained the title. This continues all the way through December and early January. Hodge is clearly billed as champion in every other town on the circuit, while Parente is never billed as champ.
I've often said that professional wrestling in the territorial era is a long-term, overarching narrative, and that each individual town (or more accurately, television market) has its own version of that narrative, which can be slightly different in some. Picture one WWWF fan living in New York and one in Boston. If Bruno Sammartino has three title defenses at Madison Square Garden against a particular heel but that same heel only gets one title shot in Boston, the fan living in New York may deem them a "bigger threat" to the title, because the feud lasted longer. Keep in mind the territories seamlessly interwove local promos/interviews into the TV show in each market. So the New York fan sees interviews for much of that three month period focused on Bruno and this particular opponent, while the fan in Boston likely only got a few weeks of it. If you asked each fan who they thought Bruno's toughest challengers were, you might get different answers. And each one is right, based on the narrative they were fed through the TV programs and their local house shows.
It's clear from this that the title change (or title dispute) between Lorenzo Parente and Danny Hodge was ONLY acknowledged in the Little Rock market. To a fan living in Shreveport or Tulsa or Oklahoma City or Fort Smith, Danny Hodge was the champion in all of November and December.
If we want to truly present an accurate version of wrestling history, we must acknowledge the idiosyncrasies unique to pro wrestling. And in this case, the most accurate way to describe the history of the NWA World Junior Heavyweight title from November 1965 to early January 1966 is probably to say:
"Lorenzo Parente may have won the title in Little Rock on November 23 1965, but this claim is disputed and the title may instead have been held up pending a series of rematches which saw Hodge score a decisive victory on January 4th. This storyline was only acknowledged in the Little Rock market; in the rest of the territory Hodge was billed as champion throughout the time period"
And perhaps over time as historians and researchers uncover new information, that could change. We might find old TV interviews from Little Rock with Parente actually in possession of the title or the announcers clearly stating that the title claim is disputed, or we may dig up correspondence between McGuirk and the NWA. If that information comes to light, it's incumbent to acknowledge it.
And don't get me started on the January 14th, 1966 title change where Parente (again?) won the title from Hodge; according to The Daily Oklahoman, he actually won it on the 7th.
Unless he didn't.
But that's a story for another time. 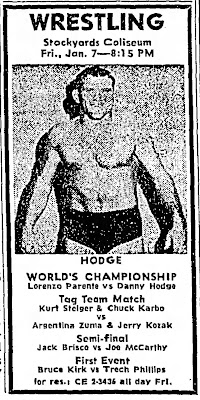 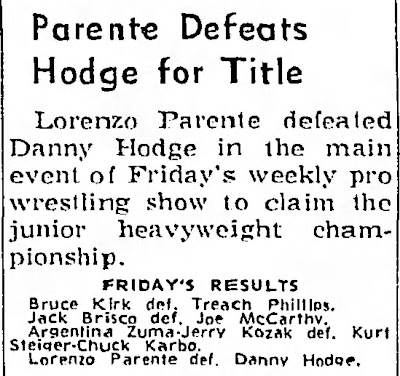