Explanation of the new "Bookings per Week" data point

As part of my continuing effort to cram as much (potentially) interesting & useful information as possible into the charts we produce on a regular basis, I have added a "Bookings per Week" column to the SPOT Ratings chart.

Here is the SPOT Ratings chart for the McGuirk territory in the 4th quarter of 1976. Note the column to the far right, labelled "Bookings Per Week". 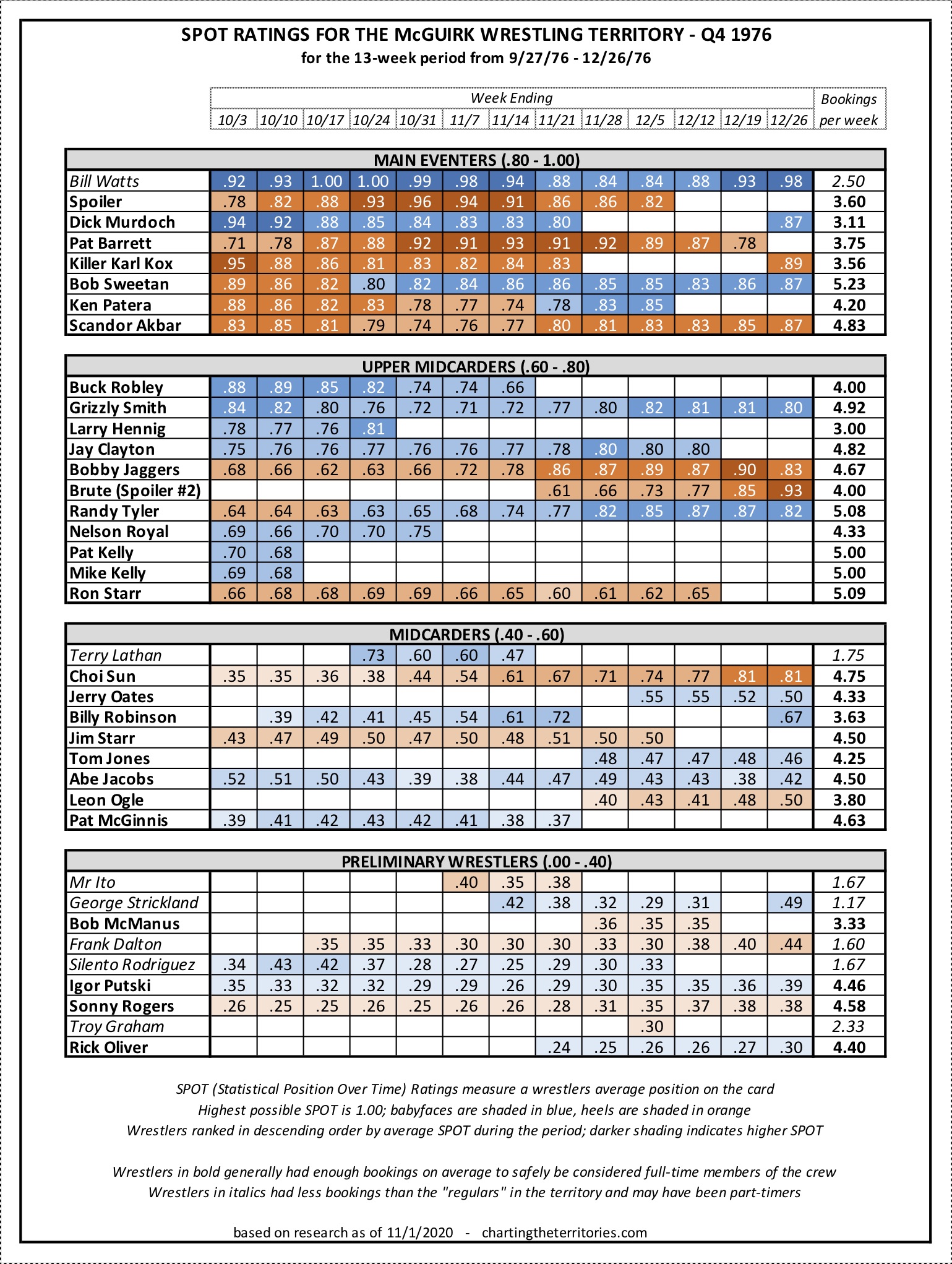 Keep in mind that in virtually all cases, we are dealing with incomplete house show records. Because of this, it's difficult to draw a line in the sand and say "Wrestler A was a full-timer and Wrestler B was a part-timer". For the most part, a wrestler who is listed in the SPOT Ratings chart is a "regular" in some way, shape or form, even if they're not working every single night of the week. But there are exceptions, because I'd rather include a couple of part-timers than accidentally omit some of the regulars who should be on the list.

To make it easier to follow, I have also used bold type and italics to differentiate between the wrestlers who are booked regularly vs those who are booked less frequently. The cutoff will vary from territory to territory and time period to time period, based on how complete the data is.

Let's dig in to the above chart and look at the differences between the "regulars" and those who are likely part-timers. Of the 37 wrestlers listed, 30 are noted as "regulars" by having their names in bold, and 7 are "possible part-timers" and their names are in italics. Of those 7, 5 are considered Preliminary Wrestlers by their average SPOT Rating, one (Terry Lathan) is a Midcarder, and one (Bill Watts) is a Main Eventer.

In the case of Bill Watts, we know that Bill was not only one of the top babyfaces in the territory, but he also owned a significant portion of the territory at this point in time, and if he wasn't the "booker" outright, he most definitely had a hand in the booking. So it's understandable that his behind-the-scenes duties were significant enough that he couldn't wrestle every night of the week. We can also speculate that as a part-owner, he didn't need to wrestle every night of the week, and was saved for shows in larger towns or for periodic big angles that took him around the loop. I have looked at this Bookings per Week stat for other territories, and this is a very common occurrence. The top babyface star who is also the owner of the territory and/or the booker is often wrestling less than the rest of the crew. Think Dory Sr in Amarillo, Fritz in East Texas, Eddie Graham in Florida, Verne in the AWA, etc. In some cases, it is also due to them being "in demand" and working big shows for other territories or places like St. Louis or Houston which brought in wrestlers from all over for their shows.

Terry Lathan is an example of a wrestler who is for the most part confined to a specific geographic portion of the territory. It's generally acknowledged that Grizzly Smith was booking a lot of the towns in Louisiana for much of the early and mid 70s (with Oni Wiki Wiki promoting the towns). Because of the distances between some of the towns in the lower half of Louisiana from the rest of the territory, he sometimes used wrestlers that didn't work those other towns. Another example of a "regionally-booked wrestler" in this territory is Red McKim. For a large portion of his wrestling career, he was working full-time for the Tulsa Fire Department and would only take bookings close to home or on the weekends or by using vacation time. So there are numerous occasions where he's wrestling on a part-time basis, but still regularly enough to be considered a part of the crew. We can also note that this SPOT Rating varies significantly from week-to-week, much more so than most of the "regulars". With a lower number of bookings, this leads to a greater variance in the weekly SPOT.

Most of the "possible part-timers" were Preliminary Wrestlers, and there is significant evidence that this is the case in a lot of territories at different times. On some occasions, preliminary wrestlers who were not booked for a match were still at the shows, either to observe and learn, to be able to fill-in should an advertised wrestler not make the show, and on some occasions they would work as a referee. I previously did a deep dive into the first several years of Buddy Landel's career, and when he was working as a preliminary wrestler he absolutely was booked on less shows than a lot of the other wrestlers in the same territory at the same time. I have also seen evidence of the WWWF having separate "groups" of preliminary wrestlers in different part of the territory; there was a crew of preliminary wrestlers that mostly worked the shows in New England, a different crew that worked the shows in western Pennsylvania, and so on. Gulf Coast at times had full-timers that worked the entire territory, covering the Florida panhandle and extending into Alabama and eastern Mississippi, and had part-timers that were based in one of those regions.

So looking at the number of bookings per week (which is taken as a straight average for the time period indicated and only considers weeks where the wrestler has at least one booking) can help us quickly identify who were the "road warriors". No, not Hawk and Animal; but the wrestlers who are working night-in night-out throughout the territory. It also helps us get a clearer picture of how complete the data is for the time period. If we generally accept that shows were held at least 6 nights a week, then we can guesstimate the percentage of shows we're missing. Of the 30 wrestlers considered "regulars" in the fourth quarter of 1976, more than half of them have between 4 and 5 bookings per week, and the overall average of the regulars is 4.31 bookings per week. So it would be fair to say the data is somewhere around 75% complete. Where it becomes tricky is that there is not a "set" number of shows per week or even per night. Sometimes they ran two, sometimes they ran three. On rare occasions, they ran four. And on the nights where they usually ran two, every now and then they ran a third show somewhere. And in the McGuirk territory at this point in time, Sundays seems to be a day off for a large portion of the crew most weeks. But not everyone. And not every week.

As we continue to unearth more and more shows, we get a slightly clearer picture of all of this, But in all likelihood, we will never have a "complete" data set. Even the territories regarded as having been more thoroughly researched than the others [WW(W)F, Mid-Atlantic, Florida] seem to be missing a fair number of shows, many of which continue to be unearthed as more researchers work at it, and more newspapers make their archives available online and/or searchable.