In September 1976, the Spoiler and “the Axe” come to town, Tom Jones leaves the area (which WAS unusual), the never-ending NWA World Junior Heavyweight title tourney is almost over & more! 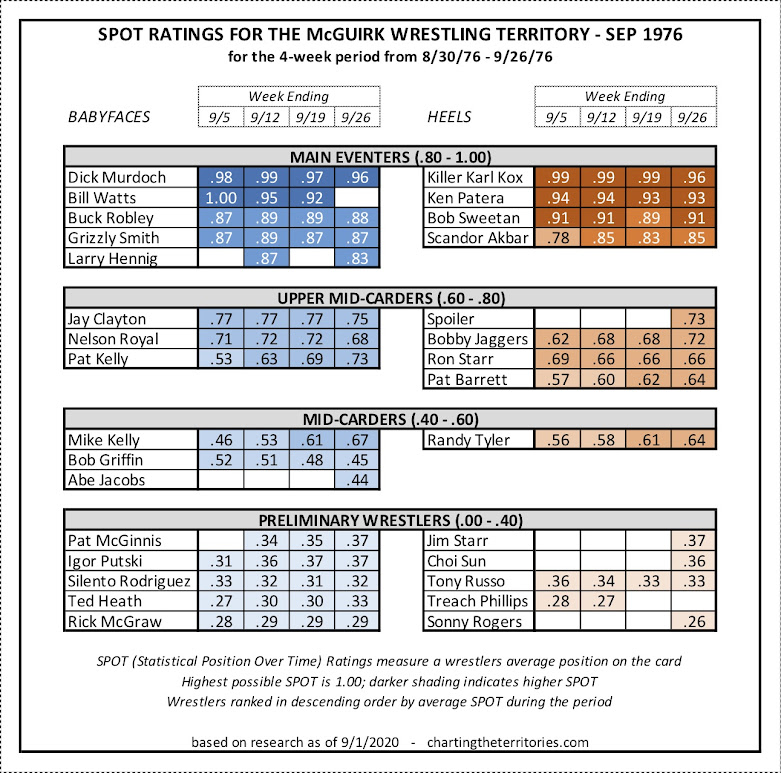 COMINGS AND GOINGS
Newcomers to the territory this month are babyfaces Abe Jacobs, Larry Hennig and Pat McGinnis and heels Choi Sun, Jim Starr, Sonny Rogers and the Spoiler.
Jacobs came here from Amarillo for his one and only stint in this territory. Hennig came in from the AWA for just a few weeks and then went to New Japan. McGinnis came here from the WWWF.
I don’t have much info on Choi Sun. He came here from NWA Hollywood and was aligned with Scandor Akbar. Jim Starr had made some appearances here over the summer as the Medic but started working here on a more regular basis without a mask in September. Sonny Rogers (Laurie Hey, real-life brother of Buddy Roberts) came in from Florida; he had last been here in March ’76. The Spoiler’s last full-time run here had been back in 1973, though he made sporadic appearances in between. He had been in Georgia over the summer and worked a few dates for New Japan in late August.
Leaving the territory during the month were babyface Tom Jones and heels Gene Lewis, John Ravens and Treach Phillips. In addition, Bill Watts reduced his in-ring schedule towards the end of the month.
Jones went to Georgia for a couple of months and would then return here in November. I don’t have any records for Lewis (Gene Petit aka Cousin Luke) until March 1977 when he’s in East Texas. Ravens goes to Gulf Coast, where he works as Lord Raven. Treach Phillips seems to have pretty much retired at this point, though he’s got a few weeks’ worth of bookings here in the summer of ’77 and a handful of matches for a few years after that.
Other wrestlers not listed in the SPOT Ratings: Pat O’Connor came in early in the month for two bouts against Scandor Akbar, winning both (at least one of which was by disqualification).
CH-CH-CHANGES
No title changes this month. Bill Watts still holds the North American title, Bob Sweetan & Killer Karl Kox are the US Tag Team champions and the tournament to crown a new NWA World Junior Heavyweight champion is still ongoing (but almost over). It was not a “bracketed” tournament, but rather a series of elimination matches hodge-podged together in certain towns without much consistency.
-----
Here are the FEUD Scores for the month. 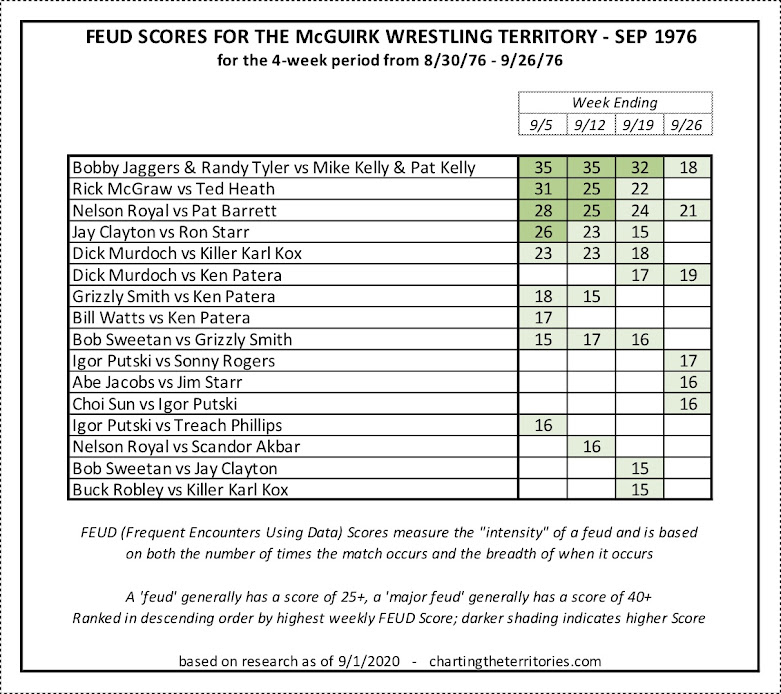