Here's a look at the McGuirk wrestling territory in August 1976: Murdoch moves back up to the top of the cards and gets a few shots at the Funker, Pat Barrett turns heel & more! 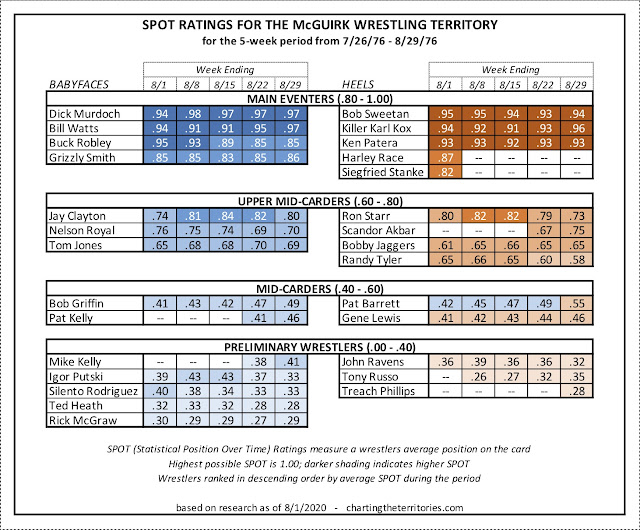 COMINGS AND GOINGS
Newcomers to the territory this month are babyfaces Igor Putski, Mike Kelly and Pat Kelly and heels Scandor Akbar, Tony Russo and Treach Phillips. In addition, Harley Race is booked on just enough shows to be included in the Ratings chart, though he’s not a full-timer here.
Igor came in from Florida while the Kelly twins came in from Ontario. Akbar had been wrestling in the WWWF and Russo came from East Texas. Treach was mostly working as a referee at this point but he is booked to wrestle on a handful of shows for a few weeks.
Leaving the territory during the month were babyface Ted DiBiase and heel Siegfried Stanke.
DiBiase goes to Japan for a tour with AJPW and then to Amarillo. He won’t return to this area until December 1979 (for Mid-South after the split). Stanke goes to East Texas.
Other wrestlers not listed in the SPOT Ratings: Frank Dalton, Larry Hennig, the Medic, Terry Funk, Tommy Tate, women wrestlers Kitty Adams, Leilani Kai, Toni Rose and Vivian St John and midget wrestlers Billy the Kid, Bobo Johnson, Farmer Pete and Little Tokyo.
Hennig came in for a few shows towards the end of the month; he was full-time in the AWA. He comes back here in September for a stint as a regular. Funk came in for a week, defending the NWA World Heavyweight title against Dick Murdoch in Tulsa, Shreveport and New Orleans and against Harley Race in Jackson. Newspaper reports list Funk winning in Tulsa and the Shreveport bout going to an hour draw after each man had won one fall.
The women came in for two weeks in the second half of the month, while the midgets finished up a three-week run early in August.
CH-CH-CHANGES
Role Changes: Pat Barrett appears to have turned heel during the month. While on the babyface side of things, he was occasionally teaming with Nelson Royal on house shows. By mid-month he starts working against him often afterwards so perhaps the turn was specifically against Royal. It also may have been done to add a little spice to the ongoing Junior Heavyweight title tournament. Mike & Pat Kelly come in as a team; they face the other regular tag team, Bobby Jaggers & Randy Tyler, on some house show bouts. The reigning tag champs (Sweetan & Kox) are primarily wrestling as singles on the house shows.
Title Changes: Once again, there were no title changes this month. Bob Sweetan & Killer Karl Kox are the US Tag Team champions and Bill Watts is the North American champ. The NWA World Junior Heavyweight title is still vacant, with a series of elimination bouts ongoing in several cities as part of a tournament to crown a new champ.
-----
Here are the FEUD Scores for the month. 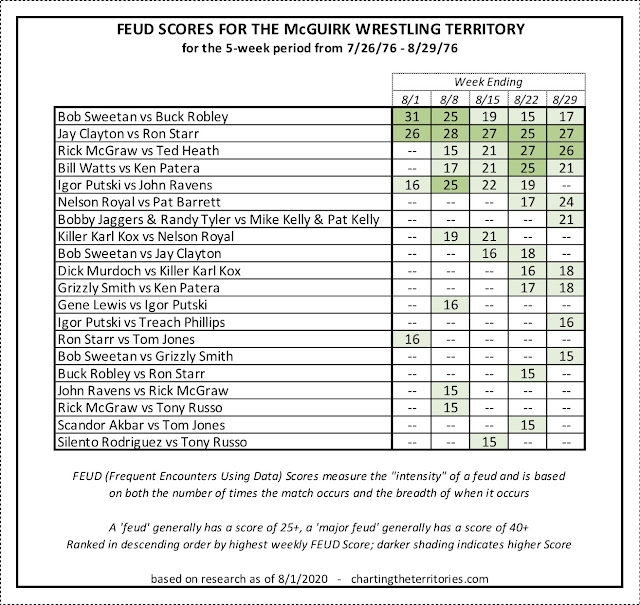