- July 12, 2020
Here's a look at the McGuirk wrestling territory in July 1972: Ivan Putski gets a cousin and Dale Lewis gets a little brother, Dory Funk Jr comes in for a week of World title defenses and goes 60 minutes with Danny Hodge twice and Grizzly Smith once & more!
Here are the SPOT Ratings for the month. 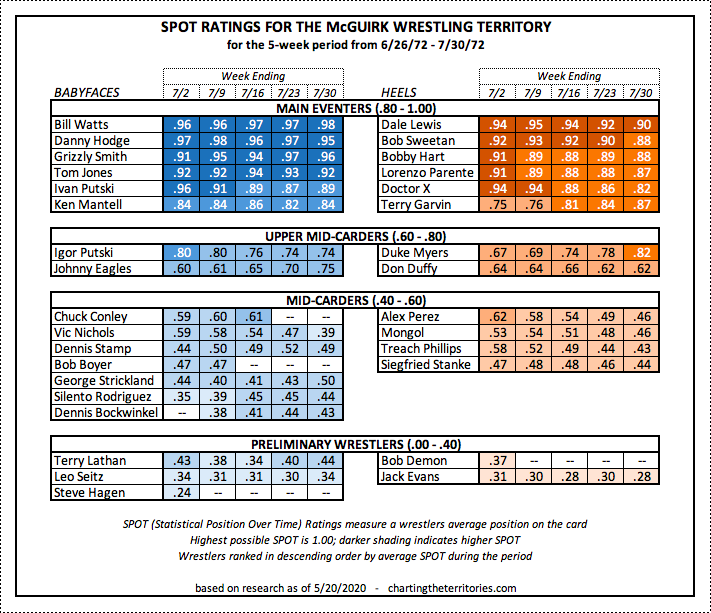 COMINGS AND GOINGS
Newcomers to the territory this month are babyfaces Dennis Bockwinkel and Igor Putski and heel Treach Phillips.
Dennis Bockwinkel is believed to be a wrestler named Dennis O’Brien, who wrestled a handful of matches in the AWA in the early 70’s, then had brief stints here and in Amarillo as Dennis Bockwinkel and another stint in Georgia as O’Brien. Some of the newspaper ads erroneously listed him as Nick Bockwinkel. Nick is in Florida teaming with Ray Stevens for the second half of July, so this absolutely wasn’t him. Nick was a big enough star by this point that he wouldn’t have come to this territory just to work prelims and mid-card matches for a few weeks. Igor Putski is Rick Ferrara, who also wrestled as Beppo Bonnett and a few other names over the course of his career. He came here from the AWA and was billed as Ivan’s “cousin”. Treach returned to this area for the first time in a little over a year. He had been wrestling in the AWA, but also had a brief stint for Nick Gulas right before coming here.
Leaving the territory during the month were babyfaces Bob Boyer, Chuck Conley and Steve Hagen and heels Bob Demon and Gypsy Joe Rosario.
Boyer went to the WWA (Indianapolis), where he wrestled as Bobby Bold Eagle. Conley’s name next shows up on some shows in Kentucky for Phil Golden in the fall. I believe his career was over by the spring of ’74. Hagen goes to East Texas. Demon spends a week in Amarillo and then goes to British Columbia. Rosario goes to Japan for a month to wrestle for IWE.
Other wrestlers not listed in the SPOT Ratings: Dory Funk Jr, Bill Cody, Buddy Austin, Gene Lewis, Jim Garvin, Mike Paidousis, Pedro Godoy and the Scorpion.
Garvin is still primarily working as “older brother” Terry’s manager. Gene Lewis (Gene Petit aka Cousin Luke) has a handful of appearances here during the month, his first matches as a pro. Gene would start as a full-timer, billed as Dale Lewis’ brother, in September. He had originally met Dale while in Florida and Dale hired Gene to drive him to the matches. This arrangement continued when Dale came here, and when a couple of wrestlers didn’t show up to a spot show in North Crossett, AR (date unknown but it was likely in late June), Dale gave his driver an extra pair of tights and boots and told him he’d be wrestling that night. This Buddy Austin is not the well-known wrestler Buddy “Killer” Austin, but instead a wrestler local to Louisiana who also wrestled as Bruce Austin. I believe Bruce was his real name but he would use a different first name when he wrestled close to his hometown.
Dory, the reigning NWA World Heayweight champ, was in for a about a week. On a Sunday afternoon show in Shreveport, Dory was disqualified in the third fall for tossing Bill Watts over the top rope. In Tulsa the next night, the newspaper only states that Watts won the match in two falls; likely at least one of them was by diqualification. In Monroe, Dory and Danny Hodge went to a one-hour draw. The next night Dory went to another sixty-minute draw with Grizzly Smith (!!) in Baton Rouge. In Chalmette, Dory was the winner over Watts by disqualification. Finally, in Oklahoma City he went to another hour-long draw with Danny Hodge.
CH-CH-CHANGES
Role Changes: Ken Mantell & Tom Jones are put together regularly as a tag team this month. In addition, Duke Myers & Terry Garvin form a team, as do “cousins” Igor & Ivan Putski. Chuck Conley & Vic Nichols are teaming up as the Scufflin’ Hillbillies, though when Conley leaves (he may have been injured), Nichols stays and works mostly singles bouts.
Title Changes: No title changes this month. Bill Watts is the North American champ, Danny Hodge is the NWA World Junior Heavyweight champ and Bobby Hart & Lorenzo Parente are the US Tag Team champs. The Brass Knuckles title, most recently won by Bob Sweetan in June, seems to have fallen by the wayside.
-----
Here are the FEUD Scores for the month.