- February 25, 2020
For the week ending March 2nd, 1980: The Spoiler goes to Japan but uses a different name there, some background info on Siegfried Stanke, Tommy Gilbert gets some familial backup & more! 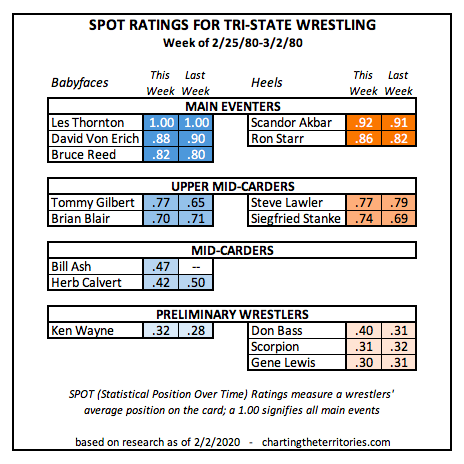 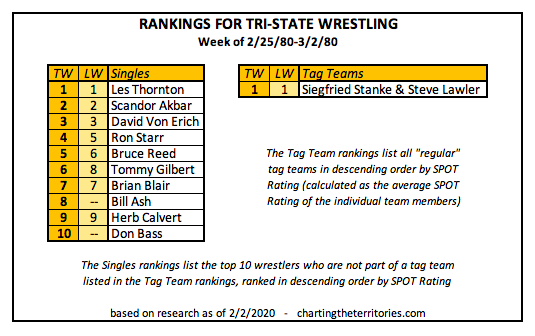 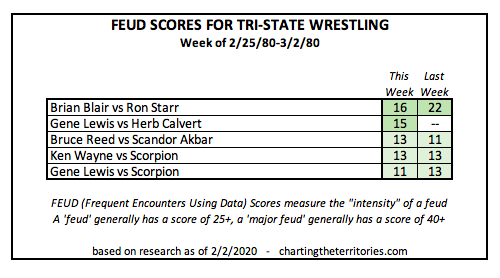 Other wrestlers advertised for shows this week but not listed in the SPOT ratings: Eddie Gilbert. Eddie came in to team with his father Tommy in a losing effort against Siegfried Stanke & Steve Lawler on Monday in Tulsa. The two teams would be rematched the following week. Eddie was a regular in Central States at the time, but came in for at least these two shows and one more later in March.

The Spoiler finished up his run as a semi-regular here last week. He went to New Japan for about a month, where he wrestled as The Super Destroyer. Looking at his past in Japan, he had several tours for the JWA between 1963 and 1973, first using his real name (Don Jardine), then using the name The Butcher for a couple of tours and then The Spoiler for a couple. He debuted for All Japan in August 1977 as The Super Destroyer. It appears he used this name as part of a feud with The Destroyer (Dick Beyer), though he had also used the name in Mid-Atlantic in the mid-70s. This was his first and only tour for New Japan.

The lone newcomer this week is Bill Ash. It looks like Ash's last full-time stint was in Southern California in early 1979. He had worked for McGuirk in the past, with his last run ending in June 1977.

Part-timers David Von Erich and Les Thornton and manager/wrestler Scandor Akbar occupy the top spots in the Rankings this week, which gives you a general idea of the talent roster. Babyfaces Bruce (Butch) Reed and Brian Blair are still relatively inexperienced, with both in their mid-20s at the time. Ron Starr is 29, while Steve Lawler is probably in his early 30s. Tommy Gilbert and Siegfried Stanke are both around 40, making them the veterans of the crew.

Stanke, real name William Lehman, got a late start as a pro, debuting in 1972 at the age of 34 after spending a few years playing football in the Canadian Football League and for the San Antonio Toros, who were part of the Texas Football League and (for one season) the Continental Football League. Gilbert faced Stanke in a loser leaves town match on Wednesday in Springfield, with Gilbert winning the bout and sending Stanke packing (though he actually finished up the following week in Tulsa). After his wrestling career ended, Lehman returned to his alma mater Texas Lutheran College (which was renamed Texas Lutheran University in 1996) to coach football and both men's and women's tennis.