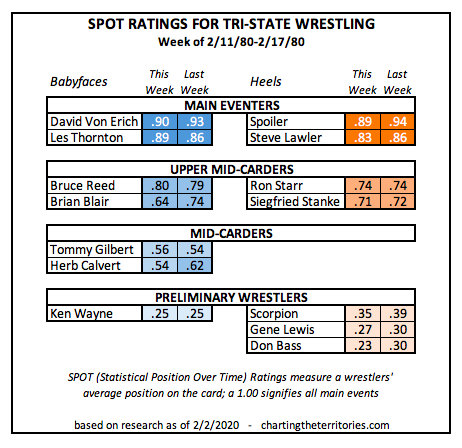 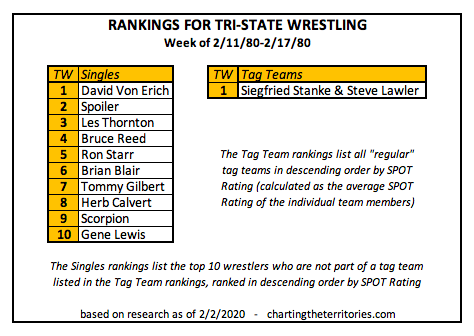 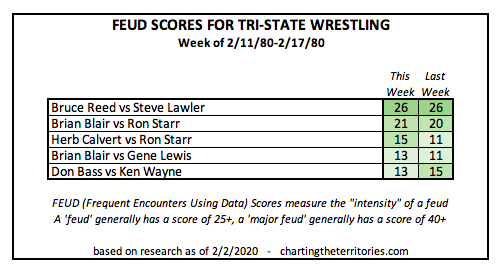 Other wrestlers advertised for shows this week but not listed in the SPOT ratings: Kevin Von Erich and women wrestlers Judy Martin, Kandi Malloy, Leilani Kai and Vivian St John.

Bill Irwin and Don Factor left the territory. Irwin went to Mid-South and I've got no information on the whereabouts of Factor after leaving here.

The Junior Heavyweight title tournament finally came to an end this week, with Ron Starr defeating Les Thornton in Tulsa to win the vacant title. This is recognized as the NWA World's Junior Heavyweight title, previously held by Nelson Royal. In a mildly interesting note, the tournament actually started _before_ Royal vacated the title (sometime after October 5th, 1979; the first tournament match here was on September 10th).

The Rankings show that while Siegfried Stanke & Steve Lawler (the US Tag Team champions) are teaming up regularly, there is no steady babyface team opposing them. Besides David & Kevin Von Erich once this week, they are facing various combinations of babyfaces Bruce Reed, Herb Calvert and Tommy Gilbert. All three of those wrestlers are also booked regularly in singles bouts, so the most logical thing to do is to count them as singles wrestlers.

Herb Calvert has been moved down the cards significantly. Four weeks ago his SPOT Rating was a .83, putting him in the Main Eventer category. Since then, it's fallen to a 54 and he's slotted as a Mid-Carder. As I've mentioned previously, Calvert wrestled for the University of Oklahoma as a heavyweight for a couple of years. After a brief pro wrestling career, he became a Deputy with the Tulsa County Sheriff's Department and later worked for a vending machine company.