- February 25, 2020
For the week ending March 2nd, 1980: A bit of history as JYD has the highest SPOT Rating in Mid-South this week for the first time, Bull Ramos and Iron Mike Sharpe square off in various stipulation bouts, DiBiase defends the North American title against Mike George and Ernie Ladd & more! 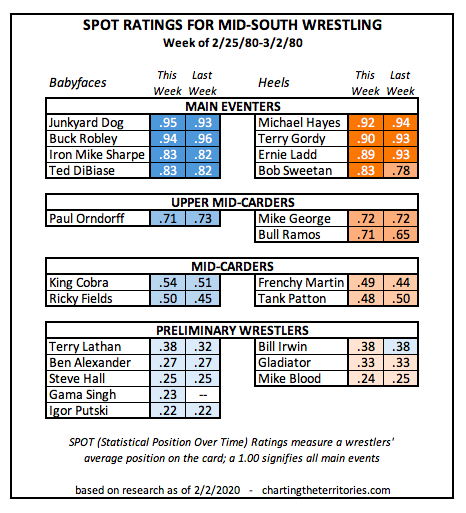 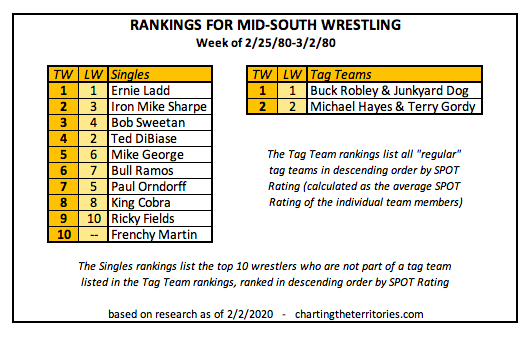 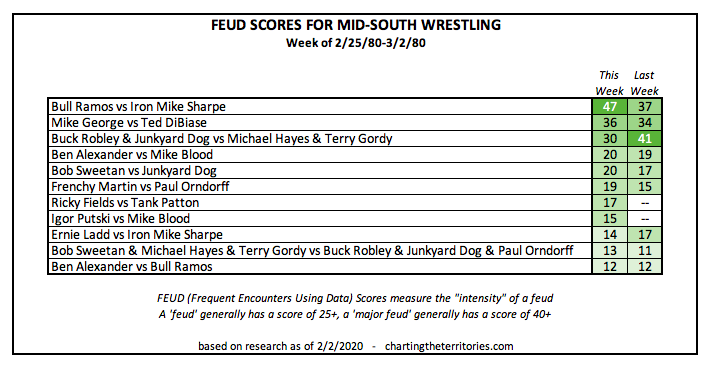 Two changes to the roster this week. Gama Singh is added to the roster. He's not technically a full-timer, but is booked on enough house shows over the next few weeks to be considered a regular. Singh, best known for his run in Stampede Wrestling, is the uncle of Jinder Mahal and currently works for Impact Wrestling as manager of the Desi Hit Squad. The other change is Bill Irwin moving to the heel side of the roster. After a couple of weeks positioned as a babyface, Irwin is now booked against babyfaces more often than not.

For the first time, Junkyard Dog has the highest SPOT Rating on the babyface side, jumping above Buck Robley. In an interesting parallel, this is also the first week where Michael Hayes & Terry Gordy are 1-2 in the SPOT Ratings on the heel side, with Gordy edging out Ernie Ladd. While the feud between JYD & Robley and the Freebirds is on the downswing (their FEUD Score fell from a 41 to a 30 this week), they are still the "top dogs" (pun intended) in the territory.

The biggest feud is between Iron Mike Sharpe and Bull Ramos, with a FEUD Score of 47. Both Sharpe and Ramos move up the Rankings, with Sharpe now #2 in the singles rankings and Ramos moving up to #5. Sharpe and Ramos faced off this week in Baton Rouge, Jackson, Shreveport and Loranger, with Jackson being a no-DQ bout and Shreveport being a Texas death match (with Ramos winning).

Ted DiBiase falls from #2 last week to #4 this week, though he is still the North American champ and still feuding with former champ Mike George. DiBiase defended the belt against George in Monroe and Houma. A no disqualification match in Baton Rouge may have been non-title, and I'm not sure if their match in Biloxi was for the title or not. DiBiase also defended the belt against Ernie Ladd in Shreveport, with DiBiase winning.